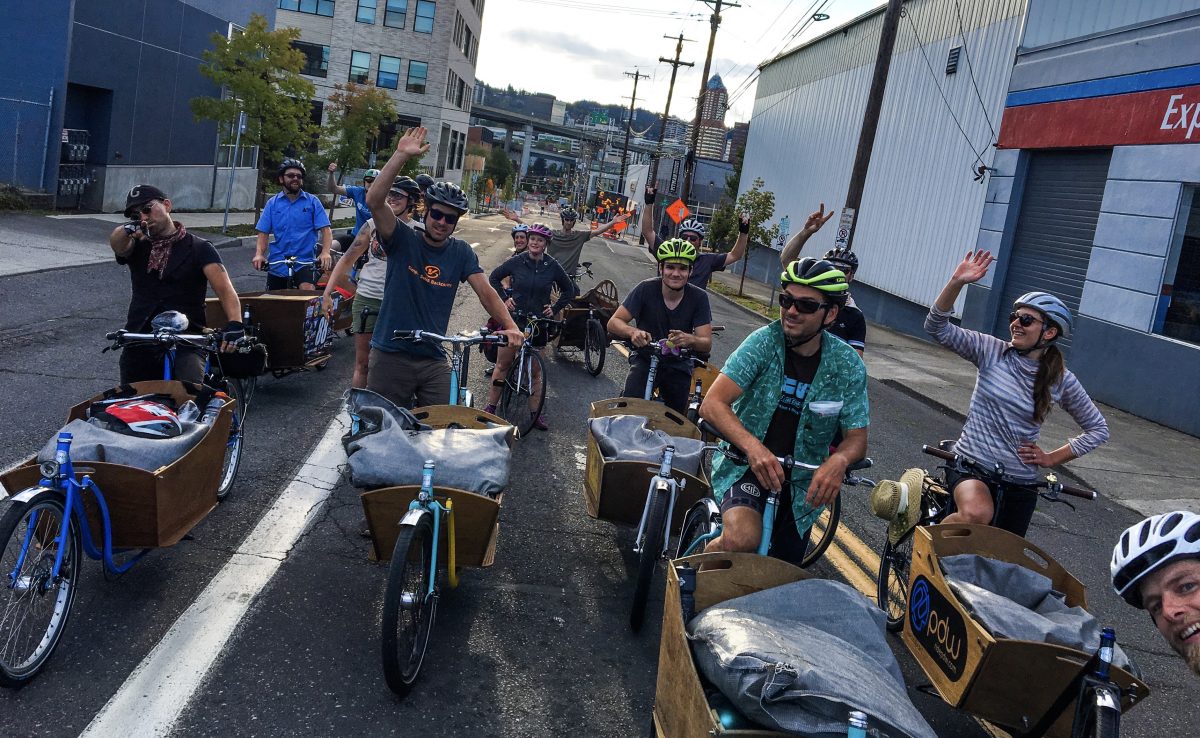 Using bikes to deliver hops from the valley to Portland — that’s what the Fresh Hop Century is all about.
(Photos: J. Maus/BikePortland)

We’ve been covering the fun connections between Portland’s vaunted beer and bike cultures for many years.

Last weekend we think it reached a climax.

Bright and early on Friday morning we met up with a group of about 17 people in the parking lot of Velo Cult Bike Shop & Tavern in northeast Portland for the third annual Fresh Hop Century. The event was dreamed up by Base Camp Brewing co-founder Ross Putnam and Metrofiets cargo bikes owner Phillip Ross. It’s a simple idea: Get a bunch of people to ride cargo bikes 50 miles or so into the Willamette Valley, pick up a few hundred pounds of fresh hops right off the vine and then ride them back to Portland to make some beer.

Amazingly, everything went pretty much according to plan.

We rolled out en masse with 13 Metrofiets cargo bikes — enough of a footprint to easily ride in a full lane of Sandy Boulevard during the morning rush-hour. After a brief stop at Base Camp Brewing where Ross Putnam picked up a few beers for the road we headed south along the Willamette River toward Oregon City. Once we got to Oregon City we veered inland and our route was adjacent to bucolic farms and rural backroads all the way to Salem.

Our destination was GeerCrest Farm, a homestead that was established in 1848 and has remained in the Geer family ever since. Just the second land grant ever awarded, the house that still stands on the land was completed in 1851 — nine years before Oregon became a state.

If the name Geer sounds familiar, that’s because we’ve written about Theodore Thurston “T.T” Geer several times here on BikePortland. T.T. Geer was Oregon’s governor from 1899 to 1903 and was well-known for his love of bicycling. In fact he would often ride the eight miles from his home on the farm to the state capitol.

Today the farm is still owned by a descendant of the Geer family and it’s run as a nonprofit historical society. Full-time staff do educational and outreach programs to help instill an appreciation and understanding of pioneer life in schoolkids and anyone else who’s interested.

GeerCrest was the perfect place for the Fresh Hop Century to spend the night. We rolled in around 7:00 pm (after making many long and relaxing stops on our 54 mile journey) and the staff had a wonderful dinner waiting for us. As the sun set on the horizon we enjoyed the garden, the wrap-around porch, and a deep sense of Oregon history. Adding to the vibe was Velo Cult owner Sky Boyer who surprised us with cold beer from a keg in his new mobile party trailer (watch for it at a bike event near you).

After sleeping on the porch of GeerCrest farm we woke up early with a solid day’s work on our minds. We enjoyed coffee from Charlie Wicker at Trailhead Coffee Roasters (who heroically pedaled his coffee-making cargo bike down in order to serve us) and then went into the farmhouse for a breakfast lovingly prepared by the GeerCrest staff.

We soaked up and appreciated every minute spent around the breakfast table, sitting in the same room where the Geer family hosted dance parties and social gatherings over 100 years ago.

Reluctantly, we said goodbye to our new friends at the farm and headed to another farm to the north in Silverton where we would fulfill the destiny of the Fresh Hop Century.

At Goschie Farms we met Gayle Goschie, who greeted us with a glass of fresh-squeezed pinot noir grape juice (that still had a few seeds in it). Goschie Farms is one of the oldest and most well-regarded hop farms in the country. Gayle’s grandparents planted its first crop in 1904 and they haven’t missed an annual harvest since (yes that’s 112 straight years). “Prohibition slowed us down a bit,” Gayle explained to us, “But we made up for it by shipping overseas and bottling tonics and tinctures.”

Gayle was a fount of knowledge about hops. And as beer lovers eager to meet the hops we’d ridden over 60 miles for, we were hanging on every word. When Gayle led us into a shed where the hops were dried and then baled for shipping we were like kids on Christmas morning. Mounds of fresh hops 20 feet high and that wonderfully distinct smell was everywhere.

As we took selfies with piles of hops and soaked in the moment, Gayle explained why the connection between her farm and craft beer brewers in Portland is so special. “There are only a few places in the world where we can use these fresh hops,” she said. Because the useful part of the hop — a powdery, pollen-like substance in the middle of a leafy outer shell — only stays fresh for a few hours, having the farm and the brewery close is essential.

Having breweries close to her farm that can use fresh hops, “Is a beautiful thing,” Gayle said.

Another beautiful thing was seeing one of the cargo bikes parked right under one of Gayle’s hop conveyor belts. It was the highlight of the trip and I don’t think any of us stopped smiling for the entire day after that. After that we loaded up 13, 20-pound bags of fresh Cascade hops and set off for Portland.

Once back at Base Camp, one of the brewers was ready and waiting. He grabbed the hops off our bikes, loaded them into giant, long tea bags and stuffed them into a huge vat where Base Camp’s forthcoming fresh hop ale was already brewing.

It was high-fives all around. We were all proud to be a part of this amazing process that tied together many parts of what makes Oregon great in such a fun and meaningful way.

All that’s left is to drink the beer we helped make. And there happens to be a special farm-to-table dinner event this Saturday (9/10) at Base Camp (everyone’s welcome!) where the new beer will be poured and our friends from GeerCrest and Goschie Farms will join us to celebrate the harvest.

Special thanks to Ross and Phillip for inviting me on the ride! I have a feeling next year’s edition will be even bigger and better.

I am speechless with the awesomeness of this event.

Thanks Bikeninja! It was a metric ton of fun!

would love to see the route used!

We did make one minor modification in that we rode the newly paved trolly trail, which was awesome!

Looks like a fun ride! Any chance BikePortland subscribers can get a discount to this event? $40 seems steep for a beer event.

Actually, this is relatively cheap for a brewer’s dinner-type event, which usually cost more lke $75-100.

Looks like a fun ride, though it seems like you could get all 13 20lb bags on the back of a madsen, maybe even electric: make it back in a couple hours so they’re fresher? (I’ll probably get the special $200 rate for saying that.)

Hey Adam, no discounts for the brewers dinner as this is a fundraiser for the Geercrest farm. However, the Fresh Hop Century beer will be flowing all night independent of the dinner.

Looks absolutely amazing and a lot of fun!!

Actually, this is relatively cheap for a brewer’s dinner-type event, which usually cost more lke $75-100.

Damn…sold my bakfiets too soon…looked like great fun. Made my day.

A fun idea for a good cause, and a nice ride. Well done!

Man that looks like a ton of fun. Let me know when y’all do something like this again. Go Metrofiets !!