(Photos and story by Ted Timmons)

At the end of June, the city passed a policy to prioritize pedestrian and cyclist access through temporary construction zones I talked to PBOT’s Street Use Permits department (CPAC) about the NW 19th and Overton apartments, which had the Overton bikeway closed for many months.


When the developers were up for a renewal of the permit, I sent pictures showing the road blocked off for basic deliveries and blocked off even when it wasn’t being used at all. PBOT was able to encourage some redesigns during the permit renewal, and here’s how it ended…

The bike lane on July 22. It was narrow but short enough that negotiating oncoming bike traffic was easy: 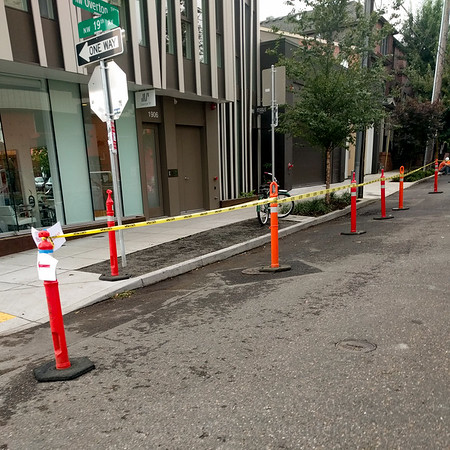 Reserved bike lane on July 22. It is narrow but short enough that negotiating oncoming cyclist traffic is easy. 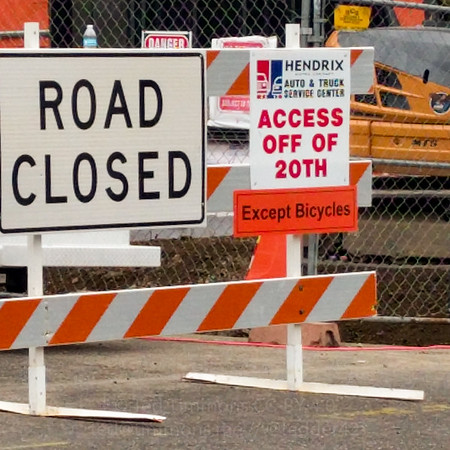 And here’s the bike lane on August 8 with morning bike traffic. A few weeks after the previous picture, it’s wider and better signed: 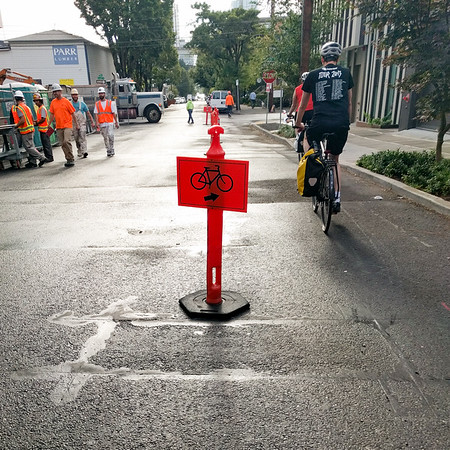 Bike lane on August 8 with morning commuter traffic. A few weeks after the last picture, it’s wider and better signed. 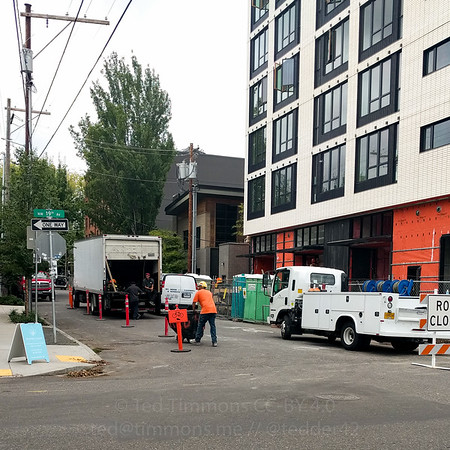 August 10. Bike lane at the left. Yes, the red truck is parked very close to the exit of the lane.

If you’re a hashtag kind of person, this is a good example of #WorkZoneWTF turning into #WorkZoneFTW.

This is needed on deadly West Burnside between NW 4th and 5th Aves.

I’ve noticed this has gotten a lot better over the past few months. Great work, PBOT!

What does FTW mean? I read it as ____ the world. It works most of the time but I don’t think it works in this instance.

Glad to see this is official.

In practice, I’ve found that construction zones are one of the few areas where bike traffic can be treated better than motorized. I’m not sure why, but I suspect it’s a combination of the fact that we need only a fraction of the space and that there is some sympathy for not sending us on a detour.

A few times, I’ve been let through by workers when they weren’t letting cars pass.

One less-than-convenient detour is on SE Harrison, at Hemlock, in Ladd’s Addition, where a large pit is being dug. The street is closed, and cylclists on this greenway route are detoured a block north and back. I just use the sidewalk for that one block between Hemlock and Locust (?). In the evenings, after 4 pm, there is a section of Harrison next to the south curb that is opened for bikes. So, it’s just the morning commute. But it would be nice of that narrow lane were there all the time (or put ramps up to that sidewalk stretch?)

OTOH, the best one in town is on SE Belmont, east of 20th. They’re working on a new building on the south side of the street. In order to provide a walking path, separated from a bike lane, and that separated from the auto lanes by a row of those red and white plastic Jersey barriers, they have removed auto parking on both sides of the street, and also removed one of the two auto travel lanes on this one-way street. It’s an impressive reduction in auto accommodation.