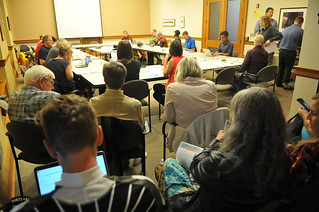 The city’s bicycle advisory committee is different, but you get the idea.
(Photo: J.Maus/BikePortland)

Not everybody loved the local gas tax that Portland voters approved in May. But most Portlanders can probably agree that now that it exists, it ought to be spent as promised.

There’s a strong possibility that the tax might bring in more or less money than expected, or that the city might eventually consider changing the project list in ways that violate the implicit promise to voters that it made when it created the list.

If either of those things were to happen, the main watchdog institution will be a volunteer oversight committee that’s currently recruiting members.

Given the amount of vitriol expressed by some opponents of the tax, it wouldn’t be surprising if many people interested in joining the oversight committee were opponents of the tax for one reason or another. Which is why the application deadline for the committee — this coming Tuesday — is something biking advocates might want to know about.

It requires a sixteen-hour commitment over two years: quarterly meetings of two hours each. Here’s the application. If you have questions, you can email irene.schwoeffermann@portlandoregon.gov.

Also Tuesday, the city will close applications for its general transportation budget advisory committee. This group meets monthly, 4 p.m. to 6 p.m. on third Thursdays, and in addition to giving some influence over staff who make budgetary decisions, it’s a way to become a more effective advocate by learning the nuts and bolts of where the city’s money is. If you’re interested in that position, you can apply for it here.

The project list will be constantly changing as various projects are funded from other sources. Already many listed project are parts of various applications to ODOT or the Feds, but PBOT won’t hear from the agencies for another year or two if Portland will get those funds or not. And priorities change. Get used to it.

I myself served on various advisory committees, including the PBOT Bureau/Budget Advisory Committee for 6 years as the official East Portland rep and worked with the East Portland Action Plan to successfully get nearly $100 million worth of projects funded that wouldn’t have otherwise gotten funded, including $8 million of sidewalks for SW Portland, of all areas!

Another potential definition uses the I-205:
http://www.portlandonline.com/portlandplan/index.cfm?c=52254