We’re excited to share a post written for BikePortland from local author Laura Foster. Foster is the woman behind many excellent guidebooks including her latest — Columbia Gorge Getaways. The post below is adapted from that book.

The three car-free State Trail sections of the Historic Columbia River Highway aren’t the only game in the gorge for scenic bike touring.

This close-to-Portland ride combines cruising through small towns with history, hikes, waterfalls, swimming, plus access to food, ice cream and beer. Pack money, a swimsuit, and a lock for off-bike investigations.

Stevenson’s paved waterfront paths took a big leap last year—right over the river— when the Trail of the Gods (PDF) opened. This route starts in Stevenson at the foot of Russell Street, at Stevenson Landing, a stop for ships on weeklong river cruises. Round-trip to Cascade Locks is 8 miles but you can extend that another 15 miles or more by biking east or west from Cascade Locks.

Stevenson’s waterfront path and Cascade Avenue offer viewpoints, secluded coves, a distillery, restaurant, creek, and other intriguements. When you’ve seen it all, go uphill and turn west on 2nd Street—Stevenson’s downtown core, with shops, ice cream and food. From 2nd at the west edge of downtown, veer right onto Rock Creek Drive; turn left at stone columns at the paved path through Rock Cove, once a delta where Felix Inman milled lumber. It became an island-dotted cove when Bonneville Dam raised river levels in 1938.

The cove is the mouth of Rock Creek, a volatile, gorgeous little havoc-wreaker. Salmon are hanging out in pools in June. Stop at interpretive panels and look upslope to Skamania Lodge, sitting within the great landslide mass whose lower reaches once dammed the Columbia. Keep on the path as it runs west along Rock Creek Road. At the entrance to Skamania Lodge, take the asphalt (and still unsigned) Trail of the Gods west. Follow it to where it becomes fine-gravel Mallicott Road; keep left, then turn right on paved Ash Lake Road, which hugs the shore of Ashes Lake—a creek valley turned lake by rising water levels upstream of the dam, and further impounded by fill for rail and roads. The road was part of the Evergreen Highway, parts of which are now SR 14; curvy parts, like this one, were superseded by straightaways built over fill. It has a sleepy time-forgotten vibe.

The road drops you at SR 14. Cross carefully to a viewpoint of the Bridge of the Gods. Ride the asphalt frontage west to a parking area next to the bridge. Here, a short trail leads to the grave of a man killed at the 1856 Cascades Massacre.

Walk your bike across the bridge* so you can savor the views—you’re above the great Cascades of the Columbia, rapids that barred navigation until the locks at Cascades opened in 1896. At low water rocks are visible, though in June most are submerged by the Bonneville Pool—a humiliating name for a once-wild stretch of river. Over in Washington look up to the head scarps of the great landslide mass that temporarily dammed the river 400 years ago.

You don’t have to pay the 50-cent bridge toll for walkers and bikers ($1 after July 1) until your return.

From the bridge, ride into Cascade Locks for lunch at Brigham Fish Market, the first Native American-owned brick-and-mortar fish market in the gorge. Ride east on WaNaPa Street to Portage Road, which gets you to the river level. Here is Marine Park (PDF), once a U.S. Army reserve. Check out the 1870s locks, hand-cut by Italian stonemasons recruited for the project. When the locks opened in 1896 the town of Cascades became Cascade Locks. At the locks’ peak in 1906, 65,000 passengers a day passed through. The locks became obsolete (and mostly inundated) by Bonneville Lock and Dam. Staircases on promenades along the lock chambers now vanish into churning water. The three U.S. Army Corps lock tender homes date from 1905; each aligns with a chamber gate—two now underwater.

Wander out to investigate Thunder Island, a rocky outcrop enlarged by rock excavated from the lock chambers. On its far side, at low water you’re looking out at the above-water remnants of the Upper Cascades.

From there, ride east on WaNaPa Street and beyond via Forest Lane, Frontage Road and Herman Creek Road to Wyeth State Park, a conscientious objectors camp in WWII. It’s 8 miles to Wyeth. A superb short hike from here is Gorton Creek Falls. Or ride west: starting at the bridge is a 7.5-mile section of the Historic Columbia River Highway State Trail. Ride past waterfalls, more hikes, and out to Bonneville Lock and Dam, where Herman the Sturgeon is always up for company.

Or, once you’ve poked around Cascade Locks’s downtown, lock your bike and do the 4-mile hike from the east end of the bridge up to Dry Creek Falls. It was once the power source for the hydraulic lock gates.

Carfree option: a train-bus-bike trip, with about 30 miles of biking: 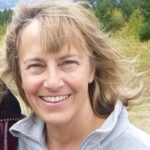 It’s a great time to explore the gorge. 2016 is the Centennial Celebration of the Historic Highway and ODOT has special events planned all summer long. See you out there!

*Unfortunately, the Bridge of the Gods is not a very pleasant place to be outside of a car. Be advised that it’s a stressful crossing, even if you walk your bike.

Great photos! Looks like a fun trip! Got a map of your ride?

The book has great maps–created by an award-winning Metro cartographer–but the specific bike touring routes described here and in the book are not outlined on the maps.

With the new http://columbiagorgeexpress.com/ to get to Portland you’d only have to ride from Cascade Locks to Multnomah Falls on the Historic Highway rather than all the way to Troutdale.

Nice work Laura! I especially appreciate the car-free option; this looks like a fun day in the Gorge.

Glad I read this. More please!

This is excellent! Thanks for the info about Trail of the Gods! I sure wish Bridge of the Gods was better for walking/biking, though.

This x 10! The article says “walk your bike across the bridge” like it’s no big deal, LOL.

thanks folks.. i’ll add a note to the story about the caution/stress of the bridge.

The bridge is part of the Pacific Crest Trail, so walkers are of course allowed and not unusual. The posted speed is 15 mph, and if you walk facing traffic, it’s pretty low stress. Plans are in early stages to add a walkway.

That is great news, a walkway would make a huge improvement. On a road bike with road shoes, walking across the bridge is no picnic; I actually prefer taking the lane and riding across.

I rode this today, the bridge isn’t great but the speed limit is low enough that it isn’t that dangerous. What is dangerous is trying to cross the highway which is 3 lanes wide with the left turn lane at a spot were sightlines are only ok and the posted speed limit is 55mph. If this is going to become a popular ride the state of washington needs to do something to make this highway crossing safer. At a bare minimum the speed limit through this section should be lowered significantly and signs should be posted warning of people crossing the road.

This sounds awesome! The directions are a little convoluted – a Gmap Pedometer map might have been a welcome addition to this post – but otherwise, fantastic!

Also, full of the awesome historical tidbits we have come to expect and love from the awesome Laura Foster!

Anyone know if this route would be good for kiddos? And what age and expertise?

I biked it one windy day with two active 12 year olds who bike only occasionally. It’s pretty flat, all the way, with low or no traffic except for the crossing of SR14 and the trip across the bridge. Would not recommend a bike trailer, as that’d be a bit unwieldy and wide on the bridge, especially if it’s windy.

Thanks Laura! From Bonneville Dam you can keep riding west on the new section of Historic Hwy Trail until you hit the actual Historic Hwy at Warrendale, then its all yours to Troutdale!
Did you include the Klickitat Trail that runs 30 miles up the K. River and Swale Creek? Rough old RR bed, but a spectacular trip. Swale Canyon is so remote there is no cell phone service; its closed in fire season, which seems to be already underway!