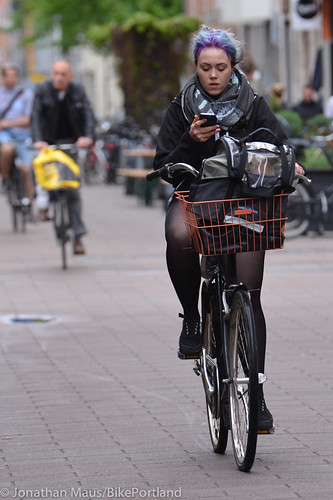 Good morning! Starting today it’s summer vacation season on BikePortland, with first me and then Jonathan taking a little time to decoil. So expect slightly slower posting than usual for the next month or so — though you’ll usually be able to count on at least two posts almost every weekday.

(If you’ve been yearning for a chance to put together a guest post, this means it’s a golden opportunity. Get in touch!)

This week’s Monday Roundup is sponsored by Western Bikeworks. Check out their big 5-year anniversary sale going on now through June 5th.

Distracted biking: Even the Dutch are considering a mobile-phone ban.

Straddle bus: The thing about China’s new bus that drives over congestion is that you could achieve basically the same thing with a dedicated bus lane, says Canaan Merchant.

Sleeping driver: A camera caught a man dozing behind the wheel of an “autopiloted” Tesla Model S.

The enemy is us: “If there is a war on cars in Seattle, it’s a civil war,” writes Tom Fuculoro in a rebuttal to a Seattle Times editorial writer. “Your enemy is basic geometry.”

Transit retrench: The American Public Transit Association, in the midst of a leadership change, should dump its alliance with “asphalt salesmen” and join with “biking and walking advocacy groups,” argues TransitCenter.

Caltrans reborn: Under Gov. Jerry Brown, California’s DOT is pledging “no new highways” and pushing for transportation reform instead.

Illegalizing NYC: 40 percent of the buildings in Manhattan would be illegal to build today: they’re too tall, too dense or too commercial in their use.

Too tall? Portland has lost its way by keeping skyscrapers legal, a local development pro argues.

Opportunity projects: A bill sponsored by U.S. Rep. Maxine Waters would have the federal transportation department measure whether a given transportation project helps or harms “multimodal connections to economic opportunities.”

Davis guru: After 29 years running the bike program at the country’s bike-friendliest university, David Takemoto-Weerts is taking his extensive opinions about bike racks and going home.

“Garden bridge”: London is having a big argument over whether to build a tree-lined pedestrian bridge across the Thames.

Apparently it’s illegal to bike while black in Merced California.

Or it’s illegal to ride your bike on the sidewalk and the police can’t do their job without being accused of racism. It’s ridiculous winning like this that discredit legitimate complaints against police brutality.

For all the supposed buzz about China’s straddle bus, it only reached me today, all as criticism. Never mind ideological purity or other capital costs, this is expensive, specialized rolling stock (TriMet’s 186-rider, semi-custom Type 5 runs ~$4.1M). Not that it ever matters to China, but it’s the kind of money that buys a lot of old, reliable solutions.

Yeah, the straddle bus just has way too many disadvantages: it will still get stuck anytime cars fail to stay in their lanes, it still takes up as much space as a dedicated busway, the vehicles will be really expensive, and putting all the passengers up on the second deck means that the stations will be many times more expensive than conventional bus stops (even BRT bus stops).

Maybe in China you could have people boarding at street level and climbing steps inside the vehicle to reach the main deck, but under American ADA requirements you’d need elevated platforms (with elevators) in order to allow the disabled to board. I suspect even in China you’d need elevated platforms, to allow efficient boarding/deboarding even of large number of foot-based passengers.

For all the supposed buzz, the only physical artifact of “China’s straddle bus” is a scale model. Until now it was a rendering, so I guess this counts as progress, but maybe not all that much.

In old San Francisco the civic fathers used to say, “Boost, don’t knock!” Maybe there’s that sort of culture around purported innovations at this expo, or in China’s business culture generally.

Or maybe it’s a kind of joke, a reductio ad absurdum to provoke questions about our contradictory demands on urban and transportation planning. And some people are so attached to these demands and the ways of thinking that lead to them that we start to take the absurd seriously instead of questioning them!

Too tall? Portland has lost its way by keeping skyscrapers legal, a local development pro argues.

The author hates tall buildings and wants to do something else but cannot articulate what that “else” should look like. Where have I heard this before?

I don’t see any evidence that Portland is over-reliant on skyscrapers. I’m not aware of any built or planned outside downtown, the Lloyd or South Waterfront.

People are looking for a scapegoat for a changing Portland, and new buildings are a very visible thing to point fingers at. It’s obviously a far more complex problem than that.

Middle of the Road guy
Reply to  soren

People talking about apartments on Williams?

Build tall buildings: one result of doing so, is someone gets to work or live in the shadow of the tall buildings. The appeal of high density, loses some of its appeal, when that reality sets in. Here in Portland; no big deal to some people, apparently, but tall buildings in Downtown, have significantly obstructed views across the city from key public parks such as Washington Park, but, well…that’s progress.

Mississippi Ave, here in Portland was, pre-renewall, kind of a decrepit, sordid place in some respects. For Portland city neighborhoods, some of the relatively unique, positive things it had, after the worst of the crud was cleared out, was quietness…and because of the streets mostly single level, or two story buildings…very nice views to the setting sun over the west hills. Replaced, post-renewall/gentrification, with taller buildings that cast Mississippi Ave, and close neighbors to the east, with shadows. Though for some consolation, there’s the increased economic vitality, and tax revenue to the city.

“40% of the buildings in Manhattan would be illegal to build today”: Many buildings in Portland would violate current zoning regulations, but that’s good in many cases (anti-pedestrian blank walls, etc.) that they couldn’t be built today.

Unfortunately, the same regulations would prohibit many of Portland’s nice, older homes and buildings from being built today. Portland tends to kill off the good (but non-standard) with the bad, when it comes to zoning regulations.

And of course, most of those “illegal” buildings didn’t come with sufficient car parking! Can’t have a modern economy without cars…

As for David Takemoto-Weerts’ retirement goal of removing ALL the concrete wheel bender racks (a legacy of the 1970s bike boom)…perhaps the UC system should bronze the last rack and gift it to him…man it would be heavy!

David Takemoto-Weerts got to Davis as the Golden Years were just beginning to end and Davis relinquished its claim as the bicycle capital of the world. It was truly sad to look around the UCD campus and the city of Davis last week and note just how few bicycles were in use compared to when DTW got there. Sure, there’s a lot more people on buses and scores more miles of segregated paths, but only a small fraction of the former ridership.

I really see very little to celebrate in terms of his career. I’m not saying he is solely responsible for the decline, which was underway when he arrived, but he certainly failed to understand what it would take to reverse it. His own department played an out-sized role by bringing in buses to speed people from the many newly-built parking lots to the campus core and building parking garages to facilitate car use while removing bike parking, which made cars and buses the default means of transportation in Davis where previously cycling and walking were most people’s primary choices.

Clearly Oregon has a lot to learn from California, and a couple of items are in this week’s list. Maxine Waters is pushing the envelope on ending the “level of service” bugaboo that prevents transit and cycling amenities from being built and (notorious bike-hater) Jerry Brown is following along with CalTrans in understanding the implications of induced demand. (CalTrans accepted induced demand just this past year in response to peer-reviewed work done at UC Davis.) More than that, CA has actual bike path standards that include clear zones and rideable shoulders for safety, just like other roads get.

Can we raise our game, or are we going to stubbornly insist that the original home of bike lanes, bike paths and the center of the prior bike boom can’t possibly teach us anything?

She needs a helmet for her eventual crash; oh helmets aren’t cool on this website. ***sentence deleted by moderator***. It seems to me that common sense is a misnomer. If it were common every one would have it and presumably use it. There is nothing common about sense. Sort of like helmets, especially for people idiotic enough to text and cycle. Why not juggle and cycle, you could join the circus.