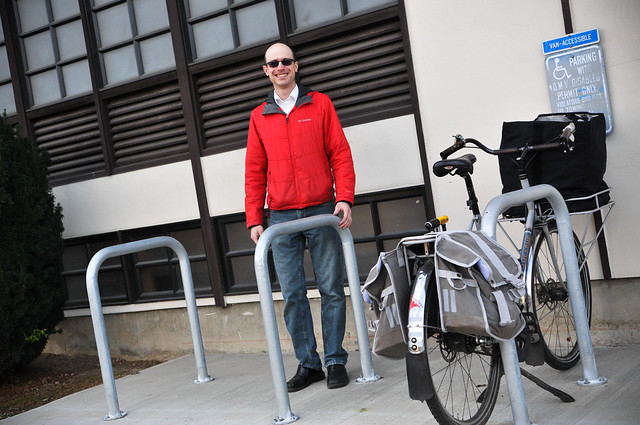 Charles Reneau and the bike parking area he made happen.
(Photos: J. Maus/BikePortland)

Making a place more welcoming to bicycle riders often starts with parking. It’s a basic need for all vehicle users. In the central city you can usually find a staple rack or something else to lock up to; but head out into Portland’s neighborhoods, beyond the main commercial districts, and it’s another story.

Take the Oregon Buddhist Temple for example. Since their attractive building on Southeast 34th just south of Powell Boulevard opened in 1966, members have had no place to park a bicycle. That fact bothered temple member Charles Reneau, so when he got a seat on the board he decided to do something about.


“It’s one more little thing that welcomes them to our temple.”
— Charles Reneau, Oregon Buddhist Temple

I met Reneau outside the temple on Monday. He’s been a member since 2008. “I just live about four or five blocks from here,” he said, as we looked out over the large surface parking lot adjacent to the temple. “So of course I ride my bike.” Unfortunately though, since there are no city-supplied staple racks on the sidewalk out front (the city said it’s too narrow) and it’s not polite to lock to the decorative railings, Reneau would lock up to a gas line pole on the other side of the lot. “I ride every week, so when I got on the board I realized I needed to make this happen”.

The “this” Reneau referred to was a bike parking area.

About a year ago he brought the idea to the temple’s board. None of them rode bikes so they’d never event thought about before. Even so, they were supportive — as long as Reneau promised to lead the charge. And he did.

To Reneau, a lack of bike parking was more than just a personal inconvenience. “I thought, this was an amenity we needed to provide to show we’re engaged with the community not just symbolically, but physically as well.” He went to work with a few other volunteers, one of whom was a contractor. The project began back in August.

They scoped out a space along the side wall of the temple. One of the board members felt it should be behind the building, but Reneau knew better. From reading BikePortland he’d learned that bike parking must be obvious and visible for people who want to use it and for those who it might inspire. The space was bare dirt so they had to dig down a bit and clear out a pad that’s about seven feet deep by twenty feet wide. They poured concrete and bolted in three staple racks (purchased from Portland-based Huntco). 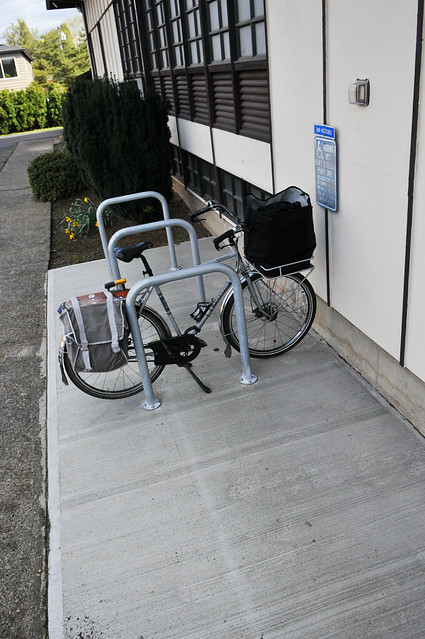 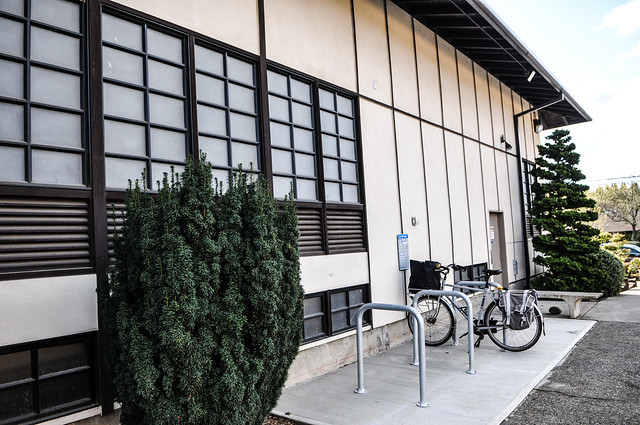 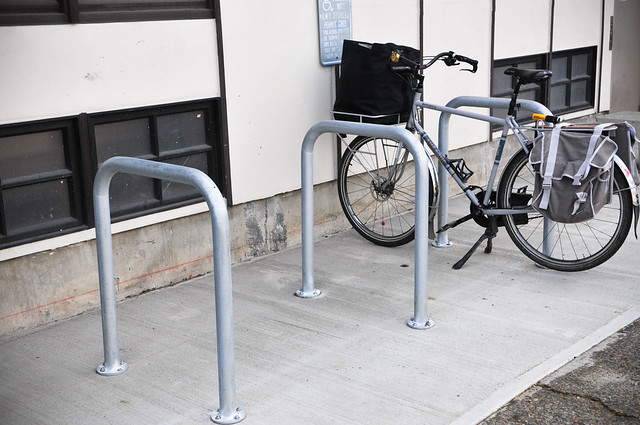 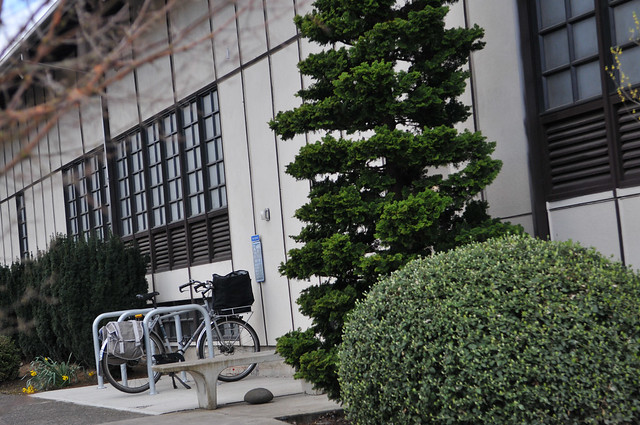 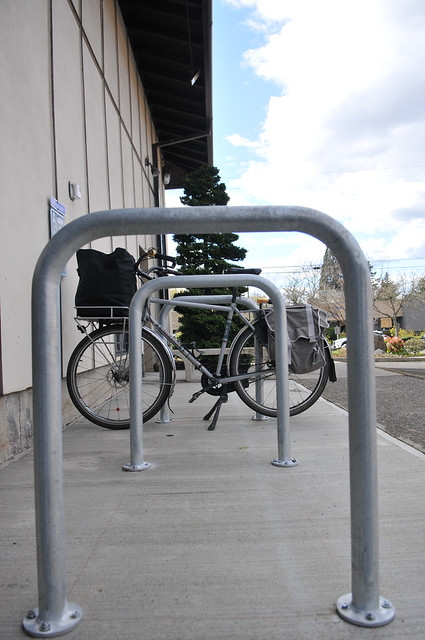 The racks are well-spaced and provide plenty of breathing room for unloading kids or cargo. They left extra room in case they want to add more staples in the future.

The project only took a few days to complete and it “wasn’t that hard.” Reneau said the total cost was about $2,000 for everything including the concrete, rebar and the racks.

Reneau is proud of his bike parking. He thinks it strengthens the temple’s “sangha” or community. “When someone stops to take a look and sees that we have parking for bicycles, it’s one more little thing that welcomes them to our temple.”

Our coverage of bike parking is sponsored by Huntco. If you have a story idea, or would like us to visit the bike parking at your business, please get in touch.

Great looking parking, but why would you ride your bike 5 blocks instead of walking?

I volunteer as a bike mechanic with Bikes For Humanity. When I’m test riding a bike I like to take it to the Buddhist temple’s parking lot because the lot is usually empty and has a bit of a slope to it so I can test gears and brakes without worrying about being hit by a car while riding on a street.

I’m looking to get some racks put in at my work, any tips or websites for the racks and mounting materials?

I bought a triple rack from HuntCo. You have to email them for options. They were super helpful and even delivered the rack.

Here are a few tips:
1. Keep it simple. It’s cheaper and probably more functional to go with a concrete pad and staple racks than with more decorative racks (custom jobs look nice, but why have to sell that increased cost to your boss?). Space for a few racks might just require 7’x7′.
2. We stood up the staples and marked the places where we’d need holes, then we used a corded power hammer drill to drill holes in the day-old concrete. It’s nice to have two people to share some of the workload.
3. After drilling, we cleaned out the holes and used anchors like these Red Heads. They won’t survive a nuclear blast but they would be an absolute pain for a thief to remove all eight of them per rack. http://www.itwredhead.com/mechanical.php

These are great tips!
Sometimes folks like to use racks as signage for businesses, so that can be worth the expense with custom racks.
We use tamper-proof bolts for our flange-mounted racks—thieves can’t get a grip with a wrench. To remove them requires a saw or drill.

Hi Kristen,
We have a lot of different racks on our website, each of them has a spec sheet that should have most of the information you to inform decisions. We’re also happy to answer questions or give recommendations on your space, security level and parking density needs. Give us a ring at 503-224-8700

As for larger guides:

The APBP resource guide is a great general reference: http://c.ymcdn.com/sites/www.apbp.org/resource/resmgr/Bicycle_Parking/EssentialsofBikeParking_FINA.pdf

And the Washington Transportation Alliance also has a great guide:
http://www.wta-tma.org/wp-content/uploads/Suburban-Bike-Parking-Guide_WTA_November2015.pdf

Thank you for selecting staples for bike parking!!! (I wish that NOBODY would produce wave racks anymore… are you listening, HuntCo???)

We’re listening! 🙂 We do recommend Staples and bike corrals over wave-style racks.

What kind of kickstand is that?

It’s an Ursus “Jumbo”.. and it is fantastic. Clever Cycles on Hawthorne sells them.