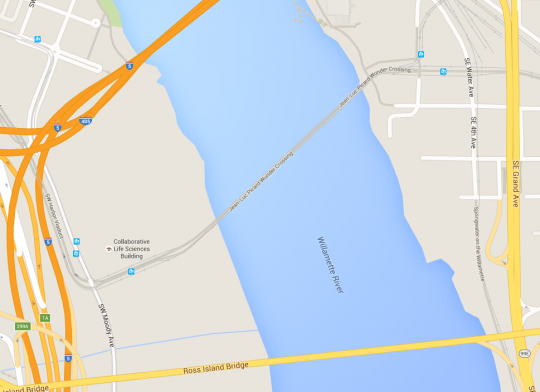 A local beer entrepreneur’s reach-for-the-stars campaign to name Portland’s newest bridge after Jean-Luc Picard has succeeded, at least for one day.

Google Maps currently lists the walking-biking-transit bridge as the “Jean-Luc Picard Wunder Crossing,” just as Owen Lingley suggested in a pair of billboards he put up at his own expense last year.

The bridge’s official name is “Tilikum Crossing, Bridge of the People,” a nod to its human-friendly scale and the region’s history. “Tilikum” means “people, tribe, and relatives” in the local Chinook languages. It’s actually the only major bridge in the city whose name comes from neither (a) an English word or (b) the name of a white guy.

Jean-Luc Picard, meanwhile, was the charismatic diplomat in charge of the fictional U.S.S. Enterprise in the 1987-1994 series Star Trek: The Next Generation, played by Sir Patrick Stewart.

Google Maps includes an option for anyone to “send feedback” about information on a map, including the option to “report a data problem” such as an incorrect placename. Presumably some joking “corrections” have been submitted to the system and approved, and we’re pretty sure more solemn counter-corrections will be on the way shortly.

Even incorrect, Google Maps still has one up on its competitors at Bing Maps. On Microsoft’s map of Portland, the six-month-old bridge doesn’t even exist yet.

Update 3:30 pm: The folks at the local company Ride With GPS have investigated this issue further.

@BikePortland Best day ever in the route planner pic.twitter.com/MSRk897CLO

Meanwhile, Google Maps currently shows the Sellwood Bridge as closed. Perhaps they got the dates mixed up with last week’s big closure. both items show how hard it is, even for the Googliath to keep up with the dynamic transportation system.

I can’t wait until the new bridge is on Street View. Scrolling through the history will be a mindbender.

… or keep up with anything really. Often store hours are inaccurate. Tragedy of the commons.

Can you explain how any of this or what you typed relates to the essay?

Well you see… The article is about Google Maps and they are talking about the algorithm which generates information on the platform.

Every time I tell someone about that bridge, I tell them about my friend, Kirk Reeves, and how his name was nominated for the name of the bridge. To me, it will always be the Kirk Reeves Memorial Bridge.

The Captain Kirk Reeves Bridge would have been more in keeping with community intent.

Quick, someone rename the new Sellwood bridge to the James T Kirk bridge!

I second this motion, but would propose the Capt. J. Tiberius Kirk Bridge to Ecstasy.

And yet my requests to show the new bike lane on Third Avenue have gone unnoticed.

Guess he must be thinking to sort of borrow from what the word ‘wonder’, means, when he uses the lame spelling “…wunder…” in his renaming of the bridge.

Given the bridges rather space age aesthetics…at least compared to the more traditional and industrial architectural design of the city’s other bridges, maybe a name with more of a sci-fi allusion to it, could have made some sense. With its central suspension pylons in the middle of the span, it looks a bit like some kind of docking station for a futuristic spacecraft. ‘Sulu…bring the Enterprise in…slow and easy as she goes…’.

Actually, he’s using the German spelling of the word. It’s not “lame” by any stretch of the imagination.

What I’d like to know is how to tweak googlemaps-for-bikes to give me back the major roads. Whenever I try to map a longer route it sends me on a much longer, more cumbersome series of side roads with hundreds of turns I could never memorize (I don’t have a computer in my pocket or on my handlebars).
It used to be you could manually drag the blue line back to McGloughlin or Foster or 99E, sometimes every few hundred feet(!) But now after you do that for a while a message shows up saying that’s it, no more route modifications! What is up with that?
Anyone know a fix for this malady?

You only get 10 now. Its also a big problem with road trip directions if you want to follow old county/ state roads instead of the interstate. So it affects lots of people who don’t bike, and there still isn’t any movement on it.

Also, I also want it to follow certain roads. Try mapping a trip down the Blue Ridge Parkway on it…

With one more bridge renamed for a white guy, balance returns to the universe.

How about the Lt. Uhura Bridge?

How about we don’t name anything after anybody from now on and keep everyone happy?

FYI: It’s very likely that the rename was initiated in Google Map Maker, not by any action from Google as a company. Also, many of the problems mentioned on this thread could probably be fixed using Map Maker, though some level of expertise is required to do so. I’ll take a look and see if I can resolve some of them through Map Maker.

(Disclosure: I work for Google on Maps, but this isn’t specifically my job; I probably won’t use my Google employee status to escalate any of these issues unless I see something particularly urgent or severe.)