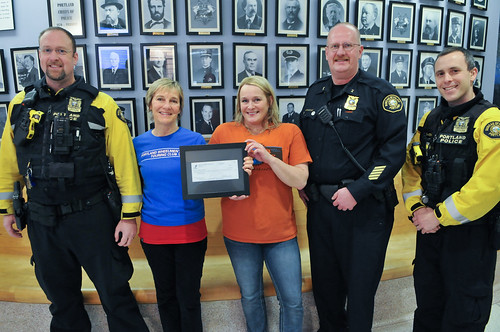 The City of Portland’s Bike Theft Task Force has received a financial boost from the largest bike club in town.

The Portland Wheelmen Touring Club was established in 1971 and currently has 600 members. It’s largest annual event is the Pioneer Century. The club’s current and former presidents, Ann Morrow and Kathleen Hellem, presented a check for $4,000 to the Portland Police Bureau in the lobby of Central Precinct headquarters on Friday. There to receive the check was Police Chief Larry O’Dea and the two officers who lead the bureau’s bike theft prevention and enforcement efforts; Officers Dave Sanders and Dave Bryant. The money will go toward a number of efforts including the development of a bait bike program and ongoing public outreach and education programs. Morrow and Hellem said the PWTC plans to make this donation an annual tradition.

The Bike Theft Task Force was launched last March and has been crucial in raising the awareness of bike theft in the police bureau and the community at large. Last summer Officers Sanders and Bryant attended several major events where they worked closely with Task Force members J. Allard of Project 529, Bryan Hance of Bike Index and volunteers to register hundreds of bikes. The officers say they’ve made twice the amount of recoveries thanks to internal training and education efforts and a flood of tips coming in from the public via email and the @PPBBikeTheft Twitter account.

Officers Sanders and Bryant have also recently hired a college intern to help add capacity to their efforts.

The Task Force, which also includes myself and a staff member from the Portland Bureau of Transportation, had been meeting regularly until last fall. Now we’re regrouping and planning the second annual Portland Bike Theft Summit which will take place in April. Stay tuned for more as we confirm our 2016 plan of attack.

They have voted numerous times on changing the name and it never passed. They pretty much refer to themselves as PWTC anyway.

Yeah, I know. I was being a bit facetious. 😉

Gender-neutral names are better, but hopefully most people know that the title is an homage to the “wheelmen” clubs of the late 1800’s and not a group meant to exclude women. Their website could perhaps make this a bit clearer.

I’ve been a member of the PWTC on and off again. By the look of things, some of us may have been riding in the 1800s. The last time we dropped off the rolls, my wife and I just had to admit that we couldn’t keep up with the old codgers.

Funny,.but it seems those quickist to jump on the bandwagon of criritique, might be cis identified males? Whoda’ thought?

I’m trying to figure out what your point is.

If you think too hard, your brain will fry. Give up.

The prefer to be called “Wheelpeople”.

Just be certain that you “correct” all the references to man and men to gender neutral terms.

As you bike to work, be careful that you don’t crash on a slippery personhole cover on your way to your job at a personufacturing plant.

Not my problem, I’m in personagement, I have people for that

We could get some helpful information from a good bait bike program. It would be interesting to let a bait bike float around for awhile after it gets stolen and follow the chain back a few steps beyond the initial theft. Where does the thief take it? After it gets chopped up and repainted, where does it go from there?

That’s the idea Rebecca. Thanks for the questions and input.

Between the Officers and J Allard and Bryan Hance we’ve got a very impressive amount of smarts about how to do a bait bike program. What’s missing is the money and the time to put it all together. Since this will be a PPB thing, there are a lot of things that have to be ironed out before just putting a bike out on the street and watching what happens. Hoping we can share details of the program at the upcoming Bike Theft Summit.

I’m a female member of the PWTC and happy to report there’s no discrimination in this group. They are a super nice and welcoming group. Every member is encouraged to lead rides and hold office. Actions speak louder than words.

This is such a great group of riders — I’ve met and worked with a lot of the PWTC crew over the years including the Pioneer Century the past few years- This is such great news!

Vancouver BC published videos from their bait car program. They were pretty entertaining and did a great job of spreading the word about the program which further discouraged car thefts. It is harder to hide cameras and mics on a bike, but some recording that could be posted could help spread the word about thieves and this great program!

Well done Wheelmen! It’s an honor to ride with such a community minded bicycle club

I’d rather use community resources to penalize and stop dangerous, violent driving than baiting and imprisoning nonviolent thieves.

The Will Attempt To Return Your Property Task Force got 4k?? Leave your locks at home people. This problem is fixed.

Thanks for joining in. You’re a genius!

Great female cyclist in this club too! I like that the money we raise goes to worthy causes! Love PWTC!