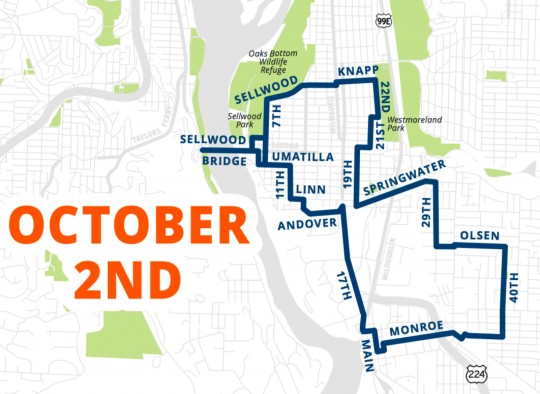 With lots of grey skies and another big rainstorm on the way, here’s an event to look forward to this summer: eight miles of (relatively) carfree streets from Southeast Portland to Milwaukie via the new Sellwood Bridge.


That’s one of the five routes the City of Portland has just announced for their 2016 Sunday Parkways season. Now in its ninth year, Sunday Parkways has earned a rightful place among Portland’s many cherished annual outdoor events. Last year’s attendance set a record with an estimated 119,000 people taking part.

You don’t have to wait until October to ride the new Sellwood Bridge. Multnomah County is set to open it to traffic on March 1st (don’t miss the big celebrations of the old and new bridges on February 25th and 27th respectively).

The Milwaukie route will also include crossings of bridges on the Springwater Corridor over McLoughlin (99E) and will feature activity areas at Westmoreland Park and Sellwood Park. For some Milwaukie residents, the event will be the perfect opportunity to raise awareness for the Monroe Neighborhood Street Design Plan. Monroe connects downtown Milwaukie with new Orange Line MAX light rail, northwest Clackamas County and the Clackamas Town Center. Bike Milwaukie, a local bike advocacy group (along with help from the Bicycle Transportation Alliance) recently pushed through a neighborhood greenway plan for inner parts of Monroe Street.

This will be the second year in a row that the City used Sunday Parkways to help introduce the community to a new bridge over the Willamette River. Last year’s marquee event featured the brand new Tilikum Crossing Bridge.

And the west side isn’t part of Portland again but Milwaukie is? Please boycott this event until some love is shown for the west side. I thought we were one city. Five events on the east side is ridiculous.

Boycotting the event until it’s possible to do one on the west side is just plan silly. They tried to operate one on the westside and it was a logistical nightmare.

I’m sorry that you have poor facilities on the west side. Did you know that when you located there? Twenty five years ago, I looked for housing all over the metro area and bought a house in a location where I could reasonably bike to work in downtown. It’s not as if it wasn’t obvious that the west side would be challenging.

Operating Sunday Parkways where it can be effective, safe, and successful benefits all of us because it shows what can be done with good infrastructure. If it proves popular and successful, it can be expanded.

As my grandmother would say “You’re cutting off your nose to spite your face.”

So people pay taxes on the other side of the river do not deserve a Sunday Parkways on SW Terwiliger Blvd?

Interesting how they can do so many runs on the west side without any problems. Closing off lanes on Barbur and Terwilliger would totally be possible since they do it for many other events.

Also we have “poor facilities” on the west side since most of the budget for cycling infrastructure has been spent on the east side. The west side has been milked for years to build up the inner east side part of town.

Maybe we should do a downtown Sunday Parkways, then?

Downtown is the west side. So is NW and the Pearl. There are options, don’t let the city give you the excuse the hills or a lack of available streets is the reason they have to do it on the east side. That’s garbage and a real lack of them wanting to do some work to figure something out.

I know downtown is the west side, that’s why I suggested it. 😉

Sunday Parkways Downtown, Pearl, or NW would be great, since it would bring in a lot of residents from the densest neighborhoods in the city. It would also be more visible to people who for some reason haven’t heard of Sunday Parkways yet.

They did a SW/Pearl Sunday Parkways a few years back. Not sure why it didn’t stick though.

I participated in the Pearl one. Cars were ignoring the signs and driving the bike route. It was stressful cycling for sure.

If cars were ignoring the signs, then that’s the sign of a poorly planned event.

It sounds like you should volunteer, then. The more volunteers enforcing the rules, the fewer law breakers.

Chris I
Reply to  David

I’ve done the SW Sunday Parkways. The hills were a major barrier for families, and turnout wasn’t great. Doesn’t SW have 4/5 city councilors? You’d think that you guys would have some pull in city hall to get what you want…

Eric Leifsdad
Reply to  Chris I

The hills are a challenge, but not nearly as bad as the traffic. See also electric bikes. But seriously, how many parents were whining more than their kids? If turnout was remotely proportional to mode-share here vs the east side, one Sunday per year would be worth it.

Riding a bike to downtown from the westside is unreasonable?

Downtown is the west side and none of the Sunday Parkways are downtown.

Awesome! I’ll be in Portland for a couple weeks of October. Not sure if I’ll be there on the 2nd, but will ride it if I can.

Jonathan, the link you’ve posted is for Clackamas County’s portion of the Greenway.

It’s a shame there is no Sunday Parkways in NW or SW Portland this year. But to make it work, PBOT would need to be willing to open a major street to people walking and biking. A relatively flat route like Barbur/Hwy 99 would work well, but it is quite different from Sunday Parkway’s current routes. But using a major arterial or highway would be much more like the original Cicolvia in Bogota, and similar events in other cities.
I also believe a downtown/NW event would work, but it would require using some busy streets and getting plenty of volunteers and police to protect the route.

Multnomah Blvd, Bertha, Macadam/Moody/Bond in South Waterfront are all totally flat, even Terwilliger isn’t too steep.

Not if you live on the west side. Which is someone ironic since Novick lives in Multnomah. However I will admit that I have never seen him on a bike.