Crossing the Broadway Bridge during construction 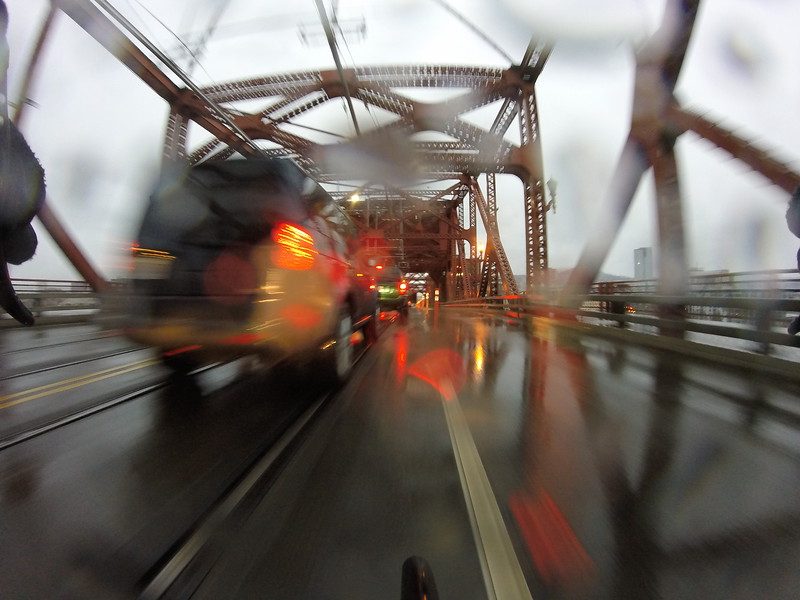 There is only one (of two) pedestrian paths open across the Broadway bridge right now. They have pinch points that were being flagged for safety and perhaps efficiency, but they seem to have given up on flagging.

I’ve used other options when possible, but twice this week I was riding on routes that virtually force me to use Broadway to head into the Pearl or NW District.

So, here’s my solution. Some may already do this, same may choose to take (at least) 3 signal-controlled crosswalks to get there they want to be. I won’t.

Generally speaking, there’s enough room to the right of the streetcar tracks. And it’s not like bike lanes are foolproof either- this happened as I was descending on the Lovejoy ramp.

This is well within my personal risk tolerance, but I have never found it expeditious. I have taken enough swigs of that same sour milk, but to each their own.

The Steel Bridge upper deck, on the other hand…

Good work! I had the displeasure of navigating the “official” route this weekend — what a disaster. Glad to see somebody is pushing the envelope on this bridge.

The biggest problem with riding the lane is that it’s only useful when there’s not too much traffic, otherwise it is actually faster (and also unpleasant) to take all those crosswalks and go the wrong way on the path. Any user should be aware that those street car tracks are dangerous, even if you minimize their crossing. Whenever I go that way I can just feel my shoulder dislocating in anticipation of a fall.. Ugly memories. To each their own, but I’m using the steel, at least for westbound crossing, no matter the inconvenience, until this construction is done.