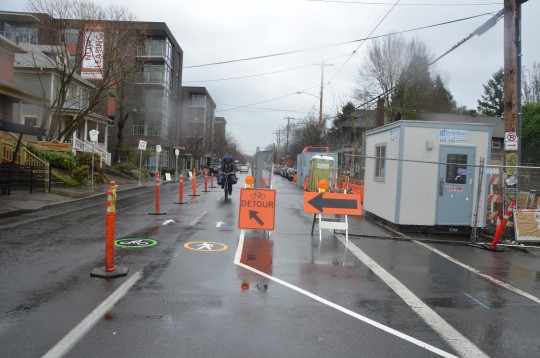 A contractor’s trailer blocked sidewalk and bike lane, so the city temporarily removed some parking to keep the routes open.
(Photos: Michael Andersen/BikePortland)

Three months ago, there were so many construction zones encroaching on walking and biking routes that a few Portlanders organized a walking tour of downtown’s worst offenders. So today we’re happy to take a moment to recognize a detour that the city has handled beautifully.

It’s at SE 21st and Belmont, where a big new apartment building is going up. Like on many of these projects, contractors have set up a fenced-in trailer along the sidewalk and curbside — in this case right in the path of the bike lane that runs up Belmont at this point.

But unlike on many projects, the city has worked with contractors to create a great detour for people walking and biking through this commercial district. A detour sign prompts people to the left, into one of the two parallel auto travel lanes: 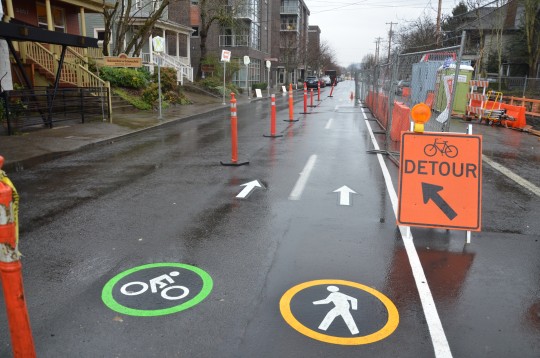 The resulting design pushes cars fairly close to the left (north) side of Belmont, so the city temporarily removed a handful of parking spaces to ensure that wide auto traffic can keep flowing.

The design cleverly uses what would usually be the dashed line between two auto lanes to become the line between people walking and biking. At the east side of the detour, the city has added a new temporary stripe to guide people back into their usual lanes: 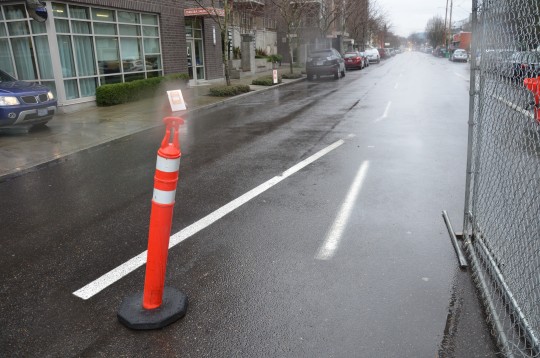 Here’s the view from the other direction, looking west: 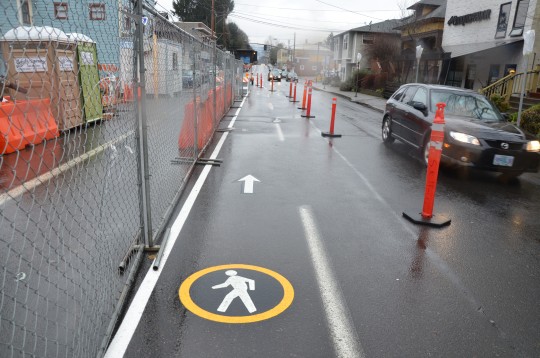 You can see that (despite the man in the first photo on this post) the bike lane is eastbound as usual while the temporary walking lane is bidirectional, just like the sidewalk.

It’s great that the city is working to address these issues. City spokesman John Brady said Wednesday that this is a Bureau of Transportation joint.

One big reason different detours are so different in how they treat people using nearby streets is that different detours are designed by different city bureaus, and there’s no overarching citywide policy that has ever gotten every bureau to design its detours with care. With our neighbors in Seattle celebrating a new policy that specifies the rules for closing sidewalks in construction zones, we can hope and expect that this is a sign that Portland’s internal efforts are improving, too.

Is the cyclist in the top picture going the wrong way in the pedestrian lane?

There is no such thing as wrong-way sidewalk biking. True, there are problems with sidewalk biking and even written rules against it on some sidewalks, but it’s also a good indicator of what’s wrong with your design and/or systems. This layout is pretty good, but wow that’s a big car lane. And did anybody think to ask: why are these people in cars driving on this street anyway when there’s an expressway less than a mile away? Why do we spend all this money on special roads just for cars if drivers aren’t even going to use them?

Salmon are drawn by the inexorable pull of protected bike lanes. Respect those desire lines, yo.

>Respect those desire lines, yo.

It’s legit if he was bicycling on the sidewalk. That’s allowed, and in many cases (people who like to ride slowly) it’s the best choice. This pedestrian lane is replacing the sidewalk.

That’s the sort of solution that doesn’t scale well. If you have a lot of pedestrians, a lot of cyclists, or a lot of both it produces too much conflict.

Sometimes in a crowded place (downtown) you can’t accommodate every activity. If you are only moving at 2 mph why not just walk your bike? And if accommodating 2-5 mph cycling is so important, then make a space for it that isn’t on the sidewalk, even if that interferes with faster cyclists and drivers getting to go as fast as they want.

Is that you Amanda Fritz?

1. There are no pedestrians anywhere to be seen.
2. This is not down town.

Decided to stick around after all, soren? 🙂
I don’t blame you. It’s fun around here.

lop,
In downtown Portland, CBD, it is against the law to ride on the sidewalk per city ordinance.

Ah dan, you’ve touched upon one of the many wonders that are contained within the Oregon Revised Statuates: Bicycles can be either pedestrians or vehicles.

YES! This is how it should be done. Bravo to PBOT and the contractors involved in making this happen. Thank you.

And props to Oregon Walks & The BTA for working with the city to help make this type of ped/bike detour treatment the standard.

Great job, PBOT! This needs to be standard practice for all construction detours.

Shouldn’t be as much of a delightful surprise as it was when I encountered it last week. I was so impressed that I tweeted about it myself!

I regularly patronize one of the businesses whose on-street parking has been temporarily eliminated (the Ad Astra hair salon), and it didn’t seem to be causing them any angst.

The car traffic zooming by, RIGHT THERE, practically on the north sidewalk was a bit thrilling as I unlocked my bike and made for the temp bike lane.

Not directly related to this welcome construction detour, but to user-friendly cities in general: there’s a lot to be said for some kind of buffer – be it parked cars or a protected bike lane – between the sidewalk and fast-moving motor vehicles.

“City spokesman John Brady said Wednesday that this is a Bureau of Transportation joint.”

It seems you’ve captured a wild salmon in its natural habitat.

Wow! The City planners who shut down the sidewalk on NW Glisan outside the new construction project at the Nob Hill YHA (Youth Hostel) could stand to borrow a few pages from this book!

Walking with zero pedestrian buffer with 35mph is terrifying (or rather, running, so you can get to the other side of the construction zone before the next onslaught of cars bear down on you when the traffic light turns green).

Can’t you cross to the other side of Glisan and use the sidewalk?

Can’t people driving just go a block over to Division instead of driving down Clinton?

(Though it would be nice to have a reflective barrel or other type of larger barricade at the start and end of these transition zones…just in case a car strike were to take down the first wand and to make it more visible to approaching motorists…plus drivers tend to only respect larger objects…they will purposely not be concerned at running over cones and wands).

There’s actually a big digital sign at the very start, not pictured here.

Thanks for the update…a digital sign should keep most drivers from driving over it. 😉

A frequently forgotten point with city staff, contractors and etc. would be that a well designed work zone – one that adds a ped and bike lane – often adds a wider safety zone/ buffer between the construction workers (or open trench) and the passing motorists.

This opportunity often seems lost on those designing TCPs or reviewing them especially in light of the 2009 MUTCD guidance on work zones (Section 6A.01):

“The primary function of TTC is to provide for the reasonably safe and effective movement of road users through or around TTC zones while reasonably protecting road users, workers, responders to traffic incidents, and equipment.”

“Of equal importance to the public traveling through the TTC zone is the safety of workers performing the many varied tasks within the work space. TTC zones present constantly changing conditions that are unexpected by the road user. This creates an even higher degree of vulnerability for the workers and incident management responders on or near the roadway (see Section 6D.03).”

I just rode through it. Unfortunately, the pylons have been pushed over eliminating the bike lane and only leaving the pedestrian lane.

That’s pretty much what I expected. Time to move to version 2.0.

An elevated site office (and portables) would have reduced the road space taken up by the construction site.

Beautiful! Thanks to PBOT and everybody else involved.

What is wrong with jersey barriers?

Voice from the future : if only someone would have invented jersey barriers prior to 2016.

Other voice from the future : yes, if only humans understood that a flimsy plastic code will do little to protect humans from a wandering human empowered with a 3000 lb missile.

Will we ever learn?

I can think of at least a dozen places where I would prefer a flimsy plastic wand to the paint and air which currently protects me from drivers who are not choking on soda. The psychological effect is significant. Given the cost difference and ease of deployment vs jersey barriers, the only thing stopping us from throwing a net of green plastic bollards and/or water-filled barriers over the city next week is that “we just don’t want to”.

As someone who rides this route home most days I really appreciate this effort! My only note is that I wish the pylons would stay up or that they were larger. I’ve been through it a few times now where five or more pylons are littering both lanes. Still…thank you!