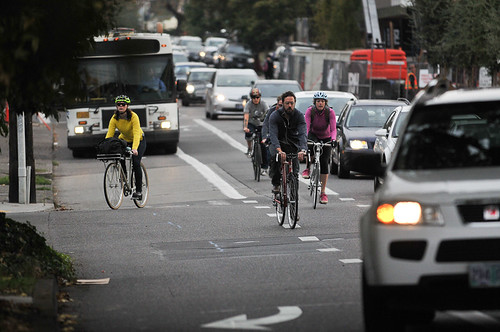 This guest article was written by Cynthia Newton as part of our ongoing paid partnership with Portland law firm Swanson, Thomas, Coon & Newton.

Senate Bill 411, passed by Oregon’s legislature in 2015, will help Oregonians injured in vehicular collisions by expanding benefits under two sections of their automobile policies: Personal Injury Protection (PIP) and Underinsured Motorist (UIM) coverage. The law goes into effect on January 1, 2016, and applies to policies issued or renewed on or after that date. In this article I’ll share more information about those two types of insurance, how the new law impacts them, and why this is important for people who drive, walk or bike.

Few are aware that after a collision an injured person’s automobile insurance pays medical bills first — before health insurance and before the at-fault driver’s auto insurance. The injured party’s own Personal Injury Protection (PIP) coverage pays these bills. Senate bill 411 changes PIP coverage in two important ways. First, the payment period is increased. Under current law, PIP coverage pays for bills incurred during the first year after the collision. Under SB 411, PIP will pay for bills incurred during the first two years after the collision–a full year longer. The most common amount of PIP coverage is $15,000, the minimum required by Oregon law, but it is possible to buy more coverage.

The following example shows the important difference stacking makes: An injured cyclist with $50,000 UIM coverage is hit by a driver who runs a stop sign. The cyclist’s injury claim is valued at $75,000. The driver’s BI limits are $25,000. The cyclist settles her claim against the driver for the full $25,000 of the BI limits and makes a UIM claim seeking the remaining $50,000.

SB 411 applies only to policies written or renewed after January 1, 2016. All Oregonians should contact their insurance agents right after the new year to renew their automobile policies to obtain these additional benefits.

Trial attorney Cynthia Newton has represented hundreds of cyclists, pedestrians and motorists injured or killed in vehicular collisions. She is licensed in Oregon, Washington and California and is a partner in the firm Swanson, Thomas, Coon & Newton.

Browse our Get Legal story archives to learn more about Oregon laws.

Watch out for these “better deals.” They’ll lowball you to get your business then up the premium on first renewal. If you have a good insurance company better to negotiate a lower premium with them.

Thanks for this info! My insurance agent recommended that I choose the minimums and take out an Umbrella Policy, though, so I wonder how this will affect that “stacking.” Sounds like I need to call her with some questions…

Be careful of this course of action. Many of the umbrella policies out there actually require underlying limits of coverage greater than the minimum limits. Even then, be sure to read the policy language as most umbrellas are “following form”, in that they only cover something (at much higher limits) if the underlying policy covers it.

I would definitely call your agent. Like PomPilot says, usually you have to max out your auto insurance liability (or come close) to qualify for an umbrella and even then most umbrella policies don’t cover UIM (the ones that do are the exception not the rule.)

And for those without car insurance policies because of no car..?

Yes, please. These policies and the laws related to them are disturbingly car-centric, and seem to say that no non-driver could possibly be injured on the streets and roads.

Bc
Reply to  LC

I’ve been car free for six years and recently need to drive a rental during a business trip. Lacking auto insurance, I asked my insurer what coverage I needed and was told that my renters insurance would cover legal minimum liability. I know that policies will vary, but do I need any other insurance (besides health insurance,of course) besides that for my car free lifestyle?

Dead Salmon
Reply to  Bc

Unless you’ve got your renters policy in your hands and have read that part about providing liability in a car accident I would not rely on that. Sounds flaky. NEVER depend on verbal direction on something like this – get it in writing.

While these changes are welcome, what we really need is a pool of money funded by a fee on auto insurance policies that “covers” cyclists injured in hit-and-run collisions, sort of a crime victim compensation fund. As it stands, a car-free person is totally on the hook for all the bills (although hopefully everyone has health insurance). Isn’t Oregon supposedly trying to encourage people to minimize or even eliminate driving in their lives?

LC
And for those without car insurance policies because of no car..?Recommended 0

It has been several years since I was in the insurance business. However, there were several carriers who offered ‘Non-Owners’ coverage. This was designed for the licensed driver who did not own a car but drove a rental car or a vehicle provided for their use.

From my research none of the big insurers sell these policies any more, which is really unfortunate.

B. Carfree
Reply to  Charley Gee

I have the next best thing. I own a small pick-up that would need at least a day’s work to be made operable. I store it on private property, so I don’t need to register it. My auto insurance on it is a comprehensive only policy that costs me $15/yr but gets me a discount of $75/yr on my homeowners policy. On the rare occasions when I rent a motor vehicle, my agent “turns on” the rest of my auto policy for $1.50/day and I’m good to go.

I still need to find out just how much of that pick-up I need to have in order for it to qualify. Maybe I can get down to just the driver’s side door or something.

Charley Gee
Reply to  B. Carfree

That’s amazing. What company do you use?

It’s unfortunate that the uninsured motorist coverage of your auto insurance will only pay out if you are injured while in a motor vehicle.

I asked my insurer (USAA) and also the Senior Policy Analyst of the State of Oregon, and the answer was the same. I would love to see policy reform that allowed that coverage to be paid out even if injured while operating a bicycle, which is legally a vehicle, or if injured as a pedestrian. That $15,000 PIP coverage will be used up quickly in any serious collision involving a vulnerable road user.

That’s not my understanding. I was concerned about that when I was renewing my policy and raising the level of my coverage, so I asked very specific questions about coverage while injured as a pedestrian or cyclist. The PIP comes into play, but not the UIM.

“The short answer to your question is that Oregon law does not require uninsured motorist and underinsured motorist (UM/UIM) benefits to be paid unless you are injured while occupying a motor vehicle as defined in ORS 742.500.” — Gail Gage, Senior Policy Analyst, Insurance Division, State of Oregon.

Wow. That’s not what 742.500 saya at all: shall be legally entitled to recover as damages for bodily injury or death caused by accident and arising out of the ownership, maintenance or use of an uninsured motor vehicle.

I have to disagree with the policy analyst and would very interested to see the original email in which she said that. UIM benefits cover pedestrians. We represent pedestrians in UIM actions all of the time.

Also a bicyclist is considered a pedestrian under the UM/UIM laws. A pedestrian is defined as any person not in a motor vehicle. So a person walking or riding a bicycle or sitting in their living room when a car drives through the wall are all considered pedestrians.

My question about the additional coverage due to the new law is “How much will premiums go up due to this change?”

“Mark: It’s unfortunate that the uninsured motorist coverage of your auto insurance will only pay out if you are injured while in a motor vehicle.”

I don’t know if that would count.

There are a surprising number of bike-riders in Portland who not only don’t have cars, but also don’t have drivers’ licenses. What happens to them if they’re injured in a collision?

Now I understand why my rates went up. Thanks. And thanks, Obama.

Random auto insurance policy question:
What would the required minimum limits look like over time adjusted for inflation?

I came across a paper indicating the per person limit in 1945 was $5,000. Trending that for just cpi inflation would put it at $65K today, considerably higher than the $25K minimum in force. What would that look like taking medical inflation into account?