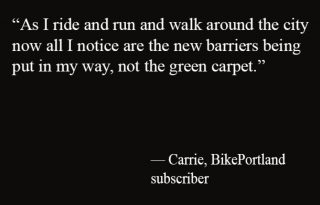 Almost three years ago I moved to Portland from Honolulu, HI. For a place with great riding weather year round, the best bike infrastructure on the island was the equivalent of the bike lanes on SE 26th Ave. The amazing thing to me about Portland is what happens when you treat non-vehicular methods as equal modes of transportation. Suddenly there is space to ride and infrastructure that doesn’t treat you as a 2nd class user of the roadway. And there are so many more people, of all ages, not driving (or being driven around) in cars. Community is back because we’re actually interacting with people, not machines.

But where are the planners and visionaries who put that infrastructure in place now? Those who thought of green bike lanes and removing parking and signals just for cyclists and walkers and having direct routes to major commercial areas, not roundabout “don’t get in the car” ways of getting to-and-fro. As I ride and run and walk around the city now all I notice are the new barriers being put in my way, not the green carpet.


Physical barriers on the bike/pedestrian infrastructure (Trimet swing-gates). Routing barriers that force me to go 3 blocks left and then 2 blocks north to get one block east. Access barriers that have myself and my teenager “sharing the road” with semi-trucks to get to school and work. And now even infrastructure removal of the miniscule sliver of traffic calming where my daughter and her peers spend their days. Even bike infrastructure advocates have put barriers in my way (cones in the bike lane @PBOTrans), though those weren’t on purpose.

I don’t want to be one of the brave and fearless. I just want to ride my bike, because it’s FUN and it brings me joy. At least in Honolulu I didn’t expect anything. I’m increasingly frustrated with all of the barriers that this Platinum cycling city is putting in my way, because I saw the vision of how it could be.

yes, it’s sad how we get our hopes up for a glimmer of support outside of a car only to have them dashed by the usual excuses that those “other” cities use…

Don’t forget all the barriers caused by closed sidewalks in just about every part of town due to construction. This, I believe, truly shows that this city doesn’t really respect you.