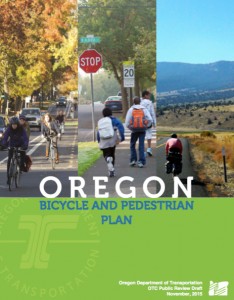 The Oregon Department of Transportation has released a draft of their new Bicycle and Pedestrian Plan.

This plan is the result of two and-a-half years of meetings and outreach and it’s the first time ODOT has updated its biking and walking plan since 1995 (an update to their design guide in 2011 notwithstanding). It’s a crucial document because the policies and strategies in this plan will set the framework for what ODOT decides to build going forward.

A coalition of transportation advocates that includes the Bicycle Transportation Alliance, Oregon Walks, the Sustainable Transportation Council, the Oregon chapter of the Safe Routes to School National Partnership, and two members of the plan’s own advisory committee have already penned a letter to ODOT with their concerns about the plan.

We’ll be taking a closer look at the plan in the coming weeks. At first glance it appears to be a solid start, but could use some strenthening in order to make a real impact.

The reason it’s so important for us to get this right is because unlike the existing 1995 plan – which was just a “staff-level” document without the power internally to influence big decisions, this new plan is what ODOT refers to as a “modal plan.” That’s an important distinction. According to ODOT, this plan will be “equal in stature” to its Highway Plan, Rail Plan, Freight Plan, and so on. 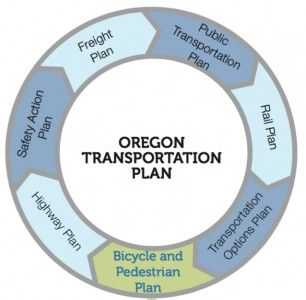 How it fits in among the state’s other modal plans.

That’s why we’re a bit concerned that some of the sections aren’t quite as strong as they should be; like this passage from the Introduction (emphasis mine):

“To ensure safety for all modes, it is important to consider the interaction between them and to strive for a seamless transportation system that minimize conflicts. In some instances, greater separation of walking and biking facilities, design treatments, or technologies may be needed where appropriate, to enhance multimodal safety.“

Plans are notorious for not really mattering when push comes to shove, so it’s extremely important that you start from a position of strength. By stating that separation — which most planners these days consider a minimum standard treatment — is only necessary “in some instances… where appropriate” just sets ODOT up for falling short of their goals. (And does anyone really know (or care) what “enhance multimodal safety” means?)

We are glad to see that a coalition of transportation advocates are already on this case. In a letter (PDF) with their feedback on the plan, they’ve urged ODOT to use stronger and clearer language when it comes to safety. “Equivocation in the language throughout the plan’s policies and strategies,” they write, “dramatically undermines its intent.”

Here’s more from the coalition:

“Creating safe streets for people walking and biking requires narrower travel lanes, slower vehicle speeds, more physical protection, more sidewalks and bike lanes, and savvy and comprehensive public education. Nowhere in the plan language is this direct and well-understood approach to safety made into policy. This omission will not serve Oregonians of all ages walking and biking now or in the future.”

In terms of the future, ODOT has created this vision statement, which they hope to achieve by 2040:

And to get there, ODOT estimates they’ll need over one billion dollars:

Note that the total amount ODOT needs for bikeways is less than what was wasted was spent planning the failed Columbia River Crossing project.

There are some good intentions in the plan, but if ODOT wants to achieve that vision there needs to be more specificity, accountability and commitment.

For instance, I was happy to see that ODOT has included the concepts of Bicycle Level of Traffic Stress and Multimodal Level of Service — two methodologies of prioritizing projects that go beyond simply taking into account how much delay someone in a car would experience (the dreaded Level of Service standard that’s currently used by default). But while these concepts are included the plan, ODOT stops short of endorsing them or making a commitment to actually use them.

And there are no specific projects in this plan. ODOT says that’s by design, and that project lists will be decided later with the plan acting as a guide. But if this plan is to have any teeth, some commitments to specific routes and projects need to be put down on paper.

One encouraging item in the plan is Goal 4: Community and Economic Vitality. It’s good to see the state solidify its focus on how bicycling and walking can be tools to create tourism revenue and build community in both urban and rural areas.

You can view the entire plan at Oregon.gov. To share your feedback directly with ODOT, email them through February 18th at ORBikePedPlan@odot.state.or.us. Stay tuned for an online open house hosted by ODOT in mid-December.

Thanks for covering this topic.

As for the BP quote:
“Note that the total amount ODOT needs for bikeways is less than what was wasted planning the failed Columbia River Crossing project.”

I agree it was a “failure” but as for “wasted planning” much of the staff level design work could be dusted off due to the completion of the FEIS (I believe) and reused in the near future.

This could be for PLUS and MINUS…depending on your modal and political viewpoint:

PLUS:
– regional north south bike connections and design were discussed at detail (vs. the forgotten district that far north Portland north of Kenton used to be at the City level);
– the trafic congestion and safety deficiencies of the bridge were well documented, with the intent to support more lanes (but there is some local movement now to push for 1 fewer lane to allow for breakdown lane / shoulder to be added on the bridge); and etc.

PLUS OR MINUS:
– there is a WSDoT / CoV/ State Legislature push (and funding) to use the CRC design work to reconstruct the I-5 / Mill Plain interchange as a SPUI. [Freight and car drivers like it. But for bikes and peds this would likely be a big negative due to SPUI layout and now given all the lost network enhancements that the CRC was offering.]

MINUS:
– its been discussed a lot already…

in addition to that, all the geotechnical work remains valid

Can anyone explain what the graphic of “how this fits in with other plans” means?

That this plan leads to the Highway Plan? And the freight plan leads to the public transit plan? Or is it just the order in which they are updated? Because the OHP is updated a lot more frequently than the Bike/Ped plan.

It’s a really confusing graphic. Which signifies, in a nutshell, the mess of the Plan’s inability to make clear decisions and set real priorities.

And it’s just another plan where ODOT says “the real stuff comes later.”

That graphic is showing that the Bike & Ped Plan is (supposed to be) on the same level in terms of institutional respect as those other plans. Prior to this plan, the Bike/Ped Plan was not on equal footing to these other modes. All these modal plans feed into the Oregon Transportation Plan.

Thanks to all who sent and signed the letter.
I’ll personally email ODOT again, and look forward to hearing more about the online open house in December. Thanks.

I’m delighted the bike plan has risen to a higher status with respect to the highway and other plans, but from the quotes you pulled, Jonathan, the language definitely doesn’t reflect a decisive turnabout. It’s more of a “the jury’s still out” sort of language than a call to action. And a call to action is what we need to turn the ship of statewide transportation infrastructure around.

Besides emailing comments before February 18th, do folks have any additional suggestions for pushing for stronger language in this plan?

They Actually mention skateboards! This is a huge improvement!

The only failure is the people that fought it tooth and nail, dragged out the process, created the cost overruns, only to flush it down the toilet.

Florida just started a statewide effort to close the gaps in their trail network. A big key is in Miami, where plans call for a 10-mile-long corridor beneath the elevated Metrorail transit line to be converted into a linear park featuring a segment of the East Coast Greenway Trail. Oregon should be thinking in similiar terns. How do we close the gap in the Willanette Valley Trail between Chanpoeg and Oregon City/Portland, for example? Or link Tilkicum Crossing with points west? Or how do we create an east-west route from Portlabnd to Idaho and points east? It’s a start.

I have to agree with the quote that was pulled out regarding separation. It really isn’t necessary, or even a good thing, in all places. I hope ODOT never adopts separation as a primary goal. In my experience (extensive after 580,000 miles in the saddle) most implementations of separation are both slower and more dangerous, although as the old off-color joke goes, they look good in the shower.

Since I can foresee the day coming, this opening statement caught my eye: “Aging individuals who are not able to drive must still have access to medical services, daily amenities, and social activities either by walking or public transportation. Walking and biking are essential modes needed to serve different generations’ interests and the needs of all Oregonians.”

PS: Having just recently walked along NE Columbia, NE 82nd and NE Sandy, at night, I can see some demonstration projects close to home. In the case of NE Sandy, that would be to fix what wasn’t addressed a couple of years ago.