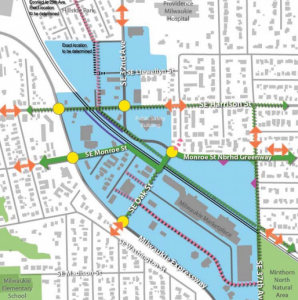 One year after Milwaukie voters elected two vocally bike-friendly politicians to their city council, Milwaukie is lining up some significant investments.

The biggest new one in the works, a crosstown neighborhood greenway on Monroe Street, will get its first public meeting at city council on Nov. 3.

“We have consensus on council to make this a top priority,” Milwaukie City Councilor Karin Power said in an interview Wednesday about the city’s work on an “all-inclusive bike-, pedestrian- and street-safety program.”

Milwaukie doesn’t have a citizen biking or pedestrian advisory committee. But public support for biking and walking improvements has led to something interesting: the city’s public safety committee has broadened its focus and is now taking a lead role on infrastructure planning.

“I think safe streets are safe streets, and that means a lot of things to a lot of different people,” said Power, who came to office last year with strong support from biking supporters, among others. “A lot more of our residents want not just safe streets from a crime perspective but also safe streets with a how-people-are-using-them perspective.” 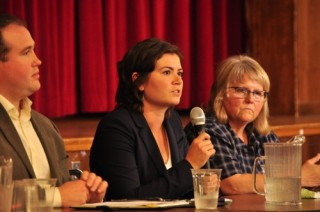 One of Milwaukie’s biggest challenges, Power said, is State Highway 224, which runs just east of its downtown.

“From my perspective, facilitating a way for people to get across our biggest highways is mission critical,” she said. “ODOT is at the table on that, so that’s helpful for us. I think they’ve recognized that as Milwaukie evolves and is attracting new people and new businesses, we need to knit our neighborhoods together across that highway. It very clearly bifurcates our city, and we have economic areas on both sides.”

“This isn’t just about bikes. It’s about getting kids a way to walk to school, bike to school, get physically active in a safe way. I think that’s part of what’s unified the community on this.”
— City Councilor Karin Power

To that end, the planned Monroe Neighborhood Greenway would include $40,000 for a “diverter, semi-diverter and median refuge islands.”

The Monroe plan isn’t funded yet. That’ll be the next job if Milwaukie’s council approves it.

“This isn’t just about bikes,” Power added. “It’s about getting kids a way to walk to school, bike to school, get physically active in a safe way. I think that’s part of what’s unified the community on this.”

All in all, it’s a huge turnaround from a few years ago ago, when the proposed Orange Line was sometimes derided in Milwaukie as a “crime train” that would cart hoodlums into town.

In her official pitch to voters last year, new Milwaukie City Councilor Lisa Batey described further investments near the Orange Line as the city’s best bet for growing its tax base and eventually funding amenities elsewhere in town. In August, The Oregonian reported that real estate values in Milwaukie were “blowing up” with the opening of the Orange Line.

Power credited the recreational and advocacy group Bike Milwaukie for building popular support for better biking and walking, as well as a “super vocal” network of “moms” at “a number of elementary schools.”

That’s all helped add up to political change, she said.

“With Lisa Batey and I being elected last fall, it was a strong message to council,” Power added.

Correction 4:20 pm: An earlier version of this post gave the wrong title for Councilor Lisa Batey.

I lived in Milwaukie for a year recently, and I’d say pretty much every apartment listing within a mile of the light rail line was touting its proximity, even 18 months before the thing opened. There’s not really anything for a criminal to take the train to, unless they need to go to Freddies maybe.

I loved walking in Milwaukie, and took a walk almost every day that year, but there are definitely some sketchy areas with no sidewalks and skinny shoulders once you get out of the area around downtown. Railroad Ave is just crying out for a walking/biking path. And there are a few places that you just can’t safely get to on foot further out on 224. So I’m glad they’re looking at these issues.

What is the progress on the expedited SE 17th ave project?

It should be breaking ground spring/summer 2016 and hopefully complete by fall 2015.

After the CRC died…and our LRT/ World Class Bikeway…I was thinking I would move to west Milwaukie and buy a house a few years back…if only the Vancouver Vortex was not so tight for our family at this point in our lives.

[I enjoyed doing some street design/ traffic calming consulting there 4 years ago and got to know it pre Orange.]

I commuted by bike via Sellwood bridge and 224 for 13 years from 89 to 2002 to Clackamas from Washington Square. I only had a couple of issues with the route. One was when they expanded the right turn to the northbound now expressway. The fog lines always gave plenty of room and the gradual rollers kept the adrenaline pumping for a 25-30 mph average riding through Milwaukie. I was only hit once at the light at Monroe. It damaged the Lincoln Continental more than either me or the bike. Destroyed the hood but did not leave a mark on me or the bike.

What do you want to see for Monroe now?

So very glad that Karin Power was elected instead of that other guy.

Posting about Milwaukie’s biking renaissance without even once mentioning the city’s newly installed mayor, Mark Gamba, who is a fierce Safe Routes to School advocate and bicycling fanatic, is a pretty massive omission, don’t you think? Talk about burying the lede.

Mark served on the Monroe Street Greenway PAC while he was still a city councilman, and has helped shepherd it through the public process. This is a plan that blows most Portland “greenways” out of the water with the level of speed and volume intervention measures.

Please do some more research next time. Milwaukie is doing fantastic things around cycling and more people need to hear about it.

With the exception of the journalistic chastising, I agree that Mr. Gamba is an amazing cycling / livability advocate like Milwaukie has probably never seen before .. and he’s Mayor!!

Journalistic chastising is always welcome, especially when it’s deserved … there’s no question that we don’t cover or know Milwaukie (or lots of areas) as much as we’d like to. Thanks for the information about Gamba.

My interview with Michael stressed that this has been, and will continue to be, a Milwaukie team effort. The first SRTS community meeting was called by our former mayor, Jeremy Ferguson, and the initial surveys on safe route obstacles were all done by Linwood Elementary parents. Current councilor Wilda Parks (up for election this Nov- please vote!) has done a fabulous job chairing the Monroe process PAC, and we are so fortunate to have a strong voice for cycling and multimodal options in Mark. He has been a key part of bike advocacy from the start, including through Bike Milwaukie. The guys behind Bike Milwaukie are community builders and invaluable advocates. As for myself, I am an all season* bike commuter to my day job in downtown Portland as well as the BTA Sept BCC captain at my nonprofit, and went to my first city meeting years back to advocate for greenways. I hope the takeaway is not that I intended to slight anyone by not calling them out specifically, but rather, that the community has together determined that this is a strong need in Milwaukie, and is moving this project forward together.

* except for snow, when the Springwater turns into a skating rink.

Yes. If every kid can bike to school, anyone can bike anywhere.

Is there an irony here where a minority of folks are very anti light rail…but pro bike/human powered folks get elected? Are “normal” people coming around that moving around without a car actually increases area values?

Hmmmmm. One can hope.

There is some amazing leadership in Milwaukie! I sincerely hope that other cities around the area will follow their lead.

These efforts in Milwaukie did not happen overnight. The Monroe Greenway was first put into our Transportation System Plan in 2007 with the help of a small core group of residents including myself, Mark Gamba, Matt Picio and Heather Andrews along with a few others. Only in the last two years or so have we had a City Council willing really to consider projects like Monroe and make them a priority… but if we had not built a group of people who asked the City Council to make these things a priority it would not have happened as fast. I’d say it is a culmination of building support at the grass roots level through activities like Bike Milwaukie and SRTS, and then using that support to get some new folks elected that has moved the dial forward and more people are starting to take notice and get involved.

Anyone can make change happen; it just takes being persistent, clear about what you want, having some patience, and dedicating some time to your effort. Eventually, many hands make light work.

What does the city plan to do with unbuilt, public right-of-way? They are often used as trails.