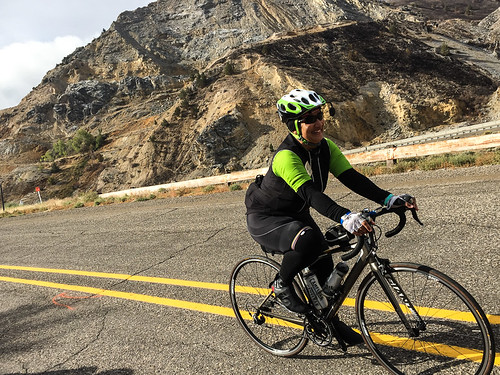 I hope no one complained on today’s ride. Sure, our 50-mile route from Farewell Bend State Park to Baker City had its share of climbing (about 3,000 feet) and a stiff headwind; but it was nothing like what pioneers faced.


In 1852 during the peak of the great pioneer migration, about 10,000 would-be Oregonians made a similar trek up the Burnt River Canyon. It took them six days. Six arduous days over narrow dirt roads cut along sloping hillsides. At a rest stop on today’s ride we learned a bit more about this infamous passage.

According to diaries kept by pioneers, the route from Farewell Bend to Baker City was one of the toughest sections of their entire journey. “Almost impassable” and “The most difficult road we have yet encountered,” were just two of the ways they described it. 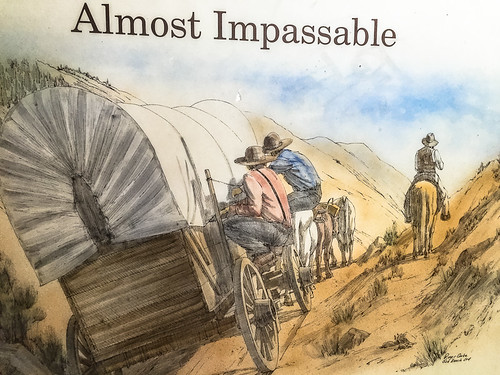 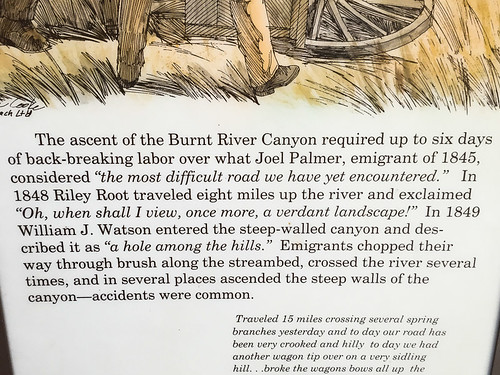 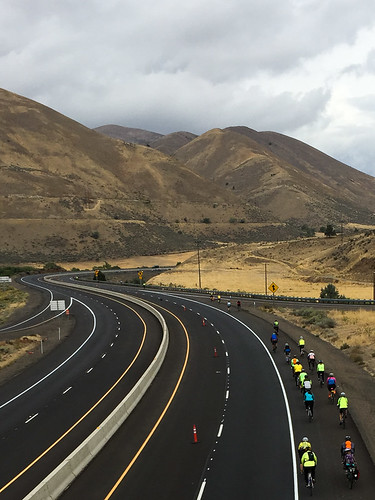 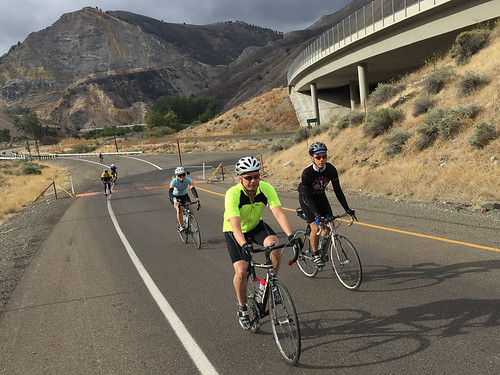 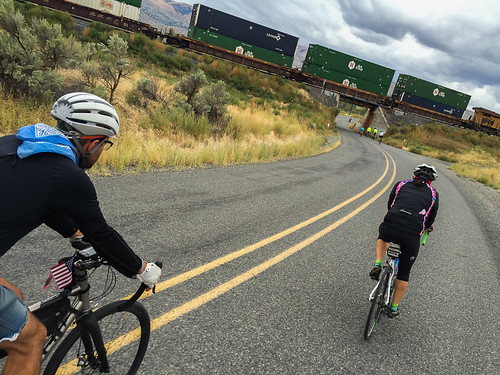 As we rode up the canyon — often on the shoulder of Interstate 84 — I couldn’t help but think what a great project it would be to restore this historic route. Pioneer scholars know where the wagons once rolled and I’m sure many of the roads and trails still exist in some form. The end of the route could be the Oregon Trail Interpretive Center, one of the best museums on the subject anywhere. What better way to honor our past and give Oregonians a perfect way to experience it? (I just so happened to be riding along Oregon State Parks Bicycle Recreation Coordinator Alex Phillips this morning and shared the idea with her. Here’s to hoping it becomes reality someday!).

We also experienced a more modern part of this area’s history today at the old ruins of the Lime cement plant.

With massive deposits of limestone in surrounding hills, the plant was built in 1916 to make concrete for the construction of the Owyhee Dam (among other things). At one time, the Lime plant produced 1.2 million barrels of concrete per year. It was closed for good in 1980 and still sits eerily on the mountainside; a post-apocolyptic assembly of structures now covered in graffiti. 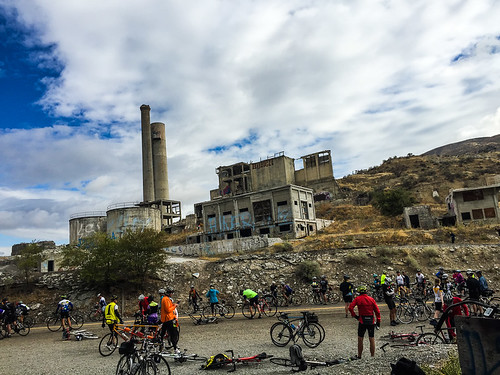 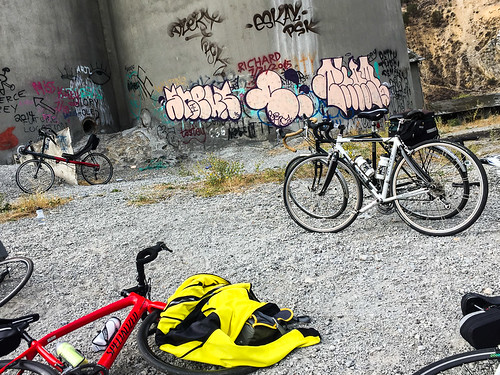 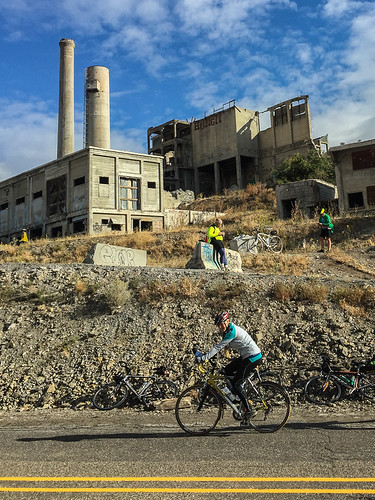 Tonight we settle back into Baker City, the same place we started five days ago. Right now all the bars and restaurants on Main Street are full of Cycle Oregonians doing what they do best — pump money into local economies. 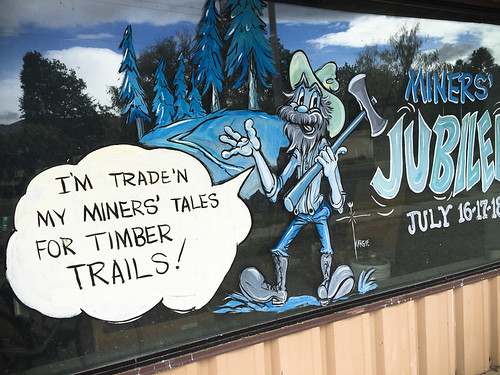 Gold was discovered in Baker City in 1861 and there are still remnants of the rush that followed. 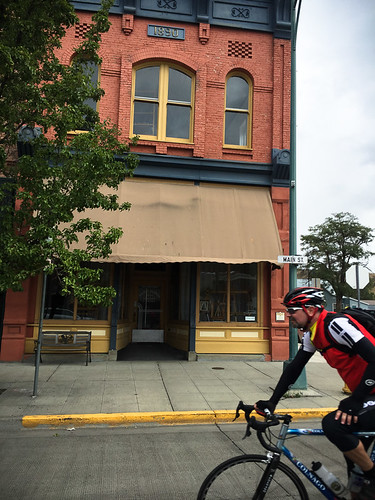 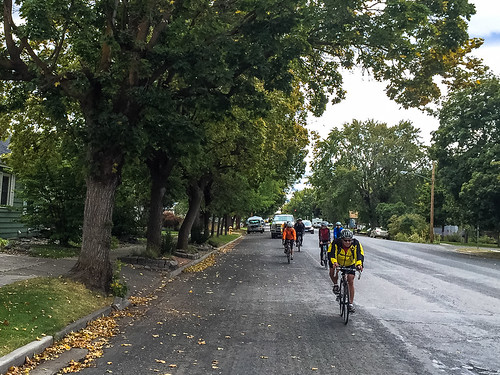 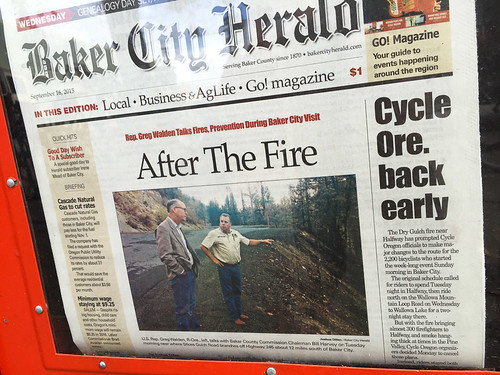 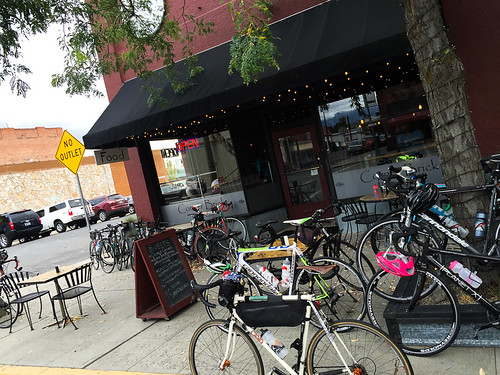 Thanks for following along with my Cycle Oregon coverage. Tomorrow we head north, out onto the eastern side of the Grande Tour Scenic Bikeway. We’ll cruise along Medical Springs Highway and into Catherine Creek State Park on the edge of the Wallowa Whitman National Forest en route to our final night in La Grande.

I like your Oregon Trail re-creation idea. Back in the late 1990’s, the Mormons did a Mormon Trail re-creation wagon ride to celebrate the sesquicentennial of their original crossing to Utah. I briefly considered joining them (my ancestors were part of the original), but the psychological cost of joining a church was a bridge too far for me, even for what looked like a very fun adventure. I went for a nice cycling tour near the Pacific Coast instead.

Looks like people are still taking wagons on the Oregon Trail:
http://www.equitrekking.com/articles/entry/all_american_wagon_train_across_america/

A great book by a woman who with her husband followed the original Oregon Trail from Independence, MO to here: “The Wake of the Prairie Schooner” by Irene Paden. They did it over a number of years in the 1930s and 40s when the actual route was more evident. Its a fun read as well. It was recommended to me years ago by my late friend, Grace Bartlett of Joseph, OR who founded and directed the historical museum there.

It might have been nice of you to buy a copy of the newspaper instead of just photographing it through the window of the vending machine. Doing so would support a local business and help the local economy.

Oh my goodness…. Seriously? Is a week of travel and a multi-part series highlighting the region not enough?

Still no thumbs down otion in these comments??

Book rec: The Oregon Trail – A New American Journey by RInker Buck. It just came out this year and recounts his adventures crossing from Missouri to Oregon on the Trail in a mule-pulled wagon in 2011. It was nothing short of fascinating.

Another good OR Trail read is “The Oregon Trail Revisited.” On my shelf is the silver anniversary edition of ths popular work which was completely rewritten in 1997. Many have driven the back roads which form the remnants of the OT thru the instructions in this book. Well researched, too. Gregory M. Franzwa’s book is a must have for any true OR Trail fan. Should be rewritten for cyclists!

I, too, like the idea of restoring the OT as a bike / ped route. With the likelihood increasing that the Bicentennial Trail (national bike route 76) will be routed across Oregon, that idea should be persued. The Columbia Gorge Sfate Trail might well be part of that corridor, too. So might the Springwater. Worth consideration!