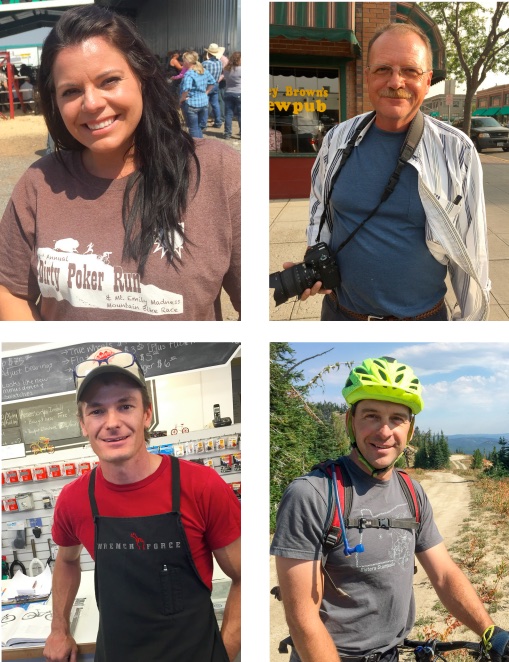 Last month I spent five days taking a closer look at bicycling and bike tourism in Wallowa, Baker, and Union Counties as part of a partnership with Cycle Oregon. Starting in the small town of Halfway on Monday, I rode northeast to circumnavigate the Wallowa Mountains and Eagle Cap Wilderness. I camped, rode rocky dirt roads, did some bushwhacking, sampled singletrack on a mountain bike, rolled on an official State Scenic Bikeway, and met the people working to make this region a biking destination. Read more from this series here.

If you know anything about cycling in Baker City or La Grande, there’s a good chance you know about the Grande Tour Scenic Bikeway or the venerable Baker City Cycling Classic. But if you ask local insiders these days you’re likely to hear about a different side of cycling, mountain biking.

During my recent trip to Eastern Oregon, I didn’t expect to be so impressed by the off-road options. Of course, that was before I got on a bike myself and met the people working to make the area a mountain biking destination. Between the Mt. Emily Recreation Area in the Blue Mountain foothills just beyond downtown La Grande, to the trails that wind through the Anthony Lakes area in the Elkhorn Mountains, it won’t be long before this are a is a must-do for singletrack lovers everywhere. 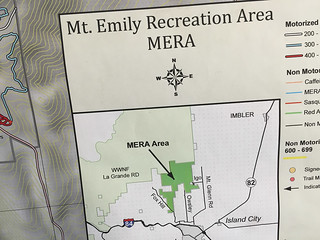 At least that’s what Whit Hartz hopes for. Whit and his wife Mavis own The Mountain Works Bicycles.

“We’re right on the Interstate and there are a lot of people passing by with bikes on their cars between Boise and Bend,” Whit tells me as he opens up his shop for another day of business. “I’d love a big sign that says, ‘There are trails here!'” The trails Whit’s referring to are the 24 miles of single and double-track at Mt. Emily Recreation Area. MERA boasts over 3,600 acres of land and trails that sits just two miles from downtown La Grande. A brochure published by the local Chamber of Commerce makes an enviable boast: “5 minutes from Town to Trails.” 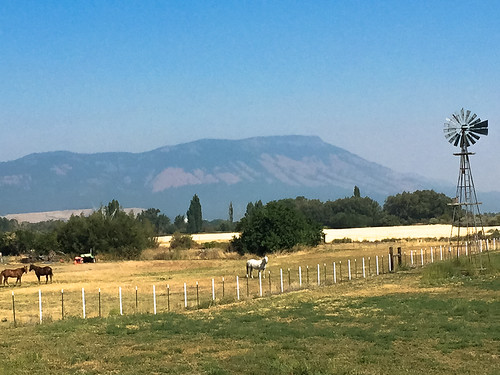 Mt. Emily as seen from the floor of the Grande Ronde Valley.

I didn’t get a chance to ride it myself, but Whit says it’s, “The best thing until Bend.” The Union County Chamber of Commerce is also singing MERA’s praises. Kristen Dollarhide, the chamber’s executive director, told me, “It’s an undiscovered gem for us.” 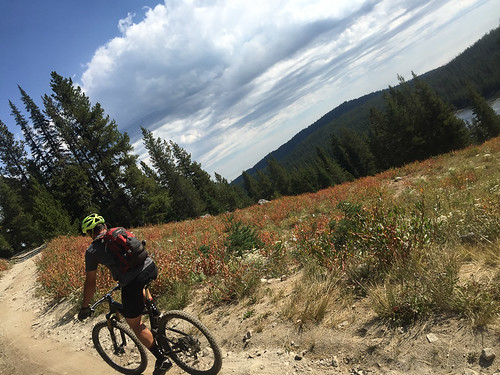 About halfway between La Grande and Baker City lies the Elkhorn Mountains. In their eastern foothills west of the small town of North Powder lies the Anthony Lakes Ski Resort. For the past three months, Pat Thomas and his Range Tour & Shuttle company, have been taking people into these hills and showing them some of the best mountain biking in Oregon that most people have never even heard of.

Thomas moved to Baker City with his wife and two kids from Bend eight years ago seeking more rural and adventurous lifestyle. He grew up in Eugene and has been in the bike industry nearly all his life. He worked at bike shops and worked as a framebuilder at Co-Motion Cycles before moving to Bend. Now he’s an electrician by day and a bicycle advocate and entrepreneur on the side. Along with his shuttle company he’s also the president of Baker Loves Bikes, a non-profit group that promotes cycling in the area and also helps run the Baker City Cycling Classic.

I met up with Thomas in Baker City and we drove the 50 minutes or so up to the parking lot of the ski area. Despite being just a few pedal strokes from excellent singletrack and postcard perfect lakes, we were the only people there. As we got our bikes out of the truck and geared up to ride, Thomas told me about the Elkhorn Crest Trail: 25 miles long with 14 miles open to bicycling on the southern end and six miles on the northern end (one segment in the middle is wilderness and bikes are prohibited). “It’s easily one of the top five trails in the state,” Thomas said, “But most people have never heard of it.”

The plan for our ride was to ride up Summer Road, drop into Hoffer Lake and check out as much of the trails as we could. The views from the top of the road were fantastic. Then when we got onto the trails, I was blown away at how fun they were. Rocky, narrow, meadows, lakes, drops — all the good stuff in a very accessible package. I kept wondering, how have I never heard about this before? 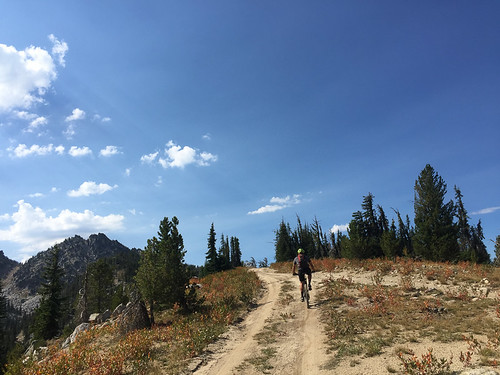 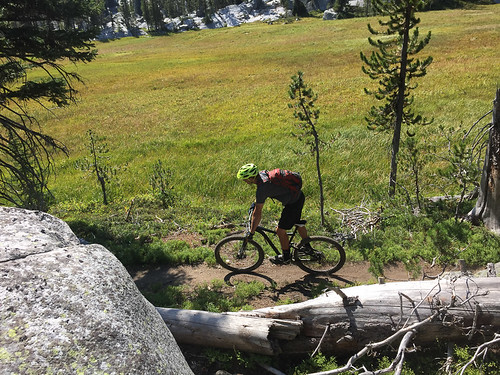 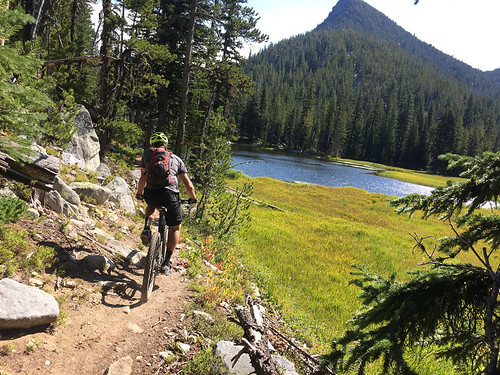 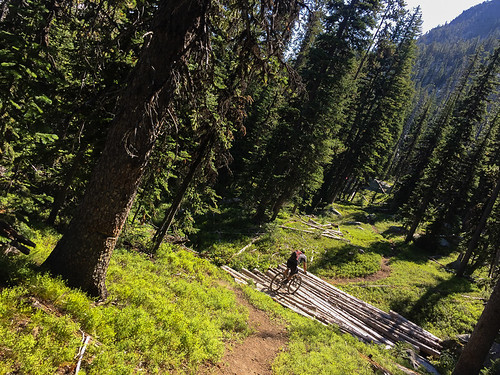 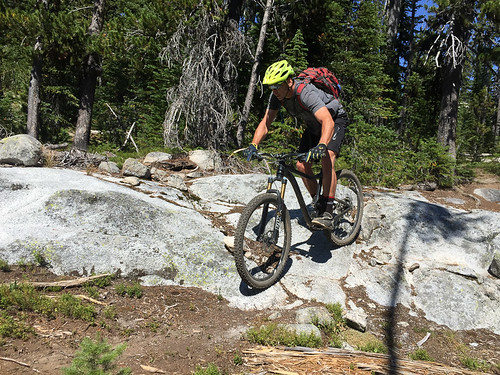 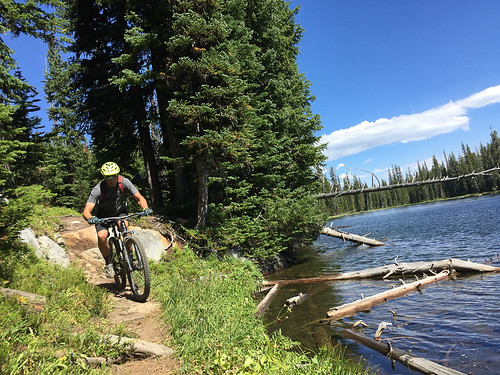 Timothy Bishop, director of Baker County Tourism, says the area is on the front end of a wave of interest in cycling. I met up with him at the well-reputed Barley Brown’s Brewpub in downtown Baker City. “We’re at a really nice sweet spot,” he explained, “Up until now a lot of the drivers for cycling have been external; things like the Scenic Bikeways and the Trans America route that just happens to come through. Now we’re at a point where we’re seeing some organic growth in cycling at the local level. We’re now building a grassroots cycling community.”

And with cycling comes economic development. Bishop said that cycling is “critical” for their rural economy. “When cyclists come in they’re not just passing through. They’re overnighting in these small towns that usually get overlooked by motorists. In a small town restaurant, a group of cyclists can double their earnings for the day.”

While it’s the people visiting that will improve the bottom line for cities like La Grande and Baker City, it’s the people who live there matter most. Bishop is a marketing man and uses the word “asset” to describe a trail destination. He also uses it to describe people like Pat Thomas who have moved to Eastern Oregon with a dream to put cycling on the map.

In the end, Bishop says, “It comes down to having the right advocates.”

— Read more in this series here. Also read this excellent story on the Elkhorn Crest Trail that recently ran in the Salem Statesman-Journal. Thanks to Flagstaff Bike Skate Snow in Baker City for the loaner bike!

Nice coverage, Jonathan! Baker City and environs has so much great stuff going on and so many good folks.

We also really like mountain biking at Phillips Reservoir outside Baker — for slightly less hectic single track. Plus, the road ride through Sumpter to Anthony Lakes is awesome. Then you get to go back to Barley Brown’s for an award-winning IPA and then breakfast at the Lone Pine. It’s SO GOOD!

Sounds like you know your way around these parts Alison. I’m calling you next time I go out there. And Lone Pine is really good. The last story in this series will be about Baker City and my lunch at Lone Pine will definitely get a mention.

Here’s a quick video of the mountain biking around Phillips Reservoir!

And don’t forget about all the trails at Virtue Flat outside Baker City near the Oregon Trail Interpretive Center. If you are in Baker City, you can ride your mountain bike or gravel bike out to just about any of the dirt roads west and north of town and go up into the hills. In less than an hour you’ll be at 5,000 feet, with incredible views of Baker Valley.

Thanks for this coverage. Makes me REALLY want to go out there. Especially considering Barley Brown’s 🙂

Great write up! Thank you for the exposure! Certainly Jared @ Flagstaff would be worth a mention. Keep up the good work.