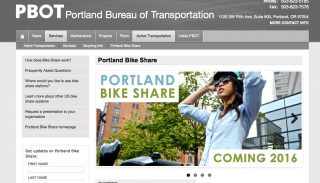 You never know. It could happen.

An unexpected comment by City Commissioner Nick Fish at the council meeting this morning has led to a confirmation from the bureau of transportation that they’re planning an announcement about bike share.

Fish was making his closing comments about the neighborhood greenways report and resolution (that passed unanimously by the way) when he said something that raised more than a few eyebrows in City Hall and on social media.

“This is an outstanding report,” Fish said, “I want to thank Steve (Novick, the commissioner in charge of PBOT) for all the great work.” Then he mentioned a few of the initiatives Novick has championed recently like Vision Zero and Sunday Parkways. Then he added, “And bike share, which we’ll soon be taking up and which I fully support.”

That last line was a surprise because neither PBOT nor Novick has said anything about bike share for many months (at least not publicly).

Following Fish’s comments we asked PBOT Active Transportation Division Manager Margi Bradway if she had anything she wanted to share. “We have reserved a time for a Council session on bike share on September 16th. We will release more information as it becomes available.”

So that’s it. On September 16th we’ll hear more from the city about their latest plans for bike share. If you’re keeping track at home that’s a full three years since they chose Alta Bicycle Share (now Motivate) to implement their system and over eight years since they first started planning for one.

We have not yet learned what exactly PBOT has up their sleeve, but since it’s coming at a city council meeting — and not a public press conference — our hunch is that it won’t be a big and splashy announcement. Don’t expect a date when the 750 bikes will hit the street and don’t expect to hear about a huge corporate sponsor they’ve lined up. It’s much more likely they’ll make a procedural move.

So much has changed in the world of bike share that perhaps PBOT wants to make sure they’re still on the right track with their plans and vendor. Another line of thinking is that PBOT wants to preempt any forthcoming announcement or launch from Spinlister, a private company who says they’re nearing completion of their Portland bike share plans.

8 years? That’s bad news, that means that they need at least 7 more years before it will be implemented. I mean, they can’t do anything bike related for at least 15 years after they start working on it.

Also, it would be nice if these nice, new rideshare bikes had some separated infrastructure downtown. But, of course, now that they hired someone to make the plan, they will have to plan and have meetings for the next 15 years before anything gets built.

Start it small. Make it to where it’s profitable (or minimally-lossy). Then grow it as people demand more.

As more people use it more they will demand safer infrastructure and we win because people want it, not because there’s a fight.

Portland might actually wait so long that the Bike Share phase may be through its fourth and potentially last generation…and onto Google Cars or Magic Drones ..or how about traditional secure all weather bike parking. 😉

Wait, a PRIVATE company is ready to roll out something FOR FREE (to the city) and yet Portland wants to premempt them? What in the world? There are real issues that need to be solved for bikes..and they are spending effort on this?

Yeah..it’s a rah rah thing for bikers..but so, so shortsighted. Put the infrastructure in (cycle tracks, separated lanes, a real bike path on the waterfront) and the people along with the companies will come…just like in the car worl.

No, bike share is public transportation and should be owned by the public.

Amanda Fritz? Is that you?!

I’m looking forward to bikeshare launching, if for no other reason than that it might finally incentivize the city to build out a bike network in the Central City.

Wait. Wait. Since it’s been eight years since the start of planning and three years since selection, it’s probably time for a re-evaluation of the need and the selection process.

Shouldn’t we start by assembling a task force, coming up with goals and objectives, fact-finding trips by staffers and policy makers to other cities to see if bike share works there?

Really, you really need to get it right; don’t go jumping into things.

Oh, and we need a logo and a website to go with the task force.

I recall multiple comments stating that signing Alta = massive delays because their operating strategy was more about winning contracts and not about delivering. Sad that city after city kept going for their bid even though they kept showing an inability to launch on time and on budget.

This whole fiasco is an embarrassment. This city needs fewer plans and more actions.