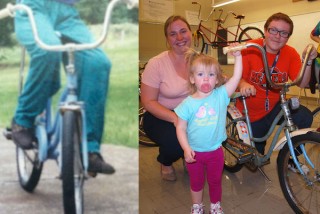 A Hillsboro woman will get a chance to pass her childhood bicycle on to her daughter after a chance reunion made possible by Poynter Middle School’s bike club.

It begins from the perspective of John Sarrazin, an adult leader in the Poynter Middle School after-school bike repair program, who was promoting the program at the Proud to be HSD Festival in downtown Hillsboro on May 30:

He was suddenly faced with a woman asking him: “where did you get that bike?” and pointing to a faded, JC Penney “Country Girl” bicycle with a blue banana seat and multi-colored plastic beads on the spokes. “That was my bike when I was a little girl,” she said, with tears streaming down her face. “I put all those beads on the spokes.”

The bike was one her father had purchased at a garage sale when she was eight. The bike was old then, with its retro styling and 1970s-era seat, and didn’t look like the bicycles her friends had, but she soon grew to love it and did things to make it her own. “The grips hurt my hands, so I changed them to the ones in the picture,” she explained, as she ran her hand over the current grips.

She rode the bike religiously along the country roads where she grew up and even to school, but eventually she outgrew it and stopped riding. One day while cleaning out the garage, her father—unbeknownst to her—moved the bike to the side of the road with a “free” sign on it.

That was on the outskirts of Salem, Ore., more than 15 years ago.

Somehow, the bike made its way to Poynter’s after-school Bike Club two years ago. It was brown with rust and virtually useless, but seventh-grade club member Sean Hagebusch took it on as his project. He tore the bike apart, basically taking it down to just parts, and began cleaning and rebuilding it. He removed the rust and realized the bike was blue, which was a surprise. He then wet-sanded and clear-coated the frame, forks, and plastic pieces; he also greased the bearings and lubed the chain. Although the bike was refurbished last year, Mr. Sarrazin kept it in his collection rather than giving it away. And, on the day of the Festival, he decided to take it with him as an example of the work students do in his club.

The woman who approached him about the bike was Layton Fishback, language arts teacher at Glencoe High School. Seeing her long-lost bike was extra meaningful because her father passed away about five years ago, and she now has a daughter, Jubilee, who will be of bike-riding age in a few years.

Fishback brought Jubilee with her last Thursday when she was officially presented with the old bike at Poynter. She also met Hagebusch, who is now in eighth grade.

I definitely wouldn’t be able to spot my own childhood bicycle in a lineup. Fishback’s clearly meant a lot to her, so it’s great that Jubilee will have the chance to have it in her life, too.

Such a cool story!

This is cool! Many years ago I donated my first road bike (a cranberry Fuji Sports 12 from the early `80’s) to the CCC, and then happened across it on Craigslist several years later (selling for more than I’d paid for it in 1982!).

What a nice story to find in the midst of kind of a harsh period in Portland biking!