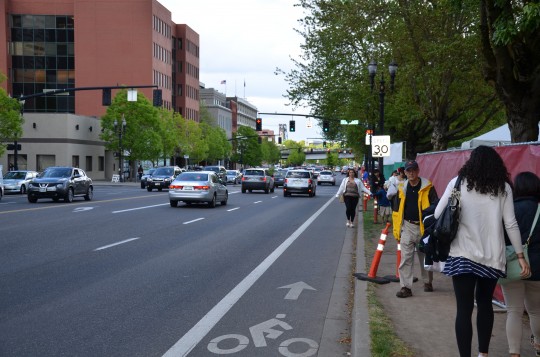 Even where it isn’t blocked, Naito’s existing goatpath often spills over during festivals.
(Photo: M.Andersen/BikePortland)

A week after Transportation Commissioner Steve Novick’s office called out Naito Parkway for failing to provide “a minimum level of safety for the traveling public” along Waterfront Park, other central-city institutions are weighing in.

Ian Stude, the transportation and parking services director at Portland State University, said he’d support either a change to the rules that govern festival fencing plans, requiring them to preserve access to the Naito goatpath, or a larger-scale change such as converting a northbound lane to a mixed-use walking-biking path.

“I think both of those options are better than what is going on today,” Stude said. “I’m in favor of anything that relieves some of the pressure.”

Stude said Waterfront Park’s existing riverside path is “definitely too narrow” for the number of people who try to use it, especially during festival season. He recalled a tour of Portland’s famous park with international planning expert Gil Penalosa in 2008.

Stude said Naito and Waterfront Park are common bike routes away from PSU, which is likely the city’s single largest biking destination but isn’t directly served by any northbound bicycling facilities.

Bjorn Freeman-Benson, the vice president of engineering for fast-growing downtown software firm New Relic, said he too would like to see improvements to Naito.

“Our employees who come from the east side have good bicycle commutes across the bridges, but do find the situation to be more maze-like once they arrive downtown,” Freeman-Benson said in an email Tuesday. “There are a few good thoroughfares, such as the separate car and bike lanes on Oak and Stark, but the narrow lane on Naito remains a problem in the summer for those coming from the Hawthorne bridge north to the Pearl District.”

Then there’s Oregon Health and Science University, another major biking destination — the Go By Bike valet at the base of OHSU’s Portland Aerial Tram typically draws 200 bike commuters at this time of year. Last week, valet operator Kiel Johnson set up a whiteboard poll asking passers-by for their take on Naito and Waterfront Park:

Stude, the PSU transportation director, said his own top preference would be for some sort of design that physically separates people biking and walking while providing comfortable space for both. He said that’s clearly missing during summer festival season, though he thinks at other times of the year Waterfront Park works all right for the moment.

“A lot of days it’s probably fine,” Stude said. “But what’s there now won’t serve our aspirations for bike and walk trips in the future.”

Update 5/13: Oregon Health and Science University has also weighed in. “OHSU supports a street design that is safe for all commuters,” said Brett Dodson of OHSU Transportation and Parking. “It’s great that the mayor and others are exploring options.”

Ian is absolutely correct here…..Naito could use a road diet. How about including it in the downtown multi-modal retrofit? Then integrate the improvements with Multnomah County’s upcoming plans for world class bike bridge access.

The mayor replied to me exactly once during all my many efforts to engage him on bike safety issues, and he said this:

“@__P__J I DO want to create more separated bikeways over time – look at Naito right now and imagine a curb where the cones are!”

So maybe there’s a chance. I just don’t think there is any sense of urgency within City Hall, though.

Naito needs protected bike lanes yesterday. It is a slap in the face from Parks and PBOT to put up those “Fast bikes use Naito” signs in Waterfront Park, then provide a terrible alternative.

Correction: They say “Fast bikes use Naito BIKE LANES” and in the case of 2 in the southbound direction are sending people towards a bike lane which ends within 3-4 blocks.

Just the fact that everyone keeps referring, without irony, to the “goat path” should be an indicator that something is seriously amiss. I’m all for desire paths, but in one of the central attractions of a major metropolitan area, that is also a festival site? That’s insane.

but Portland prides itself on its goats…

I’m not sure the goat path is ADA compliant…

Naito could use a road diet for more than just the transportation aspect. If Naito were less intrusive it would create much stronger opportunities for street level retail, restaurants, etc. on the west side of the street to be more integrated into the park and make for a highly walkable and bikable riverfront district there. Even more so when the James Beard Market is complete and helps draw people in.

Currently, though, Naito acts as a huge divide. Not just the car traffic on the street, but the fact that there aren’t sidewalks on the park side means there is just a vast expanse of no-mans land between the buildings on the west side and the path along the water.

We need to remove the Morrison bridge ramps to Naito. We need to take away a lane of car traffic northbound and put in a lane of people traffic. We need to keep reclaiming this city from the machines and give it to the people.

But bicycles are machines…

The plans for the James Beard Public Market include some major changes to those ramps.

“Stude said Naito and Waterfront Park are common bike routes away from PSU, which is likely the city’s single largest biking destination but isn’t directly served by any northbound bicycling facilities.”

This is why 4th will always be a superior option for northbound bike access compared to 2nd.

Great, then all it has to do is connect with Burnside…

To say nothing of Park…

I feel like its a tough position because that traffic is horrificly long and bad from south to north waterfront on a regular friday, rain days don’t help, and so many people commute into work from SW in that direction.

maybe cut out a second lane from the park and make the park smaller for a wider rode that is then dedicated entirely to these modes of transit.

I personally avoid naito in my car or bike, but i feel the pains of the festivals

I won’t pretend to be an expert, but my experience with rush hour on Naito is northbound in the morning and afternoon rush. The morning rush northbound never seemed particularly bad. The afternoon rush is a mess up to the Hawthorne bridge, then pretty clear beyond that. So maybe there are other issues I’m missing, but my experience says that at least beyond Hawthorne the second lane would barely be missed. Taking it out of the park is a terrible idea in my opinion.

There is a Better Block project in the works for Naito, designed by PSU students. There’s a whole bunch of drawings and positive feedback from the city. So hopefully we can get this fixed this summer. (Or at least a preview.)

Good to hear Chris. I’ve been having an exchange with a traffic engineer at PBOT about specific changes that will hopefully be made to the crosswalk connecting Waterfront Park to the sidewalk on the east side of Naito. Just in draft stage, but they are working on improvements there too.

Nice work, Michael, Kiel and others, getting this problem and possible solutions exposed.

It’s not a bike path; it’s a mountain bike trail in a city park!

“We need to remove the Morrison bridge ramps to Naito”

And, while we’re at it, let’s close the rest of Harbor Drive and turn that into a park, too. All Harbor Drive is is a conduit for freeway traffic to flood Naito, and a barrier for east-west connectivity on the south side of downtown.

It would make a great park — a green connection from South Waterfront to Tom McCall Park.

& we can name the park after whichever politician has the spine to propose the idea and make it happen. Any takers? Hales, Novick, Blumenhaur, Caleb?

I’d rather leave harbor drive as the I-5 access and instead replace the 5th/broadway on-ramps. Unless you re-route I-5 and the streetcar and move Tilikum, Harbor Drive is going to remain an east-west divider. I’m not really sure what to do about Zidell Marine, but except for that bit it’d be possible to extend the existing park frontage south from Marquam all the way through south waterfront and down to Old Spaghetti Factory, providing a continuous corridor for ~2mi.

RE: waterfront Path. Haven’t we learned we can’t build ourselves out of congestion? (hehe jk, jk)

Hopefully in this case we won’t! 🙂

Sidewalks and bike lanes, not MUPs. The only place where MUP work are places without the population to have congestion of either mode. Those are three distinctly different modes of transport, and they need 3 different places to go: Motor vehicles, bikes, and pedestrians. Naito is already overcrowded for bikes and pedestrians, mixing the two will not improve that situation.

So I was riding northbound on this very street yesterday and the Rock n Roll marathon was being set up as was the Rosefestival. There were spots that were outright blocked by fencing which forced bikes into the car lane. Also pedestrians walking in the bike lane not looking where they were going.