Democratic Senate victories set the stage for a 2015 transportation bill 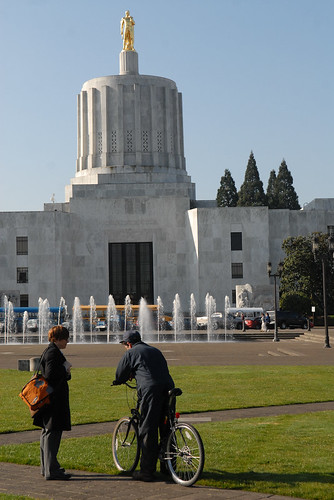 To catch you up on the basics of these races from a bike-politics perspective, we’ve summarized each of them and added some context from the best public prediction service we know of: a prediction survey of 201 readers of the liberal politics blog Blue Oregon.

Here are the six races that were poised to swing the balance of Oregon’s senate and decide whether state politics are likely to veer a bit further left next year:

Bruce Starr (R-Hillsboro) vs. Chuck Riley (D): Starr, the incumbent, is a business-oriented social conservative whose 15th District includes Hillsboro and Forest Grove. He’s currently on the Senate’s Business and Transportation committee, was a key backer of the Columbia River Crossing and in 2011 unsuccessfully tried to use Portland’s request to lower speed limits on municipal streets as a bargaining chip to raise freeway speed limits to 75 mph statewide. Starr easily fought off Riley four years ago in this purple district, but billionaire environmentalist Tom Steyer has funded ads attacking Starr’s environmental record as part of an effort to strengthen Democrats’ majority. BlueOregon readers gave Starr a 67 percent chance of survival.

Outcome: As of 9 p.m., this race was down to the hundreds of votes.

Chuck Thomsen (R-Welches) vs. Robert Bruce (D): Thomsen is a relatively active-transport friendly Republican from Hood River whose 26th District includes a big chunk of East Portland. He’s also on the Business and Transportation Committee this year. He voted against the Columbia River Crossing along with the more conservative side of the Senate Republican caucus. 82 percent of Blue Oregon readers predict a Thomsen win.

Alan Olsen (R-Canby) vs. Jamie Damon (D): Damon served briefly as a moderately pro-light-rail voice on the Clackamas County commission before being ousted by the more pro-car Tootie Smith. Olsen, who opposed the Columbia River Crossing, is a first-term incumbent in the suburban 20th district, which usually leans slightly Democratic. 67 percent of Blue Oregon readers predict an Olsen win.

Alan Bates (D-Medford) vs. Dave Dotterrer (R): The 3rd District has another rematch from a close 2010 race, this time with the Democrat as the defending winner. Bates was the only senator who didn’t cast a vote over the Columbia River Crossing. He’s also spoken warmly of a revenue-neutral carbon tax as a way to “rejuvenate many rural parts of the state.” 87 percent of BlueOregon readers have Bates to survive a strong challenge from Dotterrer, a retired Marine colonel turned GOP budget analyst. Kim Thatcher (R-Keizer) vs. Ryan Howard (D): Thatcher, the 13th District incumbent, deserves recognition for a particularly spectacular scandal in which her highway construction company destroyed evidence and engaged in a cover-up while being investigated for fraud by the state Department of Transportation. Her opponent, Ryan Howard of Newberg’s city council, was recognized by the Bicycle Transportation Alliance in August as Volunteer of the Year for his work on a Safe Routes to School conference. 79 percent of BlueOregon readers think Thatcher will hang on.

Betsy Close (R-Albany) vs. Sara Gelser (D-Corvallis): Close, the 8th District incumbent, voted against the Columbia River Crossing on anti-tax grounds; Gelser, who serves in the House and is running for a promotion, voted for it despite expressing skepticism early in the process. Gelser, who has a 94 percent rating from the Oregon League of Conservation Voters for her House votes, calls climate change “a top issue” and has also benefited from Steyer’s out-of-state donations. 87 percent of BlueOregon readers think Gelser will knock off Close, creating the “Betsy-proof majority” state Democrats have wanted in the Senate.

In other major transportation-related races, Gov. John Kitzhaber (D) was cruising to a relatively narrow victory over Dennis Richardson with 49 percent of the vote. Measure 88, which would have let people without legal immigration status become legal drivers, went down hard with 68 percent opposed.

And finally, in the Washington state legislature, Republicans seemed to be holding on to the state Senate seats that will prevent pro-transit Washington Democrats from rebooting the Columbia River Crossing project.

The makeup of the Washington Senate may be even more pivotal in weather the CRC monster is reanimated or not. We’ll keep a weather eye open.

Good point – I didn’t have time to get to that in the preview but I’ll be watching too and including it when we update this post with results.

The Oregonian has called races for Bates and Gelser – that’s 2/6!!

Damn, too bad about Ryan Howard, what a strong advocate he would have been. Hoping he runs again.

I wonder, if we get a gas tax increase, how that will affect Portland’s need for the street fee/tax and if the City government might go for a lesser amount to defuse some of the objections.

My guess would be Hales & Novick would change their minds about that in full public view two or perhaps three times.

I don’t know, they appear pretty “all in” invested in this tax. I could see them riding it all the way out of office.

(Then again this city continues to baffle me in its elective choices, so who knows?)

Gas taxes are divided state-wide, based on population. Much of it would go to ODOT. A local option, as is already done in many local jurisdictions, is the best solution. Preferably, a local gas tax.

They tried a city gas tax in Hood River a few years ago that went down in flames. I personally agree that localizing it is preferable, because it’s coming inevitably and the further up the funding chain it gets approved the less people who didn’t want it to begin with will actually benefit from it.

I know it’s just a local race but this guy: http://bikeportland.org/2014/10/01/milwaukie-council-candidate-scott-barbur-faces-questions-facebook-post-111565

Closer to home, Karin Power was elected to Milwaukie city council. She got my donation for her bike-friendliness — and her thank you note was hand-written!

Which could actually make it harder for Dems to get votes for a transportation bill, since Starr has served as a bridge to pro-business Republicans in the past. Eh? This was a dynamic I didn’t understand last week.