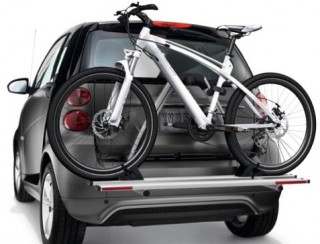 Racks could help Portlanders get
to far-away trails.
(Photo: Car2go)

International car-sharing service Car2go has announced that Portland will be its testing ground for bike racks on their vehicles. In an email statement to Portland-area members, the company said the move comes after numerous requests from customers.

Here’s a snip from the announcement:

“Since our launch in Portland back in 2012, we’ve consistently heard one specific request from our valued members – installing bike racks. As bicycling is such an integral part of daily life here in Portland, it’s no surprise that we’ve been very eager to find a solution that incorporates bike racks onto our blue and white car2go vehicles, allowing our members, who love bicycling all the same, to combine the two transportation options in a simple, safe, and durable way.”

Car2go is “exploring” the new program for its Portland members, but there is a caveat. The new bike rack would prevent the tailgate from opening. With that in mind, they have released a survey to gather feedback before moving forward with a larger test of the program.

“If we find that our pilot program is successful here in Portland,” the announcement says, “we’ll look into outfitting more of our fleet in select cities nationwide.” (Car2go currently operates over 12,000 vehicles in 31 cities worldwide.)

When we reported on one man’s solution to carrying bikes on Car2go vehicles — the “Free2go” rack that failed to meet its crowdfunding goal — Car2go was opposed to the idea. A spokesperson for the company said that use of a third-party bike rack would violate Car2go’s terms of service and could result in a lost membership.

Car2go says they plan to review survey feedback and be in touch with members about next steps.

I view car2go’s question of forfeiting access to the trunk for the sake of adding bike racks as a false choice. A bike rack designed to give access to the trunk, when the rack is empty, would be easy to design. Case in point: http://www.smartcarofamerica.com/forums/f19/diy-bike-rack-5150/

Only thing I would add, is there should be a way to lock the bike to the rack.

I received the email in question and I think the survey’s question was pretty unclear. After reading it carefully, it seemed to be saying that the bike racks would prevent use of the -tailgate-, not hatchback. I don’t use Car2Go often, so I’m unsure if their smart cars offer the function, but I do know some of them can open in a clamshell manner, in addition to the standard hatch lift (such as seen here: http://seminoleoklahoma.com/images/smart/open%20trunk.jpg ).
From the email/survey it was very unclear to me if that folding down of the tailgate is what would be impacted, or if the entire rear hatch would not be able to be opened.

The survey link appears to be member specific. If you’re a member, you’ll get an email with a link tied to your own membership.

If your not a member, but would would join if this rolls out, try sending feedback to portland@car2go.com

Nevermind. I didn’t check the announcement link Jonathan provided. It looks like it’s available to everyone.

I have a bike rack that fits on the hatchback of my vehicle. the hatchback can be lifted with the thing still attached, easy when empty, difficult, but still possible with 2-3 bikes loaded.

I’ve never used the rear hatch… I only use Car2Go for quick trips, not to carry things… I shop via bus or bike so have no need to a rear storage area in the Car2Go vehicles…

It’s no surprise that the photo shows a mountain bike on the rack. I can do many amazing road rides from my door, but have to drive to do a decent mountain bike ride. “Mountain bikes are bikes too.”

I often joke with my hardcore MTB friends… “Mountain biking – isn’t that that sport where you drive your bikes up hills?” 😉

Sadly, mostly only in Portland…..

That’s probably because you don’t live next to a mountain.

Keep in mind, you dont want to drive to a trail outside the home area (home area is between willamette and I-205). If you do, then the car will sit there racking up your bill while you ride your bike. It adds up quick. You have to be back in the home area to check the car back in.

On the weekends there’s a promotion where you can keep a car2go for up to 24 hours for only $50. That’s a pretty good deal compared to ZipCar or one of the national car rental companies.

Enterprise has pretty great weekend specials, rent a car from Friday-Monday for $10/day. Not available at the airport though.

Damn, really? Is there a catch/mileage limit, etc? I’ve been spending $70-80 a day with Budget per day.

Some of the better travel credit cards have policies built in, and in my case my company has coverage under their agreement with Hertz which I can take advantage of for personal use too (but they’re not always the cheapest).

Another good option is Beaverton Toyota, which has an extensive rental program and several models for under $30 per weekend day. Be aware that unlike most traditional rental-car companies, they do expect the cars to be returned clean.

But still … BT, Enterprise, Zipcar and pretty much all other car rental options suffer from the same problem at issue in this thread: NO BIKE RACKS. Yes, most of the non-car2go choices can fit a bike in a car, but that generally only works if the trip is for 1-2 adults. Still best to have a vehicle with a bike rack if I want to take my kid biking.

but still unauthorized and could get you banned from car2go…

Inno makes a durable and well-designed rack. I had to switch from roof trays when I got a MTB several years ago and their INA388 has been a solid performer, which I’ve compared to similar style racks from Yak and Thule. It keeps my 62cm 15lb race bike as steady as it does my 26″ MTB, even at high speeds in gorge winds, and the built-in cable lock works OK (though finicky). I was about to buy the hitch-mount version for my van when I was given a Yakima: http://www.innoracks.com/details/INH305/index.html

Unlike the Yakima model I was given the Inno allows my Econoline’s doors to open with bikes on, but the price is right for such a small inconvenience for the few times I get to go camping anymore. (Sorry, I know Yak is ‘local’ and there are some smaller American-made competitors as well).

Uh oh. My empathy detector is ruining this for me. I’m not sure it’s worth it to me as a member if it means having every person who doesn’t want to put a bike on a Car2Go upset with the people who do because they’ve now loss direct trunk access—one of the only features these no frill vehicles offer. I’m pleased they’re looking for a solution and asking people what they think, but I hope they can find a model of rack that doesn’t sacrifice the trunk.

I am a huge fan of Car2Go and would love these racks. I agree a model that allows trunk usage would be better, but I personally never use the trunk. I use Car2Go for point to point transport when I am not going to bike (usually because I’m going to meetings and/or the weather is inclement).
One interesting thing here, though, is that posters are missing what to me is the most obvious advantage of the rack. You can never be guaranteed that a Car2Go is in easy walking distance, but i’m sure that I can get one in close RIDING distance. I know many folks here would just ride the whole route, but there are situations where you don’t want to do this.
Having a bike rack means I can hop on my single speed, find the closest vehicle, slap the bike on back, and off I go.