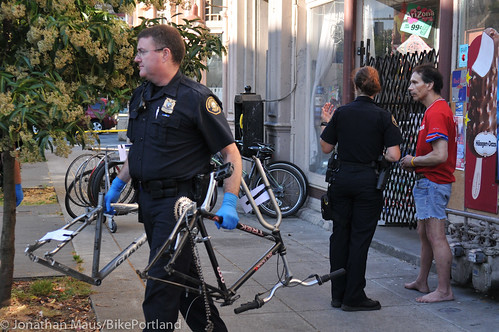 It’s one of the maddening paradoxes of the bike world: biking is so cheap and efficient that it’s a blip on almost every chart.

Biking infrastructure is so easy to build that there’s no army of contractors to lobby for it. Biking education is difficult because it’s so easy to just buy a bike and start riding. And bike theft doesn’t get penalized because a bike can be the most important object in someone’s life even though it’s only worth $50.

Reader Todd Hudson captured an aspect of this problem in a comment beneath this week’s post about a Portland cop who’s leading the fight against bike theft from the front lines.

I used to blame PPB for the high prevalence of bike theft, but learned Multnomah County (under whom are prosecutors, criminal courts, and MCDC) is really the weak link.

Remember Robert Charles Dady? *After* he was featured here a year ago, he’s earned another 28 CHARGES related to theft (assuming I’m reading PDX mugshots correctly), including felony theft. His name is a rash all over the DA’s website. Why is he not locked up after dozens of arrests? Some people cannot be rehabilitated and need to be isolated from society.

Since MCDC is overcrowded, non-violent offenders matrix out ridiculously fast, and go straight back to car/yard prowls and bike theft. Their sentences are minimal or they once again immediately matrix out of jail. Cops only affect them incidence of getting caught, and the County affects the actual punishment for getting caught. With no real punishment, getting caught doesn’t matter much in a thief’s calculus of whether to go back stealing stuff – it’s not helpful that a thief gets taken to MCDC and is back on the street before that cop’s shift is over.

tl;dr – we could bust every bike thief in the county, but they go through a revolving door back to the street and start stealing again. This is because Multnomah County does not make property crime a high priority.

Todd’s was the first of several comments on the theme of how courts’ handling of bike theft could be changed. If you’re interested in this issue, don’t miss the conversation between Daniel L and Edward about whether bicycle thefts should actually trigger Oregon’s felony charges against vehicle theft. That’s an issue that seems ripe for more reporting. Stay tuned.

America created for itself a “everybody for himself” society. Get it any way you can. At the same time America wants to throw everybody in jail, but doesn’t want to pay for it. This guy’s playing the system that’s been set for him.

are
Reply to  Mike Quiglery

i think mike has nailed it. the consumer capitalist culture destroys community. everyone is on hir own lookout. look at wage theft. look at wal*mart externalizing the cost of basic employee benefits. look at people just throwing trash on the streets. this guy is simply calculating costs versus benefits without weighing anyone else’s needs. we can clamor for more enforcement on this one front, but then we are choosing to allow theft on other fronts. also of course this guy has human needs that no one, including probably himself, is considering.

“At the same time America wants to throw everybody in jail, but doesn’t want to pay for it.”

I don’t think this is a problem specific to Multnomah County.

One little piece of math to keep in mind. It would almost certainly be less expensive for the city and county to just pay for every bike that is stolen in the area than to investigate and prosecute every occurrence of bike theft.

That is, of course, if you could assume that the bike theft rate wouldn’t change, which you cannot.

Maybe true from a static glance at the numbers, until you add in the cost of preventing abuse. (Dammit, my Colnago C60 got stolen again! ;-).

Exactly so, the cost of a bike theft is much higher than the dollar value of the bike.

But when you’re looking at how to prioritize limited resources it is easy to dismiss bike theft as less important due to the generally low dollar value.

I pay 250 a year for renters insurance with a $100 deductible. If my $2,200 electric bike is stolen, I am covered plus, I have the benefit of everything else renters insurance covers. I would really recommend it. There is another thing that goes with insurance and that is peace of mind not having to worry about the this type of thing. This is the price of admission in my mind. Not a fair price put one you pay sooner or latter.

Portland should add bike theft to the list of offenses that can be used in it’s exclusion zone policy.

Since social services and economic opportunity draw these people to the city center (in the same way it does everyone), assign a cost to thievery by forcing them out of downtown and away from the services they depend on.

^^^^ this. This right here. This times ten thousand.

Vote yes on 91 and free up some resources.

I’d like to hear the MultoCo DA’s response to this issue. Seems like they could at least be prosecuting the occasional egregious case against multiple-repeat offenders.