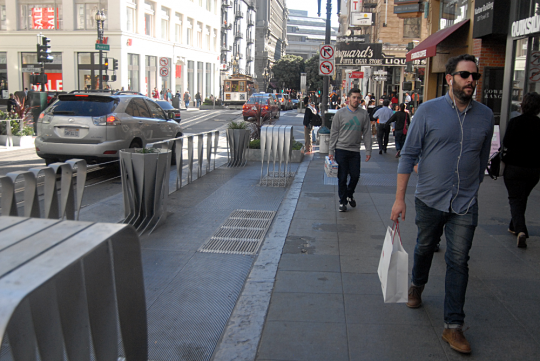 A parklet on Powell Street in San Francisco.
(Photos by Michael Andersen/BikePortland)

I spent a few days in San Francisco last week, learning and sharing stories at the NACTO Designing Cities Conference. It’s not my favorite city (obviously) but it’s a lovely place.

Once in a while, though, they definitely screw up.

A lot of downtown SF has reached the point that its sidewalks are pretty much crowded all day. Nowhere is that more true than Powell Street, a Times Square-tier tourism zone that runs alongside the thrumping cords of the city’s historic cable car. 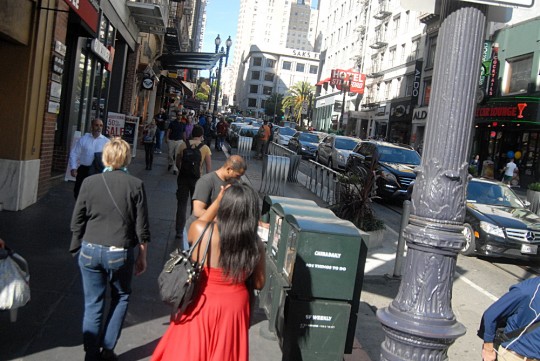 In 2011, with these crowds in mind, the city accepted a donation from Audi that paid for a row of aluminum parklets bumping out from the sidewalk along Powell.

Unlike with Portland’s “street seats,” there’s no pressure to buy a drink to use this public space. That’s nice. But the weird thing is that a bunch of this new “pedestrianized” space offers nothing at all to do. 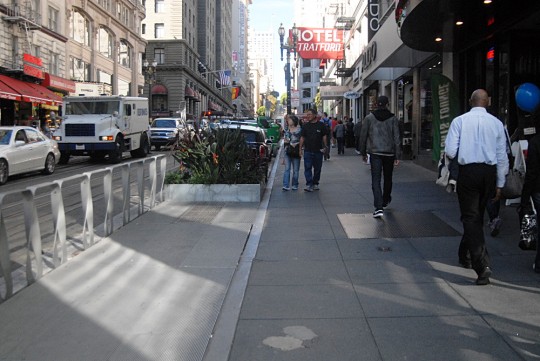 You can’t walk on it, except sort of as a right-side passing lane, because it ends after 20 feet. You can’t sit in it, because there’s nowhere to sit. You could lean; people occasionally leaned. You could park a bike; a few folks did this. But in general: there is no way to use large swaths of these parklets.

The obvious missing ingredient here is seating. And seating is not entirely missing from these parklets. Indeed, on almost every occasion that the parklets made seating available, it was being used: 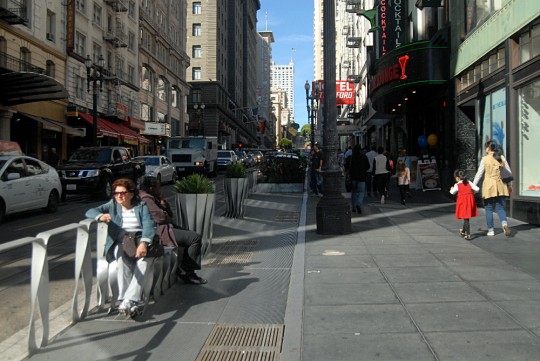 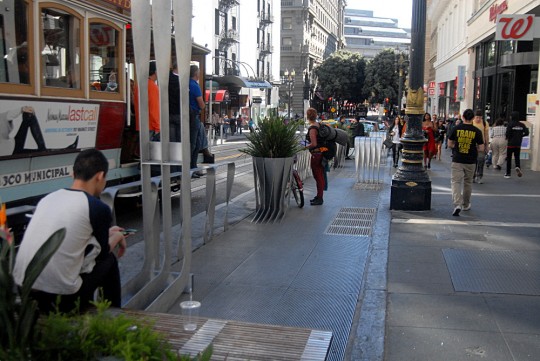 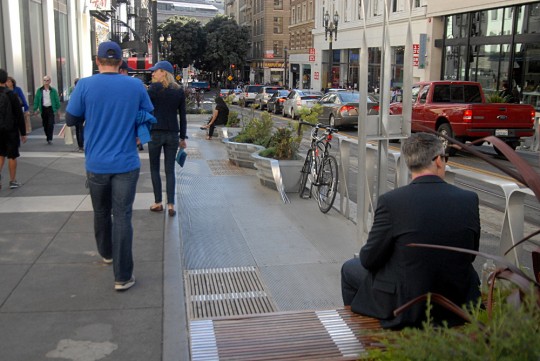 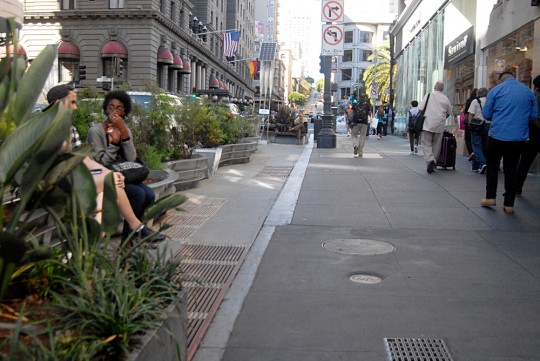 I’m sure there are lots of things that people occasionally use this space for. I saw several cigarettes being smoked. On Friday night, I saw a man laying out artwork for sale, using this otherwise empty space as his display area.

And there’s little question that these parklets are doing Powell Street more good than they would as a few extra car parking spaces or a pair of additional travel lanes. Also, the plants look nice.

But for most of the day, these parklets are just pockets of dead real estate in the bustling, seating-starved city around them. I’m no landscape architect, but the lesson for cities couldn’t be clearer: if you build public parklets, put stuff in them.

But… but they were sponsored by BMW! That’s got to count for something.Their sleek good looks, perhaps.

Yeah! And at least the appear to be EXTREMELY EXPENSIVE. There’s that…

Is Audi the same as BMW?

How dare you not know the difference, you haven’t been watching enough TV to get brainwashed into knowing every single make of car in your sleep through the endless ads!!!!! 😉

One special thing about these parklets was that they removed all parking from both sides of the street along a couple blocks of a commercial street. (there were a couple spots remaining for loading/ADA).

Being in the heart of downtown SF is very different from the conditions of say, NE 28th, but this offers an example of where on street parking was completely removed without resulting in a downturn of business.

“…but this offers an example of where on street parking was completely removed without resulting in a downturn of business.” Nick Falbo

If, San Francisco businesses truly are saying the parklets aren’t resulting in a downturn in business. SF business people must have some reaction to the parklets. Using the parklets to add greenery, softens the harshness of the street. Design of the parklet fence, and planters, is simple, clean.

Street buskers could likely make use of the parklets, whether seating is there or not. As long as the police and merchants aren’t bugging them, so too, could panhandlers, noting that they often seem to sit on the sidewalk when hitting people up for spare change.

Snarkiness aside, I do remember discovering these on a business trip to SF a few years ago. They were so ugly and weird that I thought they might be temporary (and at the time they were branded with BMW, some kind of urban design grant). But they did provide welcome congestion relief on a couple of blocks with too-narrow sidewalks. Good for tourists who need to stop and stand and take a picture without blocking the flow of foot traffic.

Portland’s street seats are public spaces, contrary to what a local store front may want you to believe.

Wait, really? I didn’t realize that. What about Ankeny?

Street Seats is a program of the Portland Bureau of Transportation (PBOT) that allows businesses or non-profit organizations to convert on-street parking into other public uses, such as café seating or a mini-park.

looks like they can be either seating for a restaurant, or public space, but not both…

but right now it looks like only businesses have them…

The Mississippi Pizza Street Seats, 3500 block of N Mississippi, is open to the public. But, it “looks” private and feels private. The only thing saying its public is a little 8 1/2 x 11 sheet with some vague text (as I recall).

When the applied to renew their permit this summer the Boise Neighborhood Association asked that they make a larger, more clear sign indicating that its public space.

Our request, May 2014:
“1. Public Signage: assuming the renewal is approved we request that signage advising the public the Seats are available to all be more prominently displayed. Though currently signed to this effect the sign is small and located in a less-than-obvious location.”

I haven’t looked to see if they’ve improved signage or not.

I am pretty sure they don’t put stuff in them because… homeless people.

That was my exact thought. SF is pretty harsh about public seating areas, certainly nary any broad benches.

so much for simple design, WTH, hmm would total sidewalk surf safely 🙂
maybe not….

Huh. This is the first I’ve seen or heard of them, but my reaction was that I like them BECAUSE there are no people or things in them! I agree with Patrick Barber (above); it’s nice to simply have some air and space, especially when sidewalks are congested 24 hours a day. Not happy about smokers seizing on them, though that was predictable.

I recently took a trip to San Francisco – the overall impression I got was that Pedestrians are NOT WELCOME.

So maybe these mini parklets are just an extension of that mindset.

San Francisco has many nice parklets. Has been several years since I was there, but the last time I was there I enjoyed the one out in front of Mojo cafe on Divisadero. That awful street is a narrowish 4 lane with parking on either side. A bike rider with enough courage to ride on it must take the lane. In that spot, it turned a mean street into an area where people could gather, simply by taking away a few parking spots. It is definitely an asset to the neighborhood. I saw plenty of bike parking and lots of seating that did not appear to be “owned” by the cafe. And on that sunny winter day it was being enjoyed by all sorts of people!

I hope the Powell street parklets get some street furniture. It helps if there is an adjacent business that sells food or drink.

Our newest Seattle parklet next to an ice cream store not only has seats, it has seats that are SWINGS. http://seattlegreenways.org/blog/2014/10/22/enjoy-scoop-new-molly-moons-parklet/

I used to be a courier in SF and I hated this. It’s already impossible to bicycle on that stretch of Powell, but sometimes you just have to! And these take up biking space. I could understand it if they were as useful as other parklettes around the city, but they are definitely now.

Funny… just last night I was out there with friends and I learned the perhaps one use of that space: the collection of metal things next to each other (bottom left corner of first photo) form a kind of table, which was useful for holding plates of pizza (but yeah, we had to stand instead of sit at this “table”).