Bixby and her human (Mike Minnick) roll through Portland 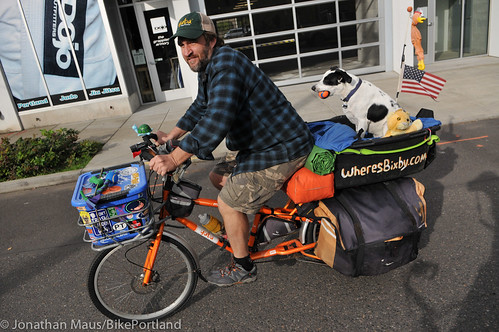 Bicycling is probably the biggest thing that has ever happened to Austin, Texas natives Bixby and Mike Minnick. Just three years ago, Mike was a self-described chain-smoking couch potato who took up cycling on a whim. Bixby was a shelter dog who needed a good home.

Together, they’re on a journey that is changing both of their lives — not to mention inspiring thousands of people along the way. 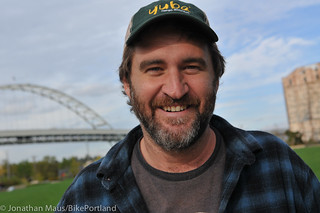 Minnick at Fields Park this afternoon.

The duo rolled into Portland yesterday, 14 months into a massive, cross-country journey that started in Lubec, Maine last year (Bixby is chronicling their journey at WheresBixby.com and on Facebook). Minnick, 38, has ridden his Yuba Mundo cargo bike from the east coast, down to the Florida Keys, through the Gulf Coast, and then up to the Pacific Northwest. After hearing about them on Facebook a few weeks ago, we met up at Fields Park earlier today.

Between bouts of fetch with Bixby, Minnick expounded on the virtues of traveling the country by bike with an adorable border collie mix as a co-pilot. “She’s a big attraction wherever we go,” he said. “I’ll leave her in the bucket while I run into a store and when I come out there will be 30 people standing around taking pictures.”

After she was done playing fetch, Bixby leaped up into her spot on the bike’s big rear rack. Minnick has bolted the bottom half of a dog crate to the rack and filled it with blankets, a pad, and a sleeping bag so Bixby stays warm and comfortable. A fetching stick is bolted to the side, along with some dog toys, a travel guitar, a spare tire, and the rest of the things you tend to accumulate when you live on your bike (like a big rear reflector he picked up off the road in Louisiana and an air horn he picked up in Florida, because “Florida is by far the most dangerous place to ride.”).

Minnick says his bike and all the gear (including Bixby) weighs 276 pounds.

Like many cross-country riders, Minnick is doing this for a cause. His goal is to raise money and awareness for dog adoptions through shelters and humane societies. “Bixby was a shelter dog too, and she’s a shining example of loyalty and she’s always ready for adventure.” (I can attest to Bixby’s awesomeness.) 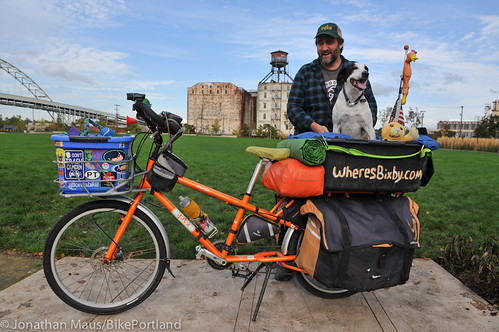 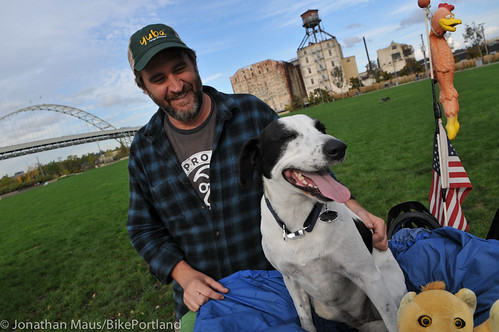 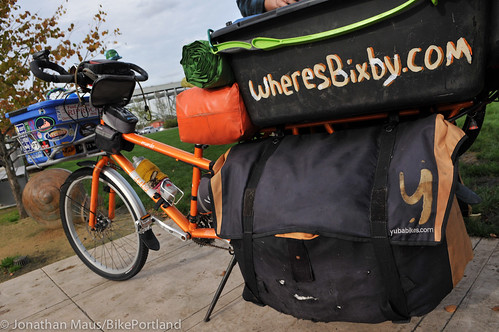 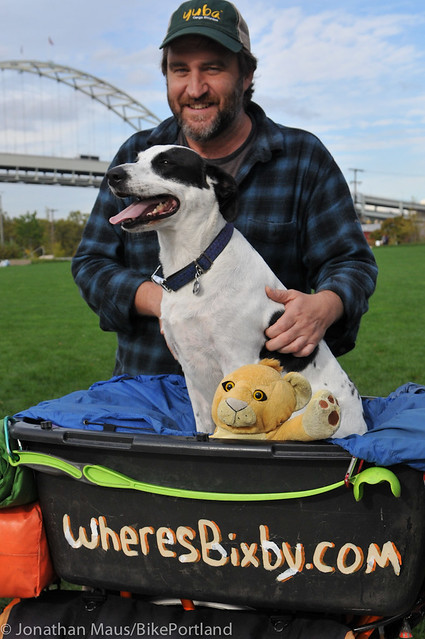 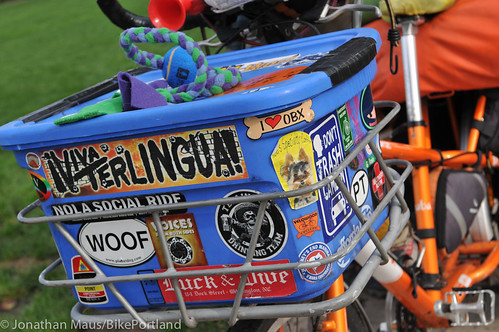 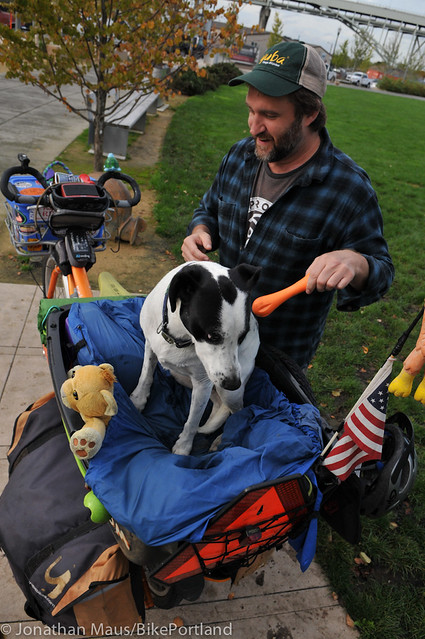 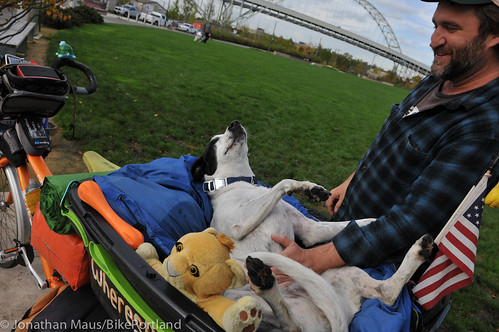 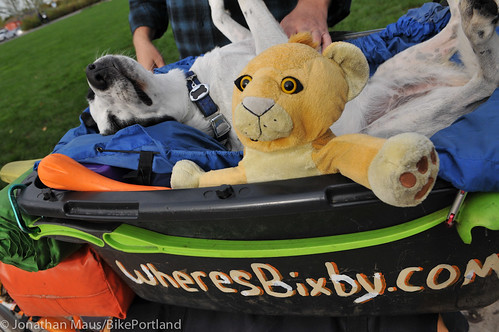 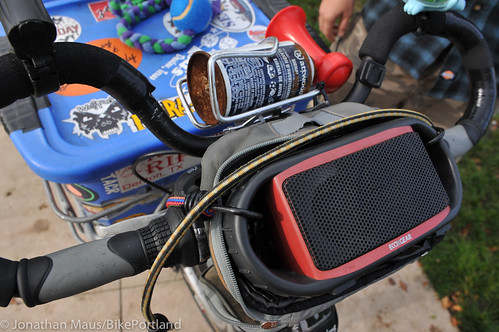 Mike has a nifty solar panel that keeps his speakers charged and he uses a bluetooth signal to get turn-by-turn directions from his phone. 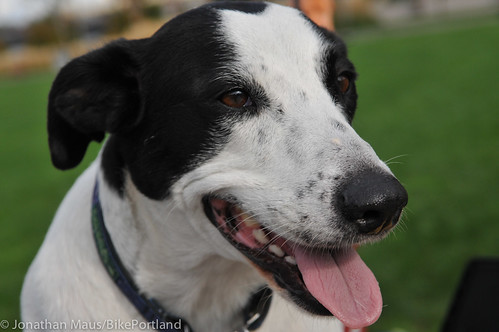 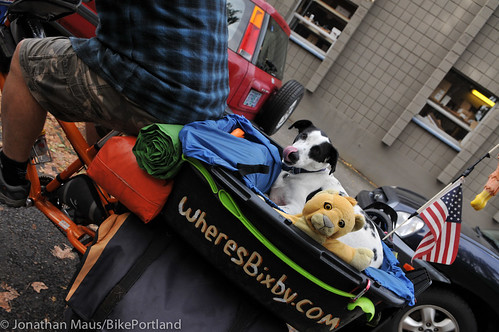 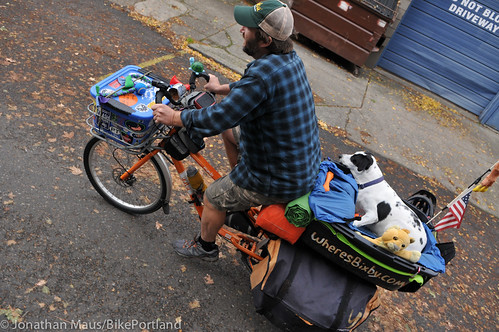 But this ride’s cause is also Minnick himself. When the idea of bicycling got him up off that couch three years ago, he sold everything he owned and went on a long road trip that ended with the start of his current journey. Asked what the end point of his trip would be, he gave me that classic bike tourer non-answer. After trying to name a few places to satisfy my question, he admitted, “I set out on this to change my life, and I don’t want to stop anytime soon,” he said, gushing about how cycling has had such a profoundly positive impact on his life. “And this is coming from a guy who used to drive two blocks to get a pack of smokes.”

If he does ever settle down, Minnick says he’ll probably write a kids book about all the adventures he and Bixby have gone through. “Our daily life is so much like a cartoon.”

In the meantime, life will remain gloriously simple for this endearing pair. Asked for any words of wisdom as he pedaled off to his next destination (Cycle Dog on NW 23rd, naturally), Minnick said, “Hug your dog. Ride your bike.”

— Mike and Bixby are at Pioneer Square right now (Monday, 10/27) and will be there until about 5:30 or so. Roll over and say hi, then consider following them via Facebook, Twitter, or Instagram.

we all saw them roll by my studio today during a photoshoot! That dog was stoked!

You have a cute dog, good luck

+10000 Wonderful uplifting story and pictures. You made my day.

That is such a wonderful story, and such great pictures. They both look so happy!

I was lucky enough to see Mike and Bixby on the Moody Cycletrack yesterday. I waved as I would to one of my regular biking buddies then realized they had no idea who I was.