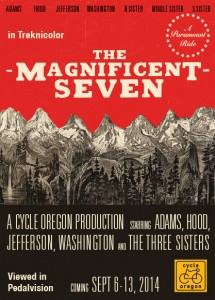 Something about eastern Oregon keeps calling me back.

In the past six months I’ve made three trips east of the Cascades and tomorrow I’ll shove off for yet another one: the Cycle Oregon Week Ride.

The first two trips I took to the place known as “Oregon’s dry side” were for work: a reporting/riding excursion in The Dalles in March and a trip to Treo Bike Ranch in July. Through my bike adventures and people I met along the way, I’ve learned that the towns and roads in this region have so much to offer I wanted to share them with my family. So, over the long long Labor Day weekend I packed up our mini-van and took my wife Juli and three kids on a camping/road trip. We drove out to the Gorge, stopped in The Dalles, then went south into Heppner, the John Day River Valley, and then looped back up through Fossil, Maupin, Dufur, and then back to the Gorge. It was fantastic.


And our trip was like bikenomics without the bike — because I wouldn’t have done it without first discovering those places with my bike.

As for Cycle Oregon, I haven’t done it since 2009 so I figured it was time to check back in (especially now that Alison Graves is their new executive director). And guess where the route goes this year? Eastern Oregon! In fact, I’ll be pedaling some of the same roads through the same towns I just drove through on Labor Day. 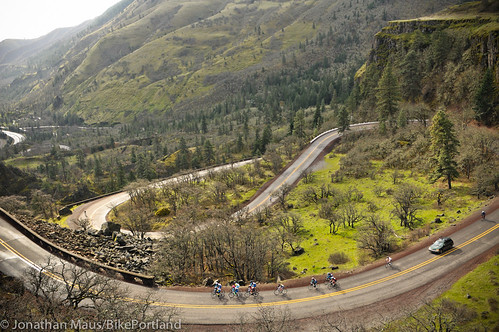 The theme for this year’s Cycle Oregon is “The Magnificent Seven”, a nod to the seven major peaks — Adams, Hood, Jefferson, Washington, and the Three Sisters — we’ll be within sight of each day. The route is relatively tough for Cycle Oregon, with about 35,000 feet of climbing and 489 miles of riding over the seven days.

We set up base camp in The Dalles, a city I’ve become quite familiar with since March. From there we head north into Washington, along the Klickitat River Valley into Glenwood with great views of Mt. Adams along the way. Then on day two we go south back to The Dalles, via a scenic route option to the Rowena Curves and eventually to our camp in Dufur. From there we continue south to Tygh Valley, Madras, and Smith Rock before heading back north to The Dalles.

Here’s a visual of route (click to make it bigger): 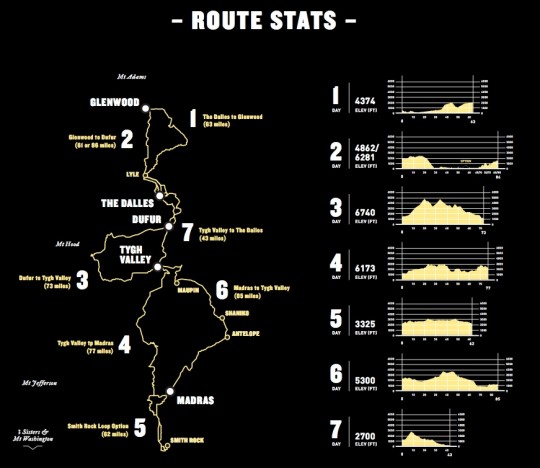 With about 2,200 riders and hundreds of volunteers, staff, vendors, and supporters who travel with the rolling Cycle Oregon City, there should be plenty of stories to share. Unlike in old days where I’d have to run all over heck looking for wi-fi to upload photos and stories at the end of a long day in the saddle (I’ve blogged from some hilarious and remote places on Cycle Oregon over the years), they now have what’s called a “Blogmobile.” I have yet to experience it, but from what I hear it’s an RV outfitted as a media lounge that has an internet connection wherever it’s parked.

I can’t wait to stroll in to the Blogmobile and act like an old wily veteran, telling tales of how I blogged Cycle Oregon way back in 2006!

While out on the road, I plan to share a photo gallery and ride recap each day. I also hope to share other stories from the road. Cycle Oregon is always full of interesting people — both on the actual ride and in the small towns we roll through. Stay tuned!

[Note from our accountant: We would love to feature a special sponsor of all our upcoming Cycle Oregon coverage. If you or your business is interested in that type of partnership, get in touch ASAP!]

Looking forward to the photos! These are great routes to ride and hopefully the weather is perfect for you this time of year (not so much heat or wind).

Just a note about riding the old highway near Rowena these days – since the fire there have been quite a few animals (particularly deer) near and on the roadway. On one ride alone a few weeks ago I had three near-misses, including wild turkeys and a falling rock near the crest kicked off by deer I’d startled. Hopefully they’re back deeper in the woods now that the fire’s been out a while.

J., look forward to your reports. Scratching my head about how you get from Lyle to Rowena, without heading west to Bingen and Hood River, or did Cycle Oregon arrange a bike ferry across the River at Lyle! Enjoy the Klickitat River! and watch out for elk in Glenwood.

Lenny, too bad they didn’t take the Weyerhauser Haul Road through to the Lendl campground. The bike portage(s) are fun..!

What a great route! Can’t wait to read about it here.

No wait! No bikes on the Bingen/Hood River Bridge, so it must be back to The Dalles bridge, then some kind of loop up to Rowena Crest, and then back via 7 Mile HIll? Have a blast!

Yes, you can ride over TD bridge, head west either through town or on the waterfront path, hook a left at the Home Depot and prepare to fry in the sun while climbing Sevenmile. That will only take you down into Mosier though, and that doesn’t look like the route here. I suspect they’re heading south on 197 and looping over and back on White River (48) / Dufur Mill (44). This is the route used by the old Mt. Hood Classic stage, back when it started at Meadows. (Oh and say hi to Jeff & Samantha at the historic Balch Hotel!).