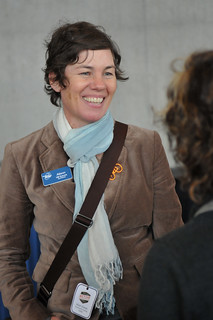 Alison Graves is the new executive director of Cycle Oregon, the Portland-based non-profit organization known for its week-long bike ride.

Graves’ name is familiar to many in local bike advocacy circles given her seven year stint with the Community Cycling Center. Graves stepped down as the CCC’s executive director last March and she is also on the board of the League of American Bicyclists. In May 2013, Graves won an Alice Award from the Bicycle Transportation Alliance for her work in “ushering in a new way of thinking around equity and inclusion for the bicycle movement.” While at the CCC, Graves was best known for her strategic embrace of programs and outreach that sought to break down bicycling’s “color barrier”.

At the CCC, Graves led the organization on a mission to use bicycles as a tool of empowerment for people of color in under-served communities. While the public face of Cycle Oregon is nearly the exact opposite demographic, the lesser-known mission of the organization is actually quite similar. Cycle Oregon, like the CCC, uses bicycling to make a positive impact on people and their communities. In Cycle Oregon’s case, the people impacted are Oregon’s many rural residents who benefit from the ride’s economic boost and from community projects funded through the Cycle Oregon Fund.

That being said, the hiring of Graves marks a significant change for the organization. In a phone interview this morning, Graves, a veteran of several Cycle Oregon rides herself, said her hiring is the beginning of a new era. “For 25 years, Cycle Oregon has been known as a ride organization. Now it’s not going to be just about a ride, but about cultivating community leaders and promoting economic development in the communities we partner with.” 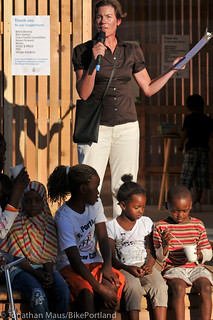 Graves at the opening of the CCC’s
Bike Hub in New Columbia in 2012.

Graves added, “Exposing people who have the time and ability to see parts of Oregon they may otherwise never have an opportunity to see, the idea of helping people to see what’s special about a place, that’s something the CCC did really well but in a different way. In my mind, Cycle Oregon bridges cultural divides… For me, it’s about looking at the problem and the opportunity with different tools and different approaches.”

In a statement, Cycle Oregon touted Graves as the right person to lead the organization into their next 25 years. “Our recent 25th anniversary heralds a time of change and of opportunity,” said Cycle Oregon Board Chair and founder of the organization Jonathan Nicholas. “With the excellent people we have on staff and in our volunteer corps – enhanced now with an experienced executive director – Cycle Oregon is poised to expand its strategic initiatives and even more deeply enrich the communities it serves.”

In many ways, this move is a way for Cycle Oregon to more proactively, and more publicly, put their stamp on something they’ve always done behind the scenes: bike advocacy. Many people might not realize that it was the lobbying and advocacy by former Cycle Oregon executive director Jerry Norquist that led to the creation of Oregon State Parks’ Scenic Bikeways Program and the state’s Share the Road License Plate. Cycle Oregon also has a “Cycle Safe” program that educates school-aged kids about bike safety in places (like Cottage Grove and John Day) where Safe Routes to School programs don’t reach.

Graves began in her new position yesterday and plans to spend her first 90 days developing a new plan for the future.

With Graves at the helm, and a very strong financial footing to work with, the future of Cycle Oregon — and therefore the future of cycling in Oregon — has never looked better.

This is wonderful news, and represents a fantastic step forward for Cycle Oregon and our communities. So lucky to have Alison in this new role!

Congrats Alison! What a great combination!

Congratulations Alison! So excited for what’s next at Cycle Oregon.

I’ll add my voice to the chorus…Congrats Alison! CO made a terrific choice!

Cycle Oregon is getting another Great Leader! Congrats Alison!

What a great fit! Alison will be an awesome leader for Cycle Oregon. I love the vision she and CO are holding for the organization.

Agreed, what a great fit; congrats to both!

Great pick! Congrats to Alison. My advice, leave the Portland bike advocacy to BTA, concentrate on a great ride and helping rural Oregon, that’s why we ride CO.

Vote Up0Vote Down
« New podcast episode: Bikes and the future of skateboarding
Mix of snow, slush and ice make for tricky biking conditions »