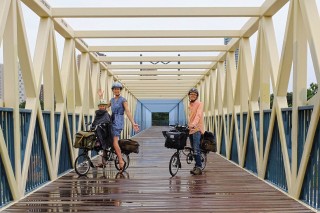 Partly inspired by a visit to Portland last year, a Massachusetts woman has launched “a free travel agency for bike travel” across the United States.

Bikabout.com founder Megan Ramey will host a party at Velo Cult in Portland next week to gather information on the city and invite contributors.

Ramey said in a phone interview Monday that she started referring to Portland as “Graceland” after a 2013 visit with her family. She, her beer-loving husband and their young daughter traveled the city with a copy of Hop in the Saddle, a locally written guide to enjoying Portland breweries by bicycle.

She remembered telling Hop in the Saddle co-author Lucy Burningham that the book “really changed my entire travel planning perspective when I visited Portland for a whole week and could just turn off my brain and do everything you told me to.

Bikabout, she said, will feature similar guides to seeing a city’s sights and bike-friendly businesses on bicycles, including information about:

Ramey charges businesses to be listed on the site and uses affiliate links to get a share of revenue from people who make reservations or purchases after clicking through from her site.

She plans to dedicate 25 percent of the revenue from each city to local bicycle advocacy organizations.

The site’s mission, Ramey said in an interview Monday, is helping “people feeling this amazing thrill of essentially stumbling upon the hidden pockets of cities that you never see unless you biked it. It’s the combination of that happiness and adventure with the economic boost to local businesses that are realized when people see cities by bike.”

She’s certainly looking to serve a growing market, at least in Portland – as we reported last year, hotel visits in Portland has been booming since 2005, but car rentals haven’t.

Ramey is also looking for a few Portlanders to assemble curated bike tours of the city including their favorite local hangouts along the way. She wants about five such tours for each city, and offers $100 for each. You can submit a tour for consideration online.

Bikabout’s Portland party will be Aug. 19, 5:30 pm at Velo Cult, 1969 NE 42nd Avenue. It’s free, but with a suggested $5 donation to the Bicycle Transportation Alliance.

I know that bridge! It’s in Minny app ellis near that big church and the walker.

So, I see you’ve got a kid on the brompton. What’s your device? (can’t see it with the ponchos)