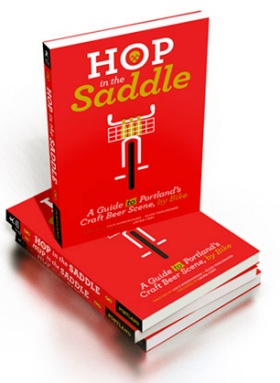 A trio of Portlander women have joined forces to launch Hop in the Saddle, a forthcoming (they hope) guide book that will take readers on a bike tour of local craft beer breweries and pubs. The project launched via Kickstarter today and its supporters are hoping to raise $15,000 to make the book a reality.

Behind the project are: noted author Ellee Thalheimer, whose Cycling Sojourner guide book came out earlier this year; freelance reporter Lucy Burningham, who has written about beer and bikes in The New York Times, Outside, and other national publications; and Laura Cary, a graphic designer based in Portland. (Check bios of all three of them at HopintheSaddle.com.)

Given what I know about these women, this will be an excellent book! Beyond that, one lucky backer of their Kickstarter campaign will get a one-of-kind, custom “beer bike” built by none other than famed local builder Tony Pereira (who happens to be the husband of Mrs. Burningham). All it takes is a donation of $10,000 or more. 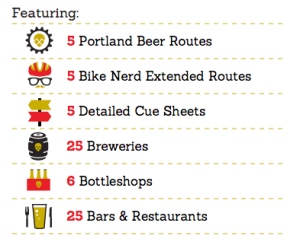 A spokesperson for the books tells me the bike routes between the beer spots are “chosen and cued with taste and precision” and that, “Even people who are new to Portland and have no interest in beer will find the book to be a valuable resource for long and short routes that explore colorful destinations in all five quadrants of the city.” Or vice versa — if you have only a one-track mind for beer; you’ll find some great reviews of Portland’s best beer bars (only places that brew beer on site were included).

Here’s more about the book:

“Hop in the Saddle links the best PDX beer spots with the city’s first-class cycling boulevards and bike-friendly streets. We’ve included all the quirky bike charm and bubbling personality that makes Portland a world-class beer and bike city. Instead of ho-hum ale trail standbys, we’ve picked the spots that have defined a craft brew movement. Think innovative beers, seriously great food and ambiance that won’t quit. Our routes and words are beautifully brought to life by Portland designer Laura Cary. This is one book you’ll be proud to throw down on the bar.”

If the Kickstarter campaign is successful, the book will be released on November 1st. Pre-orders are available now via Powell’s or Amazon.

This is certainly a great idea, and a guidebook that I would be happy to see out there. However, with all due respect, running a kickstarter to fund publishing a book? You can self-publish on Amazon — either digitally or on paper — for $0.

So what are the Kickstarter funds for, “research”?

I’m going to have to agree with this.

I’ll hapily donate the kickstarter campaign ($15 will get you the book which is what I would gladly pay at Powell’s anyway) but it seems like they are creating extra work for themselves here.

I self publish a quarterly arts magazine and for $0.00 you can use print on demand services and still get your book on Amazon with no up front cost and a decent profit for yourself with every book sold. So long as you aren’t printing full color glossy photographs the print quality through such avenues is quite excellent.

More importantly, through print on deman services you can easily offer an e-book version (again, no up front cost to you AND you keep even more of the profit in this format). Given the subject matter of this book, a digital version for your smart phone or tablet would be quite handy!!

But regardless, despite my back seat business suggestions I’m going to go donate now.

I’ve worked in the publishing industry for seventeen years and watched the emergence of Print on Demand technologies and Ebooks. For a book like this, while it would appear to make sense, ebooks are still very fringe—less than 8% of sales. Essentially the difference between Print on Demand and having a basement full of copies is the difference between no one ever having heard of your book and it being available on the shelf for strangers to discover as well as distributors having inventory on hand, etc.

While many tasty beers were surely purchased in the researching of this book, I believe most of the money raised by this Kickstarter campaign is going directly to far more mundane expenses like printing, shipping, producing Kickstarter rewards (provided by local businesses!), fees, and other production costs.

Here’s the inside baseball (warning, long and wonky):

More than even raising startup funds (a great alternative to credit card debt!), Kickstarter affords a major opportunity to get the word out about a book on a large scale before its release and help the right readers find it. It’s also invaluable to simply sell copies in advance, putting a big chunk of books out into the world right away to be used, enjoyed, shown to friends, and to generally let the book promote itself with its own awesomeness. This is all vital in the wild west world that is the publishing industry right now.

I’m not familiar with Hop in the Saddle’s financials, but I suspect that if Kickstarter just gets the authors/publishers close to breaking even on the book, they’ll have been very frugal. Money from any copies sold after its launch will go first to defray further costs, and only then to pay the authors for their work. Worst case scenario is they’ll slowly pay themselves back for their labor; but if they keep making good business decisions then they’ll eventually make a tidy sum — without having to sell every copy by hand the way you do with POD, or give most of them away the way you do with e-books. That’s the risk they chose to take a year ago when they first started investing time and money into the project. And I do hope they do well, not just so the creators are rewarded for their hard work, but because any guide book provides an economic boost for the area it covers. We need that right now.

Based on the strong reception of Ellee’s recent cycle touring guide book, as well as the extremely positive response even the idea of this current book is getting, I suspect this team is on the right track.

Full disclosure — Publicity is one of the many hidden costs of any kind of publishing, even the supposedly $0 down kinds; if you don’t pay someone to do it, you’ll put those hours in yourself. The HITS team has hired me to do publicity for the book; that’s another up-front investment, and I hope one of their smarter ones with the best return.

Incidentally, my rates are very reasonable and yes, I am available for other projects of the variety that combine “bicycling” with “amazing.”

The best bars are those within 1 mile of my house that allow me to drunkenly stumble/walk safely home.

I’m going to guess there’s a disclaimer @ the front of the book not to drink [too much] and ride, right?

Not sure I’m really on board with the merging of bicycling and drinking alcohol, just as I wouldn’t be on board with cars and alcohol.

Why celebrate mixing alcohol and bicycles? I don’t see how drunk riding is a good thing for anyone.

Who said anything about getting drunk?

Well what do you think happens if you ride from bar to bar? Would you support a book about driving from bar to bar? I understand you’re biased towards bikes but alcohol impairment and bicycles are not a good combination. I don’t really see how you could pretend otherwise. Are you suggesting this book is merely about riding from local brewpub to brewpub merely to sightsee and not indulge in the beer itself? I just think it’s a double standard. If it was about driving from pub to pub there’d be outrage amongst cyclists.

I can see how pixelgate could make the jump to those assumptions, as someone who has not seen the book. We have a whole section on how to avoid getting drunk, including tips on eating food, drinking water, and only trying samples. Getting drunk is discouraged, and we provide a wealth of resources (how to take public transportation or taxi with a bike, or hail down a pedi-cab) if you accidentally overindulge. Just like the many guides to wineries out there which cater to motor vehicles, this book is about appreciating, savoring and exploring Portland’s incredibly rich art of craft brewing. We talk about everything from the history and culture of craft brew to advice on tasting beer. It’s going to be awesome. Bicycling aside, there is no guide to Portland’s craft beer scene like this out there. Add in the bikes, well, that’s heaven.