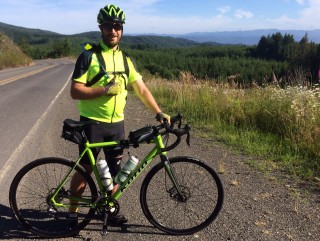 We’ve shared dozens of stolen bike recovery stories here on BikePortland over the years. From an editorial standpoint, I usually don’t like to repeat similar stories; but in these cases I make exceptions. Why? Because I know the despair people feel when their bike gets stolen, and I want to give victims hope. I also feel that given what a huge problem bike theft is in Portland (much larger than you might think), I jump at any excuse to cover the topic.

On that note, here’s the story of reader Joel Brown, who emailed his recovery story to us this morning:

I just wanted to share my story of how I got my bike stolen and then got it back just about a day and half later.

I often drive my bike to work and leave it in my car, which is parked in a downtown parking garage, for after work rides or if I am taking it to the shop.

On Thursday 7/17/2014 I brought my bike to work in order to bring it into the shop, which opened at 10am. I got into work around 7:15 and then went back out around 10am to drive to the shop. When I got to my car I noticed the back window of my Honda CRV was broken and my 2014 Kona Jake the Snake Cyclocross bike was gone.

I immediately filed a police report and called my insurance company.

I took the next day off from work to meet the glass repair company at home to repair my broken rear window.

From the picture, you can see that this model Kona is very a noticeable bike. It is bright green and can be spotted blocks away.

The window was all fixed up by 10am, then around 11:30am I get a text from a coworker with a picture of bike asking if it was mine. He was only 10 blocks from where it had been stolen. 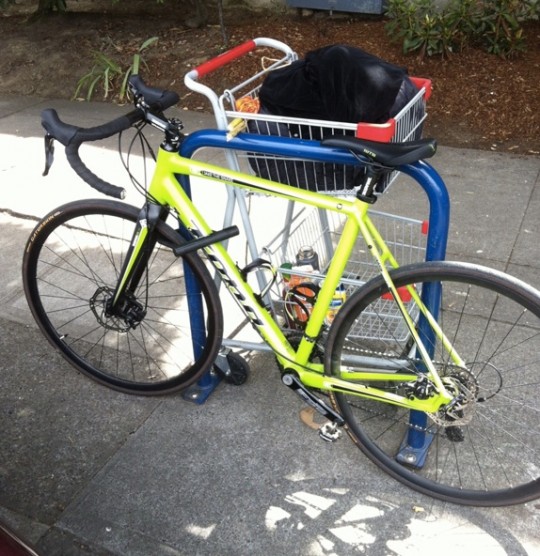 I look at the pic and zoom in on it and see my gatorskin tires and my green bottle cages. There is no doubt in my mind that this is my bike! I started jumping up and down and yelling “That’s by f#$% bike!”

I immediately rushed to meet my coworker (who stayed by my bike) to get it back!

I called the cops, they showed up, filed a report and left. He gave me his card with a case# and my bike’s SN# in order to prove it was mine for a locksmith.

I called a locksmith and waited for a few hours by my bike. Sitting in my car watching it in the rear view mirror.

As I am sitting there, someone comes up and starts to unlock it!

I waited a few seconds, got out of my car and confronted him.

I said “I would like my bike back please”

He didn’t put up much of a fight, he said “oh is that your bike?” I told him it was and showed him a pic of me with the bike. Even told him I had a receipt (which I do) with the SN# of the bike on it.

He unlocked it for me and I put the bike in my car. I asked him where he got it and he said that a homeless person gave it to him as payment for some money he owed him.

I asked if he wanted to wait around for the cops so we could catch the person who stole my bike, but he declined and took off.

Not sure if his story is true or if he was the one who stole it. I wish the person who stole it could have gotten arrested, but I was just glad to get my bike back!

I know not all stolen bike stories end like this, but it is good to know that some do.

Thanks for sharing your story Joel.

And so, as you can see, sometimes there are happy endings to bike theft stories. Sometimes the police do show up and help. Sometimes you get your bike back without much fuss at all. There is hope. Keep the faith and keep looking. Your bike just might turn up.

(And please do yourself a favor and make sure you have proof of ownership in case yours get nabbed next.)

I wonder how long it took for that guy to steal someone else’s bike?

My thougth exactly, this ended well for this particular person, if you call missing a bunch of work and having to deal with/pay for a broken car window ending well, but that guy probably smashed someone else’s window and rode off on their bike within the hour.

I agree. I was in the market for a fancy new bike a few years back when someone stole the bike I wanted to replace. The bike they stole was literally worth less than the lock they cut! Anyway, when I replaced it, I certainly was no longer interested in getting anything expensive. That one theft alone completely changed my willingness to buy expensive bikes. I can totally understand someone else saying to themselves “screw this, I’m done biking”.

Re: Rampant bike theft in Portland. The other day I saw yet another bike locked up with a cable lock, using a u-lock merely as a padlock. Yup, a big heavy u-lock, lugged around only to be used to lock the cable.

As former bike shop employee, I can’t even begin to count how many bikes I sold as replacements. Without a doubt most of the stolen bikes had been locked with a cable lock. My totally unscientific analysis was that the #1 stolen bike was one locked up on a front porch with a cable lock. You might as well post a sign reading, “free bike, just cut cable.”

Bikes left in cars, as this story illustrates, don’t do too well either.

If everyone used a U-lock properly, bike theft would drop immensely. It’s sounds like keeping your bike in a lock car is also a bad idea, because tweakers are brazen folks. Speaking of which, did that Moots MTB that was stolen by gutterpunks ever surface?

Could you have called the police to come and arrest him for possession of stolen property? Taken his picture. You and your friend detaining him until they came? Another suggestion would have been to put your own u-lock on the bike to prevent the guy from unlocking his lock and riding off on it which fortunately he didn’t do.

the insurance company also lost money on this deal, having to pay for the car window. What is their interest in finding the culprit?

No his story isn’t true or he would be angry about being out the money he paid for the bike. He knew damned well it was stolen or else he stole it himself.

Congrats on getting your bike back.

I’d be interested in a BP story(ies) on how much bike theft there is in Portland, what areas are worst for theft, what kind of bikes are most likely to be stolen, how many bikes are recovered, what locks were used on the stolen bikes, what is recommended for locks and locking technique, etc.

I don’t think I would have handled the “recovery” in quite the same way. In case the new returning “owner” appeared to be someone you didn’t want to confront, it might have been wise to put your own U-lock on the bike until the locksmith arrived, or remove the rear wheel at least. This would also allow you time to take a photo of the thief/receiver of stolen property.
This is a particularly heinous crime when the bike is the victim’s sole means of transportation. Scumbags!

I didn’t think of the option of using my own lock, that is a good idea. I didn’t have much time to think about things when my friend discovered my bike. I pretty much just rushed right there.

I would have LOVED to have the cops there when he showed up. But detaining someone until they come is easier said than done. When I initially called the cops, they took around 40 min to show up.
I was glad to get it back without any physical confrontation.

Had my brand new shiny bike stolen a week after I got it…from a “secure” area in the Big Pink where I work. It’s a gated underground parking garage with an attendant (or three), plus video cameras all over the place. The bike parking area is open but kind of hidden. I had (doh) used a cable lock—lulled into thinking that a “secure” semi-secret area w/ several attendants on hand and video cameras and all was, indeed, secure. When I reported the theft, Security helpfully showed me a video of the thief riding my bike out of the garage. The end. “Sorry–nothing we can do.” Anyway—learned my lesson. I now lock my bike up in one of the truly secure, card-accessed locked rooms (for which I pay rent). And I never use a cable lock! And I don’t keep shiny things shiny.

you had me at “drive my bike to work”

I really wish the owner had surreptitiously snapped a photo of the possible thief. This story has the ring of familiarity from another high-end bike stolen from a car parked during office hours in a downtown office parking lot recently –

If it was the same thieves, it would have been great to get them.

Also: we need to stop making it so easy for bike thieves! Never leave your bike in your car.

Would you leave your $2000 laptop sitting on the rear seat in a parking lot?

Then why would you ever leave your bike?

Especially not without a u-lock through the frame and each wheel, to prevent the thief riding the bike away after smashing the window.

Just wanted to jump in here with a link or two re: this post ad bike self-recovery. Low power bluetooth tracking device folks thetrackr.com have been pushing their product as a bike theft solution very very hard – so far as to post this video where they track down a planted/stolen bike using the product.

They then reclaim the bike and mention “no need to call the police” – This spawned some interesting commentary from law enforcement, i.e. https://twitter.com/endico/status/491305427842244608

Either way, the promise of this kind of tracking network and an easily hideable tracker (quarter sized, 5months battery) for bikes raises a lot of hope. It also raises a lot of questions about what to do when you’ve just tracked the person with your stolen bike.

And p.s. I promise to have BikePortland’s stolen bike listings back up soon. 🙂

Why do bike riders still buy cable locks? “Cheaper”, “Easier to carry”, “Don’t need a key”, I sold them at rei for ten years and told everyone who bought one they wouldn’t keep their bike from getting stolen, a u lock was the only reliable option.

This bike was cursed. Exactly a month to the day after it go stolen I got hit by a car. I was fine, but the bike was not. Insurance got me a new 2015 Kona Jake the Snake and it has been great so far!