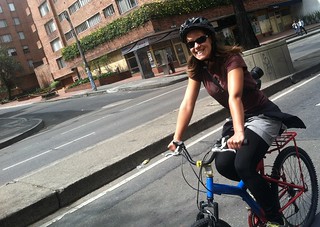 Portland resident Jen Sotolongo and her partner Dave Hoch recently returned from a trip to Bogotá, Colombia where they took part in “Ciclovía” — the event inspired our own Sunday Parkways and that’s considered the Godfather of open streets events around the world.

Story and photos by Jen Sotolongo

We awoke from our short morning nap after a sickeningly bouncy, seven-hour night bus ride from San Gil, Colombia to Bogotá, feeling somewhat less nauseous, a touch more rested, and most of all, ready to take to the streets of Bogotá for Ciclovía.


Every Sunday and holiday from 7AM until 2PM, the city opens over 70 miles worth of roads… Think Sunday Parkways, only the whole city, rather than single quadrants… Every. Single. Week. All year round.

Every Sunday and holiday from 7AM until 2PM, the city opens over 70 miles worth of roads, including major thoroughfares, to bicycles, runners, and a surprising amount of inline skaters only. This weekly event attracts some 2 million people, or about 30% of the population. Think Sunday Parkways, only the whole city, rather than single quadrants, dedicates its roads to cyclists and pedestrians. Naito, Burnside, MLK, Powell Blvd, Barbur, 82nd, and the Fremont Bridge become a safe haven for active transportation. Every. Single. Week. All year round. 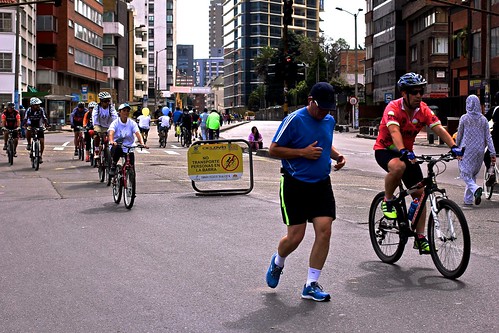 Launched as a pilot program in 1976, Bogotá has hosted the longest-running and largest Ciclovía in the world. The event increasingly grew, particularly during the 1990s when Mayor Enrique Peñalosa and his brother, Guillermo Peñalosa, Parks Director, decided that Bogotá would become a city for the people.

Mayor from 1998-2001, Peñalosa famously overhauled the streets of Bogotá and created more than 350km of protected “ciclorutas,” bike lanes completely separated from traffic, advocating that cities should be designed for people, not for cars. A matter of social justice and equality, he set out to demonstrate the bikeway as “a symbol that shows that a citizen on a $30 bicycle is equally important as a citizen on a $30,000 car.”

After peeling ourselves from our comfortable bed, we lugged the heavy, completely-out-of-tune bikes left for our use by our AirBnB hosts and headed down a few blocks to Carerra 7, a six-lane traffic route that also has a buffered lane for cyclists down one side. At 8:30 in the morning, the streets were completely packed with cyclists (and their dogs!), inline skaters, runners, vendors, and pedestrians.

We cycled past city parks, city-commissioned political murals, the strange ritzy neighborhood with U.S. chain stores, and along the city’s ciclorutas. Perhaps the most exciting moment along the ride was joining a large crowd of excited Colombians, watching their own Nairo Quintana win the Giro d’Italia on a giant video screen. If you didn’t follow the Giro, Colombians dominated the race, taking first, second, and King of the Mountain. In a country where the cyclists are just beginning to emerge as elite athletes, the pride was imminent throughout the ride. 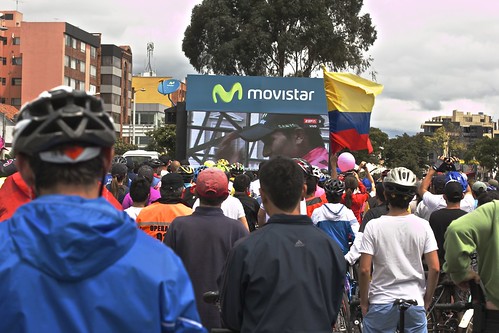 By the time we finished our ride, it was well into the afternoon. Carrera 7 was chock a block with people and vendors and guinea pig races. The scene was chaotic and we traveled slowly as we made our way through the crowd back to our AirBnB. The festivities continued throughout the day because, as luck would have it, the following day was a holiday, and we were awarded with another day on our bikes through the streets of Bogotá.

An early flight from Bogotá to the Caribbean Coast the morning after our arrival in Colombia reminded me a bit of Portland. The skies were gray, with a light rain misting the ground. Cyclists peppered the scene donning rain gear, helmets, and panniers on their way to work. Bus stops housed giant bicycle cages that held hundreds of bikes for multi-modal commuters. Morning runners were out with their dogs on leashes. People were outside getting exercise, something I’ve seen infrequently during my extensive time spent in Latin America. 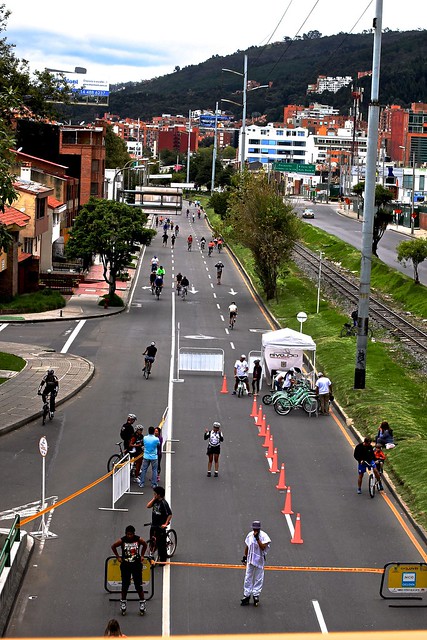 Ciclovía is more than just about creating an opportunity to encourage physical activity and active transportation, however. It connects some of the wealthiest neighborhoods to the poorest. Corporate executives mounted on bikes worth thousands of dollars ride alongside the minimum-wage earner on a bike that costs just a few. Hundreds of thousands of people gather together every Sunday of the year as part of a single community. From the hours of 7AM to 2PM in Bogotá, all citizens are equal.

In 2013, Sunday Parkways attracted 85,480 participants over the entire series (with the SW September ride cancelled due to inclement weather conditions). Like Sunday Parkways, Ciclovía started out small, with just 15km of closed roads. By using existing infrastructure, an army of dedicated volunteers and proper management, little capital investment was needed to expand Ciclovía into what it is today. With Portland’s already strong community, dedicated recreationists, and grassroots ethos, Sunday Parkways certainly has the capability to expand and rival Ciclovía.

One thing I’ve always found perplexing is the large tab for our Sunday Parkways. We’ve discussed this here before – police overtime, barricades, etc. Not to mention the wringing of hands by City Council about how this is too expensive, etc. If Bogota does this every weekend, I’m guessing they figured out a way to skip all or most of the expense we saddle ourselves with. What’s the ticket?

Bogota uses volunteers for many intersections, and fewer police.
Also, instead of using neighborhood side-streets, Ciclovia uses the major expressways thru the city (as can be seen in the photo above), which have fewer intersections and are much wider than our routes.
We don’t have many expressway-like roads in central Portland; Columbia Blvd and SW Barbur thru the hills would be somewhat comparable, but are not really the same.

In late 1973 Germany did this, freeways included: every street and road. It was called Autofreier Sonntag, Carfree Sunday. It was a country-wide rule, which I think obviated the need for barricades and all that jazz.

I should have said West Germany. I’m not sure what they did in the East, but I don’t think there was a comparable effort.

I live in colombia and am a full advocate for ciclovia for the once-a-monthers to get outside a bit. Although wonderful for beginners, families, and some dogs, it has become dangerous because there are few guidelines or rules to follow, robberies, and accidents. Most Serious riders, runners, and rollrbladers stay far away from ciclovia.

I also believe it works well in colombia because the cities shut down on sunday. Many stores do not open early on sundays if at all, lunch in colombia is around 1 PM, so citizens have an entire morning to go and enjoy the weather. Sunday is, in all sense of the word, a day to rest completely in colombia.

If im not mistaken, autofreier sonntag started as a way of helping ration fuel in west germany during the 70s, and was lifted after the energy crises subsided a bit.

“autofreier sonntag started as a way of helping ration fuel in west germany during the 70s, and was lifted after the energy crises subsided a bit.”

Well it certainly was inspired by the gasoline panic of late ’73. But the decision to experiment with closing the country to cars for a day (once a month) was something that any country could have opted to try. Germany had no greater *shortage* of fuel than most other countries in those days. Of course, lots of measures were lifted in probably every country in the world once the price of gasoline dropped again, or people discovered that the world did not end with the Arab Oil Embargo. We here in the US, for instance, gave up on our 55mph NMSL, stopped buying smaller cars, redefined carpooling downwards to mean just one passenger, etc.

Btw, 30% of the population using the ciclovia in bogota sounds a bit exaggerated. Not saying the writers are wrong, but the figures that are used might be skewed.

This may be an exaggeration, but it is feasible.

With over 70 miles of large streets and expressways opened up for bikes and pedestrians for half a day, there only needs to be an average of 2000 one-way trips per mile every hour, or 35 per direction every minute, to reach 2 million people. Most of the streets have 2 cars lanes in each direction, so that means a person would pass by every 4 seconds in each lane: very busy but feasible. And if half the visitors are walking, there would be plenty of room for 1 million bike trips.

I’ve seen several ranges for participant numbers, from 600,000 to 2 million, and saw 2 million most frequently. I suspect several of those participants also include folks who stick to the park events like dancing, yoga, and aerobics. Either way, the streets were packed throughout the day!

As far as how they pull this off every week, there is a very competitive volunteer recruitment process. We had a local map while we were there that said it was something like 1 out of every 400 applicants were selected to volunteer. Now that is definitely an exaggerated number, and I didn’t keep the map for the actual number, but the point is that it’s an in demand position and the volunteers take their jobs very seriously!

Does Bogota close to cars during Sunday Parkways, or are cars allowed to use any other streets except those used for Ciclovia? If the latter, is one of the roles of volunteers to conduct traffic so that cars can cross the closed routes?

I’m thinking that this could work here, even with arterials closed, as long as there is a way to allow cross traffic to get past the closed routes. Our city obviously doesn’t shut down completely on Sundays (brunch!), so as long as a way could be found to allow automobiles to still get from point A to point B, even if it involved detours, I think this could work here — yes, citywide — yes, weekly.

Maybe part of the expense would be to purchase uniforms for volunteers, train them and certify them to safely manage traffic, and mostly let the event be volunteer-run (with some limited staff and official supervision). Perhaps, with this recipe, weekly city-wide events could be had for the same expense as our current five/six annual events?

I think it’s a great idea, anyways. Let’s make it happen! If I’m ever mayor and it hasn’t happened by then, I will make it so… 🙂

“In a country where the cyclists are just beginning to emerge as elite athletes, the pride was imminent throughout the ride.”

What?? Colombia has been producing elite cyclist for decades!
Here, just to name a few:

Did you notice the impressive mountains when you were there? That’s the reason why Colombian cyclists are such good climber.