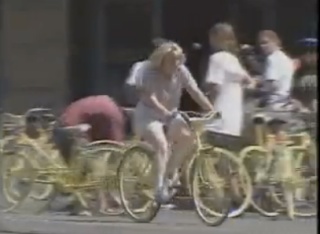 Still from video of Portland’s Yellow Bike program.
(Via LostOregon.org)

The Yellow Bike program (Wikipedia) was Portland’s innovative experiment in community bike sharing that was launched in 1994. These days it’s often brought up in the same breath with our more modern attempt at bike-sharing; but as you can see in the short video below, the Yellow Bike program was decidedly low-tech and had almost nothing in common with today’s systems.

With the help of volunteers at the Community Cycling Center, the Yellow Bike program consisted of hundreds of cheap city bikes that were simply painted yellow and set out for public use along with a sign that read: “Free community bike. Please return to a major street for others to reuse. Use at your own risk.” It was a classic example of what The New York Times referred to in December 1994 as Portland’s “urban whimsy.”

The video, part of the “American Promise” educational series developed by Farmer’s Insurance as a community involvement gesture, offers an in-depth description of the program thanks to an interview with the program’s founder, Tom O’Keefe.

The Yellow Bike program is usually dismissed as a quaint, yet inherently flawed and failed attempt (the bikes were eventually all lost and vandalized) at getting more people to ride bikes. However, in light of Portland’s embarrassing inability to launch a modern-day bike sharing system, it deserves respect for actually getting get off the ground.

When this video was shared on the Shift email list today, someone called the program “rad and inspiring.” “I wonder if we could have a modular system,” they wondered, “and pay for it a little at a time, rather than all at once? It sucks to have to wait around for a million dollars to fall out of the sky before we can have certain things. Anyone have a sustainable bike share plan we can implement $100 at a time?”

Wouldn’t it be something if, after all these years, and all the delays of Portland Bike Share, it’s the 20-year-old Yellow Bike program that ends up finally inspires us to act?

The intent was good here. As usual too bad tweakers and other low-lifes ruined it for everybody.

Fond memories! When I bought my little rundown house in Sabin in 1995, the rotting garage, which the terms of my first-ever mortgage required the seller to tear down, contained one of the yellow bikes. I believe it wound up, sadly, in a dumpster. Fifteen years later–same house, still no garage–I went all-bike myself.

The Yellow Bikes were one of those beautiful, good, optimistic ideas that Portland seems to have outgrown. I’d like to see us recapture some of that 90s spirit.

Yeah, I rode one of those yellow bikes once, I think from NW Portland down to City Hall. It was great for the little while that it lasted, and it really was the pre-cursor to modern bicycle sharing systems. Everything they have implemented is based on lessons learned from the original yellow bike program — that you need stations all over the place, so people can ride from a station near an origin to a station near a destination; that the stations must be secure; that the bikes must be bombproof; etc…

It was breathing its last gasps of air when I arrived in Portland circa 1999. I recommend we leave it to the happy fuzzy feel good rose coloured memory…

It was very hippy dippy…catch and release bike share Gen 1.1…think CCC with volunteer repair labor but with less control over spare parts and repair quality, no real budget…and the tire casings were filled with second hand air compressor tubing to make them run flat free! The PDX Yellow Bikes I tried to ride rode like crap and did not stay operable longer then 24 hours. I doubt Portlanders of today would accept this quality of a program.

One thing is for sure…it would be even more difficult to attempt to logically run a similar system today now that the vast bottomless supply of over built 1970s bikes are either gone or no longer “free” (unless someone systematically scoured the mid-west/ Texas garage sales).

Quite a fascinating story. Thanks Jonathan.

Those helmet-less freaks!
The dude climbing on top of the bikes in storage is exceptionally rad.
Maybe time to track some of these people down and do an interview?
Thanks for sharing the footage with us, truly enjoyable.

I wonder how it’d fare these days…

was carless
Reply to  K'Tesh

Craigslist would be filled with ads like “Amazing almost-new vintage cruiser for sale. Lovingly cared for and garaged for the past 10 years, now on sale for a low price of $325! Meet behind Fred Meyers, bring cash only. And no cops.”

I participated in the second iteration of YB. It died and rose again. Halelulah.
It was my gateway drug into the second half of my life. I initially started by taking my 10 year old son there for some ‘dad-son’ time. Something more calm than high powered weaponry or motocross racing. I met some interesting folks, and some really stellar ones. YB challenged what I understood and what I stood for. While I am less a cyclist than I was initially post-YB, YB laid a great groundwork for me. How does THAT fit in the calculus?
yeah, it was goofy dreaming. In the best way possible.

I rode a couple yellowbikes when I was in high school. Yeah, they weren’t the highest performing bikes, but that just made you ride slower/safer. I saw more than one being thrown into the river by bridge and tunnel knuckleheads. When I started at the CCC they had an off-site warehouse on MLK/Killingsworth that was full of them (some yet to be painted yellow). They ended up getting stripped for the parts for the CCC to sell to Resource Reivival and the rest were scrapped.

Dreamers, all of them.

Dreamers are what makes the world go round.

Not all dreams come to long-term fruition, but the Yellow Bikes put bikes on Portland’s civic mental map, and likely contributed to the early success of infrastructure improvements around the same time.

was carless
Reply to  Ted Buehler

Wait, I thought the world went ’round because of the doers?

Alan 1.0
Reply to  was carless

You must be dreaming.

every once in a while I will see one and get all excited about the Portland of yore, but inevitably it will be gone before I can grab my camera.

I came here to say just that, every so once in a blue moon, you spot one of these beasts.

Given the market for resale bikes in this city, it’s not surprising that I haven’t seen one in a few years now.

I was here, I remember it. At the time it worked. It worked because there was nothing else like it before that in Portland.

There is one similar system that currently works, Burningman. The annual week long festival uses this model, and has community bikes available. It is different, in that it is only one week, and they have some volunteers who make the bikes all run. But it does work, and it can be used as a model to learn from and expand.

They were trying this in Arcata (Humboldt County, Northern California) when I lived there, in the early 2000s. The bikes were stolen, stripped, etc. Sad.

We enjoyed watching the old video archive footage of the Yellow Bike Program! Thanks to Lost Oregon for digging that up.

I have posted a transcript of the video footage over on our blog along with a couple of old photos:

I actually found and rode one of those yellow bikes as late as 2008, but it was a rarity at the time.

That program, started by myself and others in 1998, is easily the longest running public bike program in North America.

There’s not a lot of bikes in the program, and they keep disappearing for the usual reasons, but they do stay around long enough to get some use because all are locked with same-keyed locks. If you join the organization, you get a key.

The big bonus of the program, over the years, is the weekly repair nights, where a couple hundred people each year learn how to do basic repairs on bikes, without the stress of needing to finish the repair, or even get it right, before going home.

The funding came from the university, who was mandated by the city to reduce auto trips to campus (in 1996 or so), and part of the mandate was to try to start a “yellow bike program” like Portland’s.

Thanks, 1990s Portlanders, for the effort and inspiration.

Here is the actual text in the UBC “Official Community Plan” which provided seed and ongoing funding for the Purple and Yellow Bikes
http://www.metrovancouver.org/planning/development/strategy/REgional%20Context%20Statements/OCP-for-UBC-November2005.pdf

The GRVD (equivalent of Metro in Portland) wanted a the university to have a public bike system like Portland’s Yellow Bike Program. So they put it in the university’s development plan as a mechanism to improve internal circulation on campus, and it’s been going for 16 years now. Thanks, Portlanders!

Watching that video was great but why did it give me the same vibe I get when I see archived footage of Oregon about the time of Rajneeshpuram? 1994 seems so much like yesterday it is scary!

When bikes hate starts up here, it would be cool if the bikes were yellow. As a nod to the past. But I suppose they will actually be whatever color the sponsor wants.

Six years after this, inspired by Portland’s program and the others it spawned, the college I attended in Vermont launched a student-organized Yellow Bike program. Sure, those bikes ended up in snowbanks, creeks, and scrap heaps, but by the time the program itself was scrapped, the school had more bike racks, more students riding bikes, and a student-run bike coop — all easily attributable to the yellow bike program.

So: those who mock this program for its optimism and short life are really missing the point. It had long-term effects here and elsewhere.

Proud to say that I rode one in ’94, despite the bum tire. Today we would brand the yellow bike program as ‘tactical bike urbanism’

I remember an earlier program in the mid ’70’s in Amsterdam. The bikes were white. IIRC, the police tended to impound them for “blocking the right of way” when parked. Still a good idea.