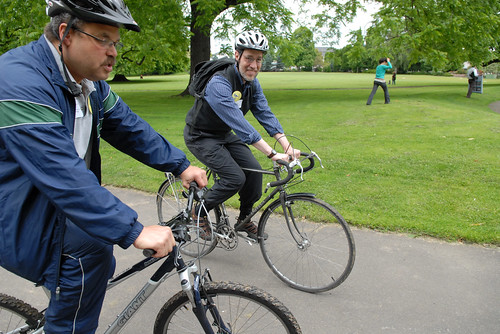 Saying that a window of opportunity is opening for the Oregon Department of Transportation to make Portland’s 82nd Avenue a better place, State Sen. Michael Dembrow is urging people to attend two events this summer.

“I’ve been working on various issues related to 82nd since I was first elected, and now a path to addressing these issues in a more comprehensive way is opening up.,” Dembrow wrote in an email this week. “Neighborhood leaders have convened a group to bring together businesses and community leaders, neighbors and neighborhood associations to create a unified voice for change along 82nd Ave. The 82nd Ave. Improvement Coalition has been meeting regularly since the beginning of this year, and I’ve been able to attend several of their meetings. Things are now really picking up steam.”

“ODOT has identified some money to conduct a study of potential options for improving 82nd Ave., but they need broad community participation in order to make this process a success,” Dembrow writes. “While the planning process won’t begin in earnest until early 2015, ODOT will be collecting feedback starting now to help guide and inform the scope of the planning. It’s really important that neighbors weigh in.”

The second event Dembrow mentions in his email is his own sixth annual “town hall on two wheels,” which this year will be Saturday, July 26 at 10 a.m. at the Lumberyard Indoor Bike Park, 2700 NE 82nd Ave.

“This year’s ride will feature a number of stops focusing on 82nd Ave., and it will be a unique way for us to look at the corridor, since most of us usually experience 82nd Ave. at 35 mph in our car,” Dembrow writes. “(Don’t worry, we won’t be biking on 82nd itself.)”

Because that would be ludicrous.

I can’t wait to see the new walls that ODOT will build on 82nd.

That’s what the meeting’s for, isn’t it?

It sounds like you’d prefer that they make up their mind on what they want to do, and then have some meetings to sell it to the public?

ODOT has a history of “listening” and then picking whatever solution in no way impedes the flow of motor vehicles on 82nd regardless of public input like in the case of the giant ugly wall they put up near the max stop because a signalized crossing might slow down the flow of cars.

And members of the public have a history of showing up once, giving their opinion, and then being angry when the project isn’t immediately built to their exact specifications.

Like it or not, you’d better be engaged for the long haul if you’re going to fix a street like 82nd Ave.

Having an organized group like the 82nd Ave Coalition and powerful allies like Senator Dembrow is a great start but there’s going to have to be a lot of meetings and citizen advocacy before anything moves forward.

If you let your cynicism stop you from participating in all of that –we’re talking years here –then it probably won’t turn out they way you’d like it to.

That’s what the meeting’s for, isn’t it?
It sounds like you’d prefer that they make up their mind on what they want to do, and then have some meetings to sell it to the public?
Recommended 3

Why not? Worked well for your little crew on Foster!

Foster advocacy was rock solid, but anyone who thinks a 3-lane Foster was a predetermined outcome hasn’t been paying attention.

Great to see potential progress here, but yes kind of sad (if understandable) to have a two wheel town hall where the focus of the meeting is a street where it must be prefaced with: “Don’t worry, we won’t be biking on 82nd itself” 😉

If heretofore impregnable fortresses of car culture such as Foster Ave can change though as appears immanent, perhaps redeeming 82nd isn’t such an impossible dream and I’m encouraged – so kudos to Sen. Denbrow.

Please! It’s “82nd ave, Avenue of Roses” or “Oregon Route 213” and there are plenty worse roads to ride. OR 213 has good sight lines, lots of family friendly hang outs, multiculturalisms, modern pavement, some side walks, schools, parks, quaint stores selling colorful imported things. You will be honked at.

They should just attempt to rebuild and repave, that’s the obvious fix that doesn’t need a meeting. JUST DO IT!

Who would ever want to ride on 82nd?

I don’t like it, but my solution to riding 82nd so far is ,,sidewalks
(and many times they suck too) … usually just divert over to 205 MUP. (which can be some distance from 82nd, in places)

You must be thinking 92nd, because 82nd doesn’t have bike lanes.

I wasn’t talking about the bike lanes, which it has at the southern end near Clackamas… I was talking about the additional multi-vehicle lane the entire length through Portland… I ride slowly in my own right lane and people just change lanes to go around me in the left…

But at 35 MPH (closer to 40), once distracted driver and you’re toast. With jam.

do you really have to threaten me with becoming “toast…with jam” because i do not cycle the way you do? imo, your comment was just as uninformed and insulting as a VCer telling a more cautious cyclist that riding in a bike lane could result in their being crushed to death by a truck.

Threaten? Let’s just have a discussion, shall we?

82nd in portland does not have bike lanes…but 82nd in clackamas does.

Yes, I was going to say this. They start south of King Rd.

82nd in Portland is about 56 feet wide (curb to curb) with two auto lanes in each direction and a center turn lane. Structures are built within 7 to 10 feet of the curb. South of Portland, 82nd is 70 to 80 ft curb to curb with lots of big box and parking lots fronting the right of way.

paikiala
You must be thinking 92nd, because 82nd doesn’t have bike lanes.
Recommended 0

82nd has OK lanes from CTC to King Rd.

paikiala
Structures are built within 7 to 10 feet of the curb. .
Recommended 1

I know of 2 structures (just North of Johnson Creek Blvd – Fred Meyer) that come within 3 feet of the curb. Only 1 person can walk those passages at a time.

That area is a mess, and probably is a violation of the ADA, among other things. The problem there is that you’re in the no-man’s land along the county border and neither side takes any responsibility for it.

Fixing that area is better coordination with planners from Clackamas County.

I don’t remember exactly where… but certainly within a handful of blocks of Johnson Creek Blvd… there’s a fence within a few feet of the curb. Has the same one person wide no room to pass problem.

Yes, I’ve tried to get a bike trailer by there on the sidewalk a couple of times. Not fun!

your little crew on Foster!

If by my “little crew” you mean the vast majority of people who live, work and own businesses in the area, then yes –it IS starting to work out.

The select “Coalition” came up with their preferences well before the process started – everything after was a sales job to the public.

The truth is a great sales pitch.

That really depends on who is deciding what’s the “truth” and what’s just “naysayers”.

Have there been any developments on this front?

Sort of. I spent a long time this spring trying to figure out what the deal was with this mysterious sentence in SB 1502, a proposed state bill that passed the Senate but was killed late in the session for what I’m told were unrelated reasons: “No later than October 31, 2014, Multnomah County, Washington County and the Department of Transportation shall negotiate for the transfer of jurisdiction of Cornelius Pass Road from the counties to the department in return for the transfer from the department to the counties of jurisdiction of state highways that are located in Multnomah and Washington Counties and that no longer serve a statewide purpose.”

I couldn’t find anyone who knew where the second half of that sentence came from, or at least anyone who was willing to admit that they did. Couldn’t find enough to make a solid article of it after the fact. I’ll definitely be watching for this language to reappear as the longer 2015 session, which is likely to include a big transportation bill, comes together.

I feel like that provision was someone’s half baked attempt to move the Westside Bypass forward by making Cornelius Pass Road a state highway corridor. Not a trade I’d want to make. But definitely watch for it again.

Maybe, though both ODOT and Sen. Betsey Johnson said that Johnson’s main concern was getting money for changes to CP Road south of U.S. 30; the state is “the one who has all the money” and Johnson said the statistics show that it’s a very crash-prone stretch of road. She also said it’s an unfit freeway alignment because of all the hills and turns. Johnson said she was the one who asked for the first half of that sentence, for this reason.

She said she wasn’t aware of the origin of the second half of the sentence, and referred me to Rep. Shemia Fagan. Fagan’s chief of staff said he wasn’t aware of it either. I also tried the city’s lobbyist, the BTA and 1000 Friends for info. No dice.

Traditionally, Portland, like other jurisdictions, does not want to assume authority for a state highway in their jurisdiction until it is improved, or unless it comes with the funding to make such improvements. The State doesn’t usually have the money, and is unlikely to spend large sums frequently on a single part of the state, which is what might be needed for transfers to Portland, so we wait.
I think this is short sighted. Transfer of Barbur to Portland could result in a road diet and buffered bike lanes by the end of the year. The Concord/Fenwick greenway crossing at Lombard was held up for similar reasons (money/design standards).