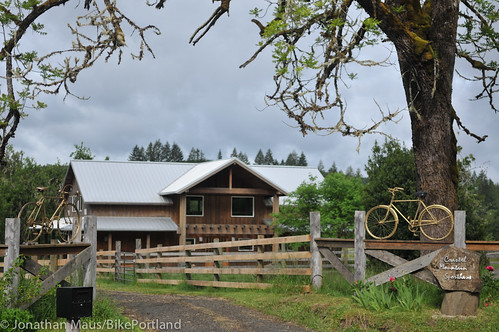 Nestled between the forest and the Nehalem River, the Coastal Mountain Sport Haus awaits bike-loving guests.
(Photos by J Maus/BikePortland)

Remember when I did some exploring in Columbia County a few months ago? That ride convinced me there was a lot more riding out here waiting to be discovered. So, as promised, I’ve come back for more. 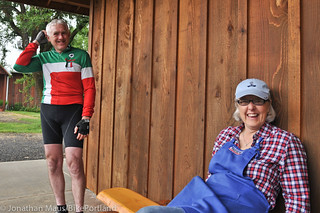 On Friday I rode from Portland out to Vernonia via the Banks-Vernonia Trail (route). My destination was the Coastal Mountain Sporthaus, a guest lodge a few miles out of downtown Vernonia on Nehalem Highway. I first heard about the Sporthaus several years ago when one of the proprietors, Sandy Crinklaw, emailed to let me know they were open for business — and that they catered especially to bicycle riding customers. It’s taken a while, but I was finally able to get out here and see the place for myself.

With its two, gold-painted bicycles that adorn the entrance, the Sporthaus is instantly welcoming to bike lovers. Recognized by Travel Oregon as an official “Bike Friendly Business,” a respect for bicycling goes way beyond just a marketing ploy here. Both Sandy and her husband Glen are enthusiastic riders. The lodge is filled inside and out with bicycle-inspired decor, including my favorite: The gorgeous, celeste-green, all-original, 1980s Bianchi that sits on a large shelf in the main stairway. 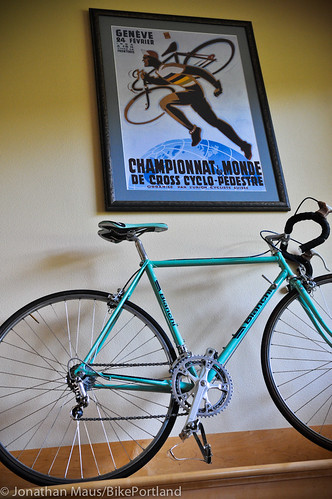 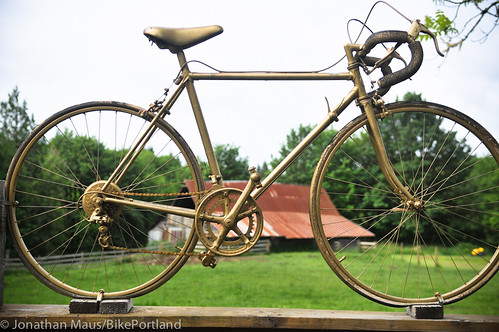 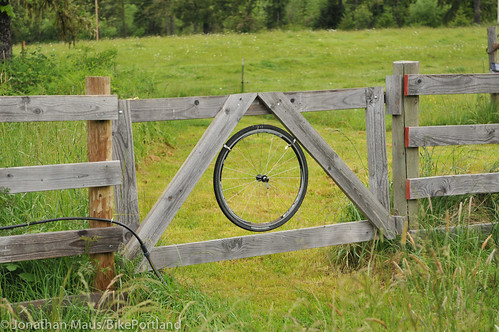 The Crinklaws are Oregon natives who moved from Hillsboro in 2006 to build and operate the Sporthaus. Sandy grew up in Vernonia and her family has owned this property for three generations. The 100 acres that the lodge sits on today was purchased by her grandfather, Wilhelm Wolf, in 1938. Willy worked in a shipyard in Portland before purchasing 500 acres of land on the Nehalem river to start a farm. The area had been decimated by the “heavy cut” — a logging binge that decimated the entire region. “All this was a stump ranch,” Glen shared as he looked over what is now a lush pasture, “it was sold for pennies on the dollar just to get rid of it.” 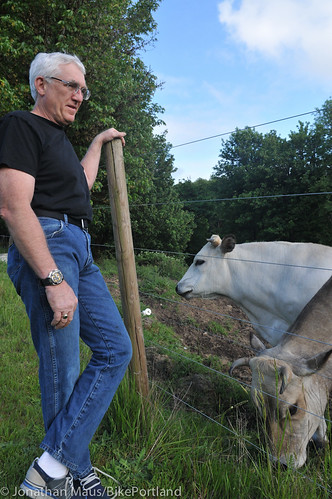 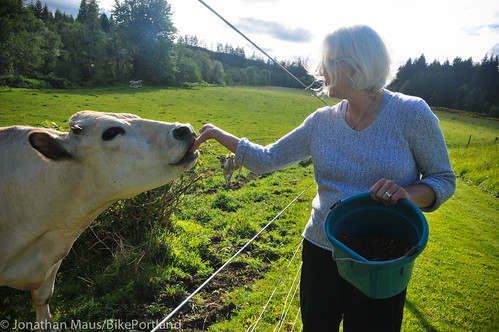 After Sandy graduated from Vernonia High, she went off to college at Oregon State and her mom re-married and moved away (her father died when she was young). That left the family property sitting abandoned for several decades.

Sandy and Glen met while working for a utility company in Yakima, Washington. Yearning for the green hills of their home state, they returned to Oregon and eventually settled in Forest Grove. Before starting the Sport Haus, Glen spent 20 years working for the City of Hillsboro parks department and Sandy worked in development for several non-profits.

In the early 2000s, Sandy and Glen were living in Hillsboro and they both had good jobs and comfortable lives. But they were also self-described, “frayed-at-the-end suburb dwellers” who knew their quality of life could be better. Seeking to start a new chapter and return to a slower pace, their minds began to wander back to Sandy’s family property in Vernonia. “We reached a crossroads moment with the property,” is how Glen described it. Then, in 2006, they took to take a cycling vacation to Italy. That trip changed their lives.

The experience they had as guests of a cycling-oriented lodge in Italy was their inspiration for the Sport Haus.

What started as a leap of faith has now become a successful business. Now in their fifth year as innkeepers, the Crinklaws have welcomed guests from all over the country. While bicycling is in the air around here, it’s certainly not required. While I’ve had some fantastic rides (stay tuned for recaps and photos), I’ve also enjoyed just hanging around the lodge. I’ve spent quality time with the 11 Piedmontese cows the Crinklaws refer to as their family (one of whom they named “Pina,” short for famous Italian bicycle maker Pinarello); I’ve dipped in the “hillbilly hot-tub” (a fire suppression water vault Glen converted into a heated soaking pool); and I’ve enjoyed some amazing food thanks to Sandy’s expert skills in the kitchen (she makes a mouth-watering crème brûlée, and a tasty green onion and orange risotto). 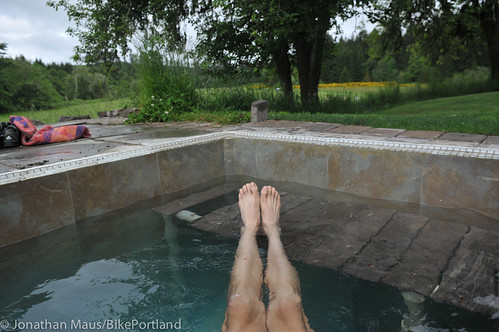 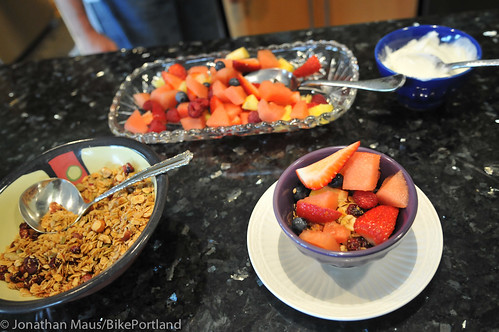 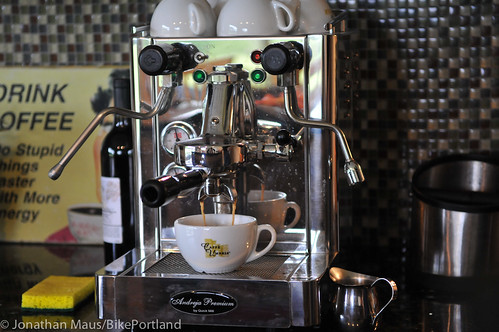 But beyond those comforts, the thing I’ll take away most from my time here is a deeper appreciation of Vernonia history and culture. Sandy has shared all kinds of local lore and stories from her childhood; from picking strawberries in Banks for extra cash as a high-schooler to jumping in the family car for Sunday excursions onto the logging roads where she’d enjoy picnics with family and friends. I’ve also learned how Vernonia’s tragic floods of 1996 — and then again in 2007 — impacted people’s lives. And Glen, who works full-time as manager of public parks for Columbia County, is a wealth of knowledge about the local roads and trails. He’s helped me understand a little more about how the timber industry works and how logging continues to shape Vernonia’s landscape.

The Coastal Mountain Sport Haus — its comforts, its people, and its proximity to great roads — is a true gem. I highly recommend staying here next time you’re looking for a great cycling getaway or just a few days to unwind and connect with Oregon’s small-town, rural heritage. And if you arrive by bike, you’ll get a discount on your stay.

Get in touch with Glen or Sandy via phone at (503) 429-6940 or email innkeeper@coastalmountainsporthaus.com.

— Next up from Vernonia: Ride recaps and photos from the Beaver Falls and Burn Road loops.

Huh. I had no idea. That’s along the route that I’ve taken to the coast. I had no idea it was lodging. I’ve even stopped and taken pictures of the place. I usually spend the night at the county park down the road, I’ll have to stay at this place next time.

Biked past that yesterday on my way to Astoria. Wondered what was behind those awesome gates…

Thanks Jonathan, that looks like an awesome weekend getaway.

J, is it true they have a cx course on site as their website says? I’ve beeb curious about that placr for a while now. Thabks for investigating.

Thanks for asking about that. I’m super excited about what Glen has planned for a ‘cross course… But as of right now it’s just in the planning stages. Their property is perfect for a very good ‘cross venue and Glen is already friends with Brad Ross so suffice it to say it is imminent! I’d bet that we see a Sport Haus Cyclocross Race in 2015.

Do you have the GPS for the loops you did while you were there? Fantastic story!

I just posted photos, notes and GPS route from one of the loops we did… Beaver Falls Loop up into Clatskanie. Really fun and fantastic roads. highly recommend checking it out.

I’m so glad to learn about this place! Thanks!