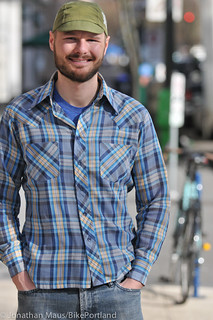 Dave Hoch, co-founder of The Cog Space.
(Photo by J.Maus/BikePortland)

A “recovering SUV driver” with a master’s degree in sustainable business and a job in Portland’s tech sector is setting out to bring two good ideas from the tech industry into the bicycle world: business accelerators and unconference events.

Dave Hoch has just lined up a new co-working space that sets out to serve as an accelerator for Portland’s ever-growing universe of bike-related businesses. Hoch is also hosting an “unconference” event next week designed to bring together people of all sorts interested in “the bike economy.”

Hoch, 33, has been working since December to plan The COG Space. As of this week, he’s sealed a partnership with Forge, a new co-working space for social entrepreneurs and nonprofits that’s planning to open in May at 1410 SW Morrison Street, just west of Interstate 405 near downtown.

Hoch said in an interview last month that in talking with entrepreneurs in the bike world, he’s “hearing they’re really good at their craft, but they’re not business people.”

“The bike community is a lot of boot-strapping,” Hoch said. “A lot of people getting by.”

Hoch hopes that The COG Space can help “raise everyone up together” by offering a suite of services, starting with “affordable” work space but also making it easy to connect with a stable of contractors who offer:

COG Space members can get specialized coaching in various business skills and strategies, too.

In an email Monday, Hoch said he’s looking at a “May-June timeframe” for opening The COG Space. In the meantime, he’s bringing a different tradition from the tech industry into the bike industry: an unconference called UNBIKE.

Held at Velo Cult, 1969 NE 42nd Ave, next Thursday, UNBIKE will invite participants to organize their own ad-hoc breakout sessions about whatever subjects they want to talk about. Anyone who wants to organize a session will pitch it to other attendees, and the group will break into groups according to interest.

Hoch calls it “a user-generated content event that brings together the voices of Portland’s bike businesses. The mission is to bring together the bike community, identify common needs, and join forces in an effort to boost our local economy.”

UNBIKE will start with a 6 pm happy hour and the conversations will run from 7 to 9 pm. The cost is $5.

This is great. Starting a small business- bike related or not- can be overwhelming. The more resources the better. I’d like to hear what type of rates other bike businesses pay for things like workers comp insurance for their riders etc… and this could be the type of place to get that info.

I’ll definitely be there. I build at ADX, and there is a great deal of fellowship of craftspeople there, so it will be nice to meet others who are establishing themselves in my own field.

love the UNBIKE conference idea! Hope it will be the first of many