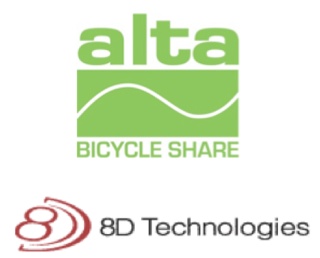 In a big move that will impact bike sharing in the United States and beyond, Portland-based Alta Bicycle Share has announced a new “strategic partnership” with 8D Technologies.

8D is the company that formerly worked closely with the Public Bicycle System Company (PBSC, a.k.a. Bixi), the Montreal based company that filed for bankruptcy late last month. Alta uses the PBSC platform in the many bike share systems they operate and manage around the country and some of those systems (in Boston and Washington D.C.) are operated with software developed by 8D Technologies.

But the relationship between 8D and PBSC soured when PBSC began to export their successful Bixi system to the U.S. while allegedly secretly developing their own software and cutting 8D out of the picture. In April 2012 8D sued PBSC for breach of contract.

That lawsuit was one of only several major problems with PBSC as the government of Montreal began to ask hard questions about the business dealings of the company as it branched out far beyond its municipal roots. The 8D lawsuit and other financial problems took their tool and PBSC filed for bankruptcy on January 21st.

With PBSC’s future uncertain and Alta Bicycle Share and 8D in much stronger financial positions, it makes sense that Alta would essentially cut out the middle-man and begin dealing directly with 8D.

In their announcement today, Alta said they’ll work with 8D to “launch and operate the next generation of bike share in 2014.” Here’s more:

“Named “BSSv4”, the next generation of the 8D system has been in development for a few years, and builds upon the award winning “BSSv3” platform developed by 8D and currently deployed successfully in bike share systems in cities such as Washington D.C. / Arlington, Boston, Minneapolis, Melbourne (AUS), London (UK), Toronto, Ottawa, and Montreal (CAN).”

Alta VP Mia Birk said the alliance with 8D would impact “new clients”, which we assume would mean Portland. In another possible reference to Portland in the press statement released today, Alta said they have a goal of launching new systems in the summer of 2014.

With still no word about a financial sponsor, and a six-month lead-time needed between when that contract is finalized and bikes are deployed, Portland is currently looking at an August launch at the earliet.

As for what this mysterious new system would look like, Alta gave us a taste of what to expect:

The new system has a sleek design, merges the electronics boards and screens, and has an improved docking mechanism linking the bikes to the stations. Other BSSv4 system enhancements include:

Interesting but not surprising move….would seem to be a good move by both parties. I assume Alta would be under less pressure to “own” the software IP (from owners and future investors) vs. Bixi thus this new alliance solves a short term problem without creating too great of one down the road (which Bixi was trying to ‘fix’ a few years ago).

2015 seems more likely. And that’s fine with me. I’d rather it be done right than done fast.

Now I don’t care if they launch this year or not. I just want to see dan eat an inner tube! 🙂

Actually, I do care. The sooner it happens, the better.

It would be my pleasure! Well, not to eat the inner tube, but to see Alta launch here this summer. At this rate, I think we might see some other bike-sharing approach a la Intel or Kiel Johnson before we get an Alta installation.

• Interesting. I wonder where this leaves New York and Chicago, who are using the PBSC offshoot software?

Jonathan: If I am reading this correctly you are saying there is a 6 month lead time on equipment that nobody has ever seen. Very impressive press release. I’m convinced!