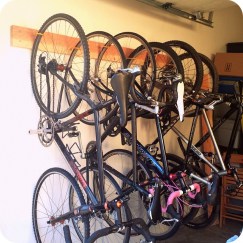 Here’s a quick bike how-to that can save some space in a garage while minimizing drilling into the walls.

It’s from Halley Weaver, who many Portlanders might know from her performances as a “zero-emissions harpist.” With space at a premium in her garage, she threw together a simple plan to consolidate: hang the 12 bikes from the walls.

Weaver shares the specs on her blog:

We are renting the townhouse we’re in and can’t be drilling a ton of holes in our garage. What did we decide on doing? Due to our transportation confines, we got a 6″ x 2″ x 12′ board and had it cut in half at the hardware store. So now we have two 6′ boards. We picked up eight 4″ lag bolts (2 for each end of each board) and 12 bike hooks.

In addition to preventing holes in the wall, the boards also allow more densely spaced hooks because they attach directly to the studs.

Not a complicated trick, but in a state where 20 percent of households own three or more bicycles, it’s one that might be useful in a lot of garages.

And to capitalize on the storage savings, keep your u-lock locked in the bikes’ rear triangles, and even if somebody breaks into your garage, they’ll have a pain trying to do anything with your bike.

Is there an advantage to hanging the bikes by the rear wheels like shown in the pic?

They’re actually alternated (rear/front/rear/front). I do the same in my garage. It just saves space and allows you to pack them tighter together. No real advantage other than that. It’s easier to get the front wheel on weightwise, but that is about the only difference I have seen.

I really want to make a joke about how you should never go from rear to front, but I know that this is a family website.

But that’s the only way it fits!

They alternate. Rear wheel, front wheel. That way we can mash them in tight and for bike with rear suspension you have to hang by front anyway.

I can’t imagine that 20-30 lbs would really make that much of a difference. I’d like to have more faith in bike engineers and fabricators than that.

Indeed. Torsion forces riding over a bump in the road (driveway transition, speed bump, floating esplanade) with your weight on the bike at speed would have to be far worse than the bike hanging by its own weight.

Some people say you shouldnt put 100 lbs in your panniers or 40 lbs on your porter rack either. If a wheel wasn’t meant to handle downward stresses bikeshops would display wheels differently. Longtail bikes wouldn’t exist.

I did this same setup in my garage, except alternating spacing to hang the bikes up/down (with specific hooks spaced for my MTB and TT). Since it’s right next to the washer/dryer the hanging bikes make great racks for drying clothes (being careful of the greasy parts of course).

I built one like that on a long 2×12 alternating the height of hooks so I could squeeze bikes together. It is VERY easy to get bikes on the hooks if you roll the bike back onto the rear wheel while holding the handlebars, then rest the seat against your thigh, then lift the bike with your leg. This way you can hold the front brake so the wheel is not spinning and you are using a very strong muscle.

Careful of not scraping or squishing your full-coverage metal fenders if you got ’em.

As a lifer working bike mechanic, I’ll answer one question before it even comes up–it does ABSOLUTELY NO HARM to the rims, tires, or spoke tension of a bike to hang it by the wheels. A bicycle’s frame and wheels are meant to support many times their own weight.

How about the suspension? Front and rear? Does it matter how those are hung?

Not in my experience. I have heard (and noticed a bit myself) that hydraulic brakes can be a little weird after the bike has been hanging for a while. Usually they’re okay again after a few minutes of riding though.

And if that’s the case, wouldn’t that mean there’s air in the line somewhere and it needs to be bled? I haven’t noticed any change in my brakes after mine has hung for a while – like after a vacation.

Probably. They work well enough and I’m just lazy (I think having too many bikes does that to you, you really only want to fix things that are absolutely necessary).

I have noticed minor brake issues as well, but always attributed it to my old, rarely bled hydraulics. It usually does go away after a little bit of careful riding/

I realized now that it was getting more viewing and questions that I was a little vague on my bragging on “getting shiz done” article on my blog – so I posted a bottom of the page edit where I elaborated more in detail about what I did.

Keep in mind that this is only 6′ of the 12′ board. (Meh, we’re storing a huge sectional couch in our garage we have to move out and then move that shelving unit over to the other side of the garage before we can hang the additional section)

I am actually happier this way, because I was thinking of staggering the boards because of having to set it under where the stud is, but I may leave a gap due to stud placement and set the big rolly tool chest in between. Or, we have one of those leaning bike racks, which albeit we don’t need anymore for bikes, but would be great for hanging helmets, jackets, gloves, etc.

For any mechanic-types out there, does non-horizontal or non-upright storage cause any issues with hydraulic brakes? I would assume not if everything is bled and sealed properly, but…?

I only have one set and am an n =1, but I haven’t seen many problems. Sometimes the brakes are a little weird at the beginning of a ride after not touching the bike for a while, but they usually settle back to normal pretty quickly. I have heard plenty of rumors about people having issues with this, but haven’t really seen/heard any concrete problems.

None here with my hydraulics. I don’t usually hang my bike (I’m the one rolling it in and out every day for commuting), but it has hung during a vacation and I didn’t notice any oddities upon returning to my commute schedule.

My BMC Speedfox with hydraulics hangs for very long periods of time (front down) because I’m mostly a roadie, but when I succumb to peer pressure and take it out for the occasional trail rides it doesn’t seem like any difference (especially during descents). The bike is about three years old now. Don’t know; maybe I’m doing something wrong (like not riding it enough ;).

depends how cold your garage gets I would assume….(hinting at the recent recall).

Many people make the mistake of thinking garages are for cars… 😉

I pretty much have the same set up in my garage, but I did two runs running parallel one about a foot lower the the second. This way you can space the bikes hooks about a foot apart and the handle bars wont interfer with each other.

And you don’t have to alternate rear wheel front wheel on the hook, much easier lifting the front wheel to hooks than rear wheels.

The hooks are a foot apart. The problem is we have many different types of bikes (handles and such some more than 12″ long) and and awkward height difference between my partner and I. So having the alteration helps for a bunch of factors.

I’ve started to add a similar setup to the other side of my garage now, specifically for my racing bike. Because the Garmin and Di2 junction on the handlebars need charging, I’ve decided to place the hook lower on the wall so I can hang the bike [bottom-outward, front-down] from its seat (with the weight on the hoods against the wall). On the wall about parallel with the stem (and to one side) I’ve cut in an electrical outlet and a switch using a dual-gang “new work box” and installed a Leviton outlet with two USB chargers built in. This should allow me to charge the bike’s electronics quite easily without having to remove anything but the dust covers. Oh, the other thing I’ve noticed with this arrangement is that I can lube the chain and clean the underside pretty easily too!