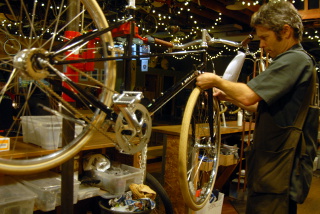 Velo Cult, the two-year-old bike shop, bar and bike-culture hub in Portland’s Hollywood neighborhood, is attracting some attention in the local repair scene for an unusual campaign announced this month: guaranteed walk-in tuneups within 24 hours, all year long.

“If you bring your bike in on any weekday we will have it done and ready to be picked up the next day at the same time,” owner Sky Boyer wrote on the shop’s website Jan. 1.

According to Boyer, the shop is doing it by leveraging the unusual characteristics of a business that also happens to have 10,000 square feet of operating space and 12 hours of staff time each day.

“Square footage for mechanic stations, repair stations, long hours, we just happen to have all the ingredients for it,” Boyer said. “We could get 60 repairs a day or 10 repairs a day. We’re not really sure.”

Boyer said he’ll “probably be tripling my mechanic staff in the next three months,” including a roster of people he can call up to help when there’s a surge in demand for basic repairs.

“I could imagine we’re going to have 100, 150 bikes stored in here at a time,” he said. “If I have to work all night and then do time and a half with my employees, we’re all willing to do that. We’ve had that conversation.”

Basic tuneups will cost $75, which Boyer said is the same that they did last year. There’s no extra fee for the immediate turnaround.

One key to the offer is that the shop will conduct an in-person assessment of each bike when it’s dropped off. If a bike requires more than a basic tuneup, a mechanic will be able to inform the customer then.

Boyer said the offer was inspired by his new service manager, who previously worked at a shop in Pennsylvania that had a similar policy.

“I’ve always wanted to do it, but now I have mechanics capable of doing it, we’re going to go for it,” Boyer said.

Other local bike shop repair specialists, many of whom were aware of the offer, were polite but expressed caution about the offer.

“I’ll be curious to see how that goes,” said Justin Tutor of Crank, located at Southeast 27th and Ash.

Tutor noted that Crank has a somewhat similar policy: it can schedule 24-hour tuneup turnarounds in advance rather than on a walk-in basis.

And Kiel Johnson of Go By Bike Shop, a smaller operation that also operates the OHSU bike valet in the South Waterfront, said he currently guarantees basic tuneups within six hours, before a commuter gets off of work.

“And if we don’t have the right part, I will pedal over to Crank in the middle of the day and buy it retail,” Johnson said.

That’s why back-up bikes are nice!

At last, a shop that recognizes that “the busy season” is a joke.

I learned to wrench my bike after realizing that the “slow time” for every shop is forever “last month or the month before” ago, as if the shop was somehow staffing mechanics to do nothing back then.

Sky’s bike collection alone is that number of bikes (and one could easily get another 150 in that place). I could go in there and look for hours at all the unique bicycles hanging from the ceiling…

The statement about “out of stock parts” in this article really needs to be included on the website. That’s going to cause some disappointment with customers.

On the website they use the term “basic repairs” , that is going to be open to a lot of interpretation, some examples would help.

Also this article left out one of the things that is stated on the website and that’s that you have to come in on a weekday to get the 24 hour turn around.

Did find the out of stock on the website, down at the bottom of the promise is a bit about “special orders”

Thanks, meh. On the last point, I did mention the weekday requirement — it’s in the second sentence of this post.

It seems to me that as more Portlanders go car-free (using their bikes as primary transportation), and as more of the city’s housing is apartments (with limited room for multiple bikes/person), fast turnaround for servicing will be increasingly valuable.

Go By Bike will repair your bike same-day year round (though we do occasionally fill up tune-up spots during the summer, but you can make a reservation for the next day to have same-day service).

This is really nothing new in the Portland area. Bike Gallery has been offering this 24 hour turn around service for the last year.

Thanks for the intel, Mad Dogg. I called Bike Gallery this morning to check this out. Their service expert, Brett Flemming, says that Bike Gallery doesn’t literally guarantee 24-hour service for all basic tuneups. What they do is put “all hands on deck,” on a case-by-case basis, to complete a service job when it’s important to someone (in the case of it being their main commute vehicle, for example). They also use loaner bikes heavily. Flemming said he’d even known Bike Gallery employees to loan someone their personal bike, or a part from it, to make sure someone had a bike for a day while they waited for it to be serviced.

There’s something to be said for both the Bike Gallery to-each-according-to-their-needs philosophy and the Velo Cult chicken-in-every-pot philosophy, I think.

What’s interesting about Velo Cult’s decision isn’t necessarily the operational difference but its willingness to put its flag in the sand on this, marketing-wise, despite the risk that it sets a very high expectation for the busy season.

Champs
At last, a shop that recognizes that “the busy season” is a joke.
I learned to wrench my bike after realizing that the “slow time” for every shop is forever “last month or the month before” ago, as if the shop was somehow staffing mechanics to do nothing back then.
Recommended 0

As a long time bike shop employee, I can honestly say you have no idea what you are talking about. The quicker I get repairs done, the quicker you can have your bicycle back and my shop gets paid. 1 to 1 1/2 week turnarounds are not uncommon in a busy service department during the summer. But, since you “wrench” on your own bike, this won’t effect you.

Back in the late 1970s I drove a soft drink delivery truck for the local Brand P bottler. Competition with Brand C was fierce (but was always friendly). My boss used to say, “everyone has a product, what we sell is service.”

Does any shop have loaner bikes?

I’m thinking about how cars are serviced. Many people don’t have multiple spare cars, so when a car commuter needs a routine service, the work gets done same day and at the fancier sort of dealer there may be a loaner car too, for work that takes longer. Perhaps that is the model that bike service will eventually get to, as bikes become our cars.

Good question. Bike Gallery is one local shop (well, a bunch of local shops) that uses loaner bikes frequently. See my comment to Mad Dogg above.

Two summers ago I ahd an issue with a hub on my touring bike right before I was about to leave on a week long vacation. I might have been able to fix it myself but I was concerned about it failing on me while I was on the road. I took it to Velo Cult and explained the situation and they moved me to the front of the line and fixed it for me while I had a beer. Awesome customer service for sure.

I instituted 24 hr repairs over 15 years ago at the Hillsboro Bike N Hike when I worked there. I’m not sure what happened to that policy after I left. It is not that hard to accomplish and the store benefits by not storing lots of repairs taking up valuable space. Doing simple on-the-spot repairs, such as tube and tire replacements, helps the 24 hr turn over as it cuts down on paper-work and the mechanic hustles to get the bike back to the customer waiting in the store.

OHSU and Go By Bike will be getting some competition on the same day tune ups? I think everyone wins. Hooray for Velo Cult.

Over at Block Bikes PDX (in St Johns) we only have bikes longer than 24hrs if we’re waiting on a part, or we’re closed the next day. It is surprising to me how many people expect us to have their bike for at least a week. We don’t have a policy of it, but if someone needs their bike, we’ll get it done for them.

Can we get a definition, from the bike shop, as to what is included in the 24-hour tune-up?

Here’s the phrase from my notes when I asked Sky this question: “All adjustments: hubs, shifting, brakes, truing wheels.” It’s a sentence fragment, so it’s possible I left out something at the start or end of this answer.

Velo Cult, where you can enjoy a $5 beer while a wrench replaces a single spoke for $30.

I have never had a spoke replaced, but when they worked on my hub they spent 15-20 minutes and I believe they charged me 5 dollars, it might have been 10. I just remember being surprised how cheap it was. Not sure why you had a different experience, but I also benefited from beers being a dollar off during happy hour.

Just a note that if you got your imported Dutch bike at Clever Cycles, they are going to be the best place to get it maintained or repaired. Although they usually have a backlog, they also have a rental fleet so there is a good selection of familiar loaners.

Every time I’ve taken my Azor to some more convenient shop, it has come back broken in some way. At Velo Cult, the service itself took longer because they didn’t have parts in stock, and within a day of getting it back both wheels came loose! Very disappointing.