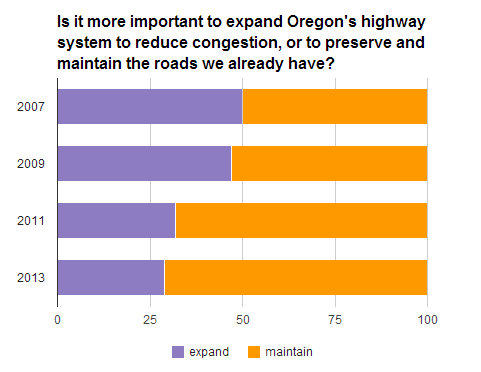 A newly circulated state survey has offered the latest sign that Oregonians are thinking about transportation in a fundamentally different way than they used to.

As recently as 2007, almost 50 percent of Oregonians said it was more important “to expand the highway system to reduce traffic congestion” than “to preserve and maintain the highways Oregon already has.” As of this year, that’s fallen to 29 percent.

Meanwhile, for the first time on record, more Oregonians said that “adding sidewalks and bike lanes to existing streets” is “very important” than said “expanding and improving highways, roads and bridges” is “very important.” In all, 40 percent of Oregonians gave high priority to more walking and walking facilities, while 34 percent said the same of road expansion.

In another new finding from the Oregon Department of Transportation’s 2013 Needs and Issues survey (PDF) (PDF), 40 percent of Oregonians said that “reducing greenhouse gases” should be a “very important” priority for the state transportation agency. Another 38 percent said this is “somewhat important.”

Meanwhile, the number of Oregonians who consider it “very important” to reduce traffic congestion has fallen from 60 percent in 2007 (PDF) to 43 percent this year. The number of people putting high priority on “conserving and protecting clean air and water,” “improving safety features on roadways,” “protecting fish and wildlife habitat,” and “adding sidewalks and bike lanes to existing streets,” meanwhile, are all on the rise since 2009, the first year those questions were asked. Here’s the public’s priority list as it stands now: 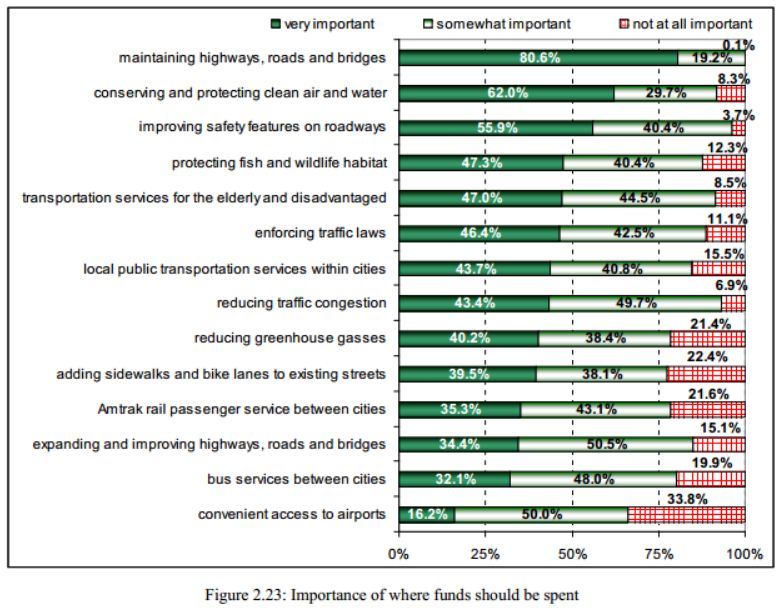 Road congestion is still a concern for a large minority of Oregonians, especially in the Portland area. According to the Oregon Department of Transportation, which conducted and analyzed the survey, 52 percent of Portland-area residents see congestion as either “somewhat or very serious.” (The other 48 percent, meanwhile, say it’s “a minor problem” or “not a problem at all.”)

But even in the Portland area, highway expansion isn’t a major priority for most — even when the survey question itself promises that highway construction will “reduce traffic congestion.” Only 32 percent of Portland-area residents said expansion is more important than preservation:

ODOT’s statement about the survey noted that “concern about congestion has dropped since the 2007 survey, possibly because the slow economy and reduced vehicle miles traveled have cut gridlock somewhat, but congestion concerns grew slightly from the 2011 survey.”

In a possible sign that bicycling has become a more polarizing subject since 2009, more Oregonians have begun reporting that they never ride a bicycle, even as the number who feel it’s unsafe to ride in their community has been declining. The percentage of Oregonians who feel biking is safe in their community, meanwhile, has held steady at 40 percent:

The survey, completed in July, was circulated in an Oregon Department of Transportation newsletter Monday. As our local office of the agency formerly known as the Oregon State Highway Department pushes forward projects such as the $118 million Sunrise Corridor now in construction or the proposed two-lane, $400 million widening of Interstate 5 at the Rose Quarter, we hope they’re considering their colleagues’ research on what the public actually wants.

Update Jan. 6: An earlier version of this post incorrectly displayed a table from ODOT’s 2011 report rather than its 2013 report. The analysis, however, was and remains accurate.

You hear that ODOT???? Think it might be relevant to Barbur????

Chris I
Reply to  Charley

This is a huge and very rapid shift. Amazing, really.

However I’m sure ODOT will find a way to spin it to suggest what they have been doing is perfectly aligned with what this poll shows. Matt Garrett might even talk about silos. Ha.

The people who pay to fund state transportation projects have spoken. Give them what they want.

Paul in the 'couve
Reply to  Adam H.

I’d say right on but I wouldn’t want “anyone” to think I’m arrogant for table thumping that he is wrong.

This is where you find out that you are being ruled and not represented by your government.

The big assmption in that above the foldquestion being that expanding the highway system would actually reduce congestion.

Even phrased in that biased way “build more” still doesn’t win over maintenance.

The results are encouraging, but the questions all seem pretty biased. For example the prioritization question “adding sidewalks and bikelanes to existing streets” seems unnecessarily specific and implies that as long a street already has any sort of sidewalk or a bikelane it is fine no matter how unsafe that street is. Something like “improving bicycle and pedestrian access and safety on streets” may poll considerably higher.

So the question seems to be, “do you have the necessary facilities to bike safely in community?” I don’t understand the point of the question. Would that be asking whether I feel I can bike safely around my neighborhood, and perhaps a little further outward? Why not have it phrased the same way as the automobile one? “Feel safe travelling by bike”. I might actually use my bike to go somewhere, you know.

The scales used in the survey will be a handicap if they ever want to do anything beyond basic descriptive reporting (regression, etc.). It’s like requiring that a teacher give all their kids As or Fs — this approach likely oversimplifies how people really think about these issues. For that preserve vs. maintain question in particular, it would have been better to ask it as a 9 point scale with “preserve” at one end and “maintain” at the other end. That would give us a much more nuanced view of people’s attitudes.

/tldr: this commenter is a market research wonk

So, wait a minute. 42% of Portlanders believe that they have safe cycling facilities in their neighborhood. Why do we then have a paltry 6% mode share with bikes?!

What do we need to do, charge people to get out of their cars or something?

“What do we need to do, charge people to get out of their cars or something?”

Dan
Reply to  was carless

I think this is people responding that they could, hypothetically of course, ride safely around the block a few times. Whee!

Census mode share calculations are a bit of a joke. For example, every single student commuting to PSU, OHSU, PCC, UP, Reed, L&C etc is not counted as a commuter.

I would imagine that a large portion of those 42% either don’t bike or don’t bike on the streets. Of course they think they are safe. They look perfectly safe when they speed by in their cars.

davemess
Reply to  was carless

I think that goes to show that not everyone wants to ride a bike. Many are lazy when it come to transportation or they like their routine. Or the simple fact that the auto still dominates in our country and is too engrained in our way of life for people to try out those safe cycling facilities. Just because they think they have safe cycling facilities doesn’t mean they want to give up their car.

i agree that improved facilities will increase ridership. But it is definitely not sufficient alone to see the kind of change many on here would like.