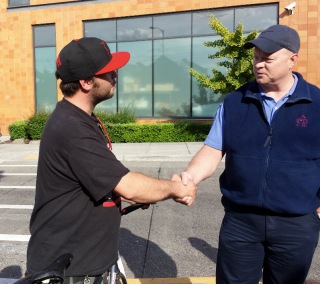 TriMet released this image of the man who was hit and
the operator who came to his aid.

A man posted on Reddit this morning about his harrowing experience of being struck by a MAX train. He said it happened at a station somewhere near the northeast Portland/Gresham border and that his use of headphones directly contributed to the collision. Here’s “fehu’s” post:

I was on my way to work, and got off at my stop in Northeast Portland/Gresham. I had my headphones in like a dumb ass, and went to cross the intersection before my train had left.

I mounted my bike, like I do every day, and went to cross the intersection. When I noticed the train, it was about 20 feet away, and my body was dead in the center of the tracks. I turned a sharp left, because I knew I couldn’t push past it in time. My front wheel got caught in the track. I unclipped from my pedal, put my foot down, and pushed myself and the bike about six inches back.

At that moment, the left front corner of the train hit my ass, shoulder, and back wheel. It threw me from the cross walk to the center of the intersection. I landed on my ass, which is rather sore. But I’m fine. Emergency personnel and TriMet authorities responded immediately, and told me I was very, very lucky. Reports were filed, and as I have no injury aside from a bruised ass, I went home for the day.

I almost lost my life today out of complacence.

TriMet public information officer Roberta Altstadt replied to “fehu” on Reddit to say, “We at TriMet are also happy you were not seriously hurt and appreciate your safety message for others. It is extremely valuable for others to hear a first-hand account.”

Another TriMet spokesperson, Mary Fetsch, said they’ve tried to contact fehu in hopes he will share his story with the local media. Being attentive around MAX trains — and especially not wearing headphones — is a major concern for the agency and has been a subject of their safety marketing for years.

As for fehu, he knows how lucky he is and he also knows what a huge mistake he made. “The police asked the value of the damage to my bike so I could make a claim with TriMet to get it fixed,” he wrote in the Reddit thread, “I declined and told them that It was my fault and that I’m happy to be walking away with a broken bike and a life.”

I saw your first tweet about the Reddit post and flinched away, fearing the worst sort of story. I am SO glad this guy came off relatively unscathed! Lucky indeed.

The old “Stop-Look-Listen” message about railroad tracks got hammered into my head as a kid, and it seems like it’s still pretty applicable.

Nothing wrong with promoting the “head-up/safety” message in the local media, but I’d be more excited about promoting the “no need to file a claim–it was my fault” message worldwide. Thanks for having the strength to say that, fehu!

Eh, they have insurance. You’re not saving the world by declining to get your bike fixed.

You have hereby and henceforth forfeited all rights to complaining about the high cost of insurance.

Chris I
Reply to  Phil Kulak

It’s death by a million cuts. We have to be responsible for our actions at all levels, regardless of impact. It’s a cultural problem that seems to be getting worse.

I don’t think there would be anything wrong with filing a claim. That is why we have a robust court system and system of insurers. I mean if there are legitimate safety issues at some of the crossings, then perhaps a claims investigation would find them and yield recommendations aimed at preventing future injury or death. If on the other hand, this poor fellow just did something completely stupid then the claim is just going to be rejected. Seems like a win-win to me. Narratives about personal responsibility are seductive, but I prefer to let a 3rd and impartial party determine culpability.

Seriously.
We have other senses like vision.
Even with medicated ADHD I’ve never failed to notice vehicles.
This is because I cultivate a simple philosophy: expect the unexpected.

Exactly my thought was:

I’m on the fence here. I get plenty tired of all the other victim blaming, and “safety device/practice X is teh awesum!!! (for me)”, but I use my ears a whole lot when I am riding — I hear around corners, I can locate the car behind me as it approaches (in particular, is it moving to the left???) I can detect big trucks coming from behind early and figure if they’ll have an easy pass or not (i.e., I have time to sort out the oncoming traffic). I’ve tried riding with headphones in the past, and was not comfortable.

But, that said, I’m not a big fan of telling people what dummies they are for not using my favorite safety device. Maybe I use my ears more than most people. If I’m not on the highway and I’m driving, I tend to roll my windows down then, too, so I have a slightly better idea what’s going on around me. A brief look at most cars on the road tells me that this is not usual-case behavior.

It would be interesting/nice if someone could look into more directional warning devices for things like trains and construction equipment before we just go plastering beepers onto trains “for safety”. There’s been road construction for months around where we live, and we’re plenty tired of beep-beep-beep-beep. There’s been work on focussed sound beams; if the beep-beep-beep could be confined to a short range near the dangerous end of the train, plus project a little distance in the dangerous direction, that would be lovely.

Another possibility, unfortunately probably energy inefficient, would be a heat lamp aimed in the dangerous direction, activated when the train is about to move. I feel the heat from cars when I ride past them; an actual lamp intended to radiate heat might make me look.

Chris I
Reply to  dr2chase

Trains are pretty easy to avoid, they travel linearly, in a very predictable fashion.

dr2chase
Reply to  Chris I

I’d feel a little silly putting on headphones only to cross train tracks.
Not hearing what’s going around me gives me the willies all the other places where the risks are so much less structured. But again — that could just be me, other people use mirrors, careful looking, guardian angels, what have you.

Isn’t there also sign that you cannot ride your bike near max station? My buddy got a ticket because of it.

You can’t ride your bike on a station platform. But the man in the story was crossing the tracks next to the station, so it would have been legal — if the light had been green!

Is this real? TriMet is usually pretty good about tweeting & emailing about incidents and I didn’t see anything at all from them about this. My BS detector is warming up.

That said, be careful out there, people!

Just for the record…Spiffy…”until they make it a crime to be deaf in public I wish people would stop complaining about headphone users..” – it is a crime to wear headphones while operating a vehicle…ANY VEHICLE…& yes by O.R.S. standard, a bicycle MUST obey all motor vehicle laws…because we we fought and were given the same rights and responsibilities as any motorized vehicle on the roadways. If a “driver” is wearing headphones (or using a cell phone, texting, etc.) and is unaware, oblivious or just disregarding other roadway users and hits and kills someone, who amongst us wouldn’t be pissed? If a cyclist wearing headphones hits and maims/kills a kid, you can bet your bottom dollar we are all going to have to have liability insurance just to ride bikes. Glad he’s alive. Wear ’em if you want…but if i call “car back” & you don’t hear me…well, it’s all on you. Music is not as important as safety. (period)

Care to cite the ORS statute that makes it a “crime” to wear headphones? I’ll be waiting patiently.

You seem to equate all riders with headphones as oblivious. Somehow, I can stay vigilant by frequently monitoring my surroundings visually.

Apparently it isn’t illegal in Oregon to wear headphones, but is in WA and CA. Doesn’t make it a very bright thing to do however.

Is also illegal in Massachusetts, at least for a car driver.

I can hear environmental noise better with headphones and music on my bike than any person in any car with the radio OFF! and the windows up, the car in motion and the engine running. I’ve run this experiment repeatedly between my bike and several cars. I never listen to it so loudly that I can’t hear my freewheel clicking (in which case, I’d hear you yell “car back!”)

This guy made the mistake of not looking before crossing an intersection (with a train!).

John – You probably have your music on at a safe level but it may not matter….the guy behind you might not not even say “on your left” or “car back” if he can see them. I know I wouldn’t.

Just for the record, Jolly Dodger, I will decide what is and is not important to me.

I have totally fallen off my bike near MAX tracks. Granted, I had just gotten my bike off the train, hopped on it, and started pedaling away from the station. I saw a water fountain directly in front of me, and in the split second it took for my brain to decide whether to turn the handlebars left or right, I fell off my bike still clipped to the pedals. I know the MAX driver saw me fall. It probably made his day! (They all seem to dislike bikes, or is that just me?!)

I’m all for personal responsibility, but MAX trains have killed WAY more pedestrians (well into the double digits) than seems reasonable in the years I’ve lived here. I know that in almost every case it was the pedestrian’s “fault”, but still ..

It is incredible that many pedestrian crossings of MAX tracks have absolutely no visual indications to warn of oncoming trains. I can understand no crossing gates coming down as they have in Japan, because of the risk of trapping a handicapped person on the wrong side. But c’mon, no flashing lights? Cars get them. Why not pedestrians?

I especially see a lot of close calls at Beaverton TC, with three sets of tracks, all of which can carry active trains at the same time, and where you must cross tracks to enter and leave the station in any direction. No flashing lights or any other indications of which track has an about-to-be-moving train, and it’s not always obvious which one is about to pull out.

A significant portion of those deaths are suicides, or likely suicides. You should see some of the cities in Europe that have had Trams for over 100 years. In Budapest, they have a surface-running Tram similar to MAX, except that it runs at about 50mph at times, with no crossing arms or other protection for pedestrians. By comparison, MAX travels like a turtle through Portland.

I like that he acknowledges his carelessness and doesn’t whine about getting his wheel caught in the MAX track. It’s like he expects to be responsible for his actions and to have a minimum level of skill when operating a bicycle.