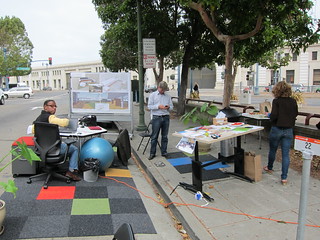 This Friday, Sept. 20, Park(ing) Day celebrations are going down at a few spots around Portland. But the most interesting might be the plan for SW Stark Street between 10th and 11th, close to Powell’s City of Books and just outside the Ace Hotel.

“We’re taking all of the parking spaces on SW Stark between 10th and 11th and turning them into extra bike parking, ping-pong tables, public parklets and outdoor seating for the nearby restaurants,” writes Katrina Johnston, the local researcher and designer behind THINK.urban. “Ace Hotel will also be doing two spaces in front of their place and there will be an event going on at The Cleaners that will serve as an unofficial after party.” 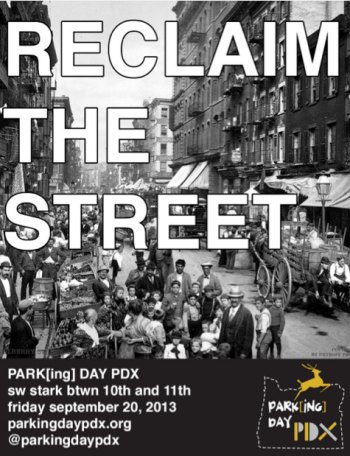 Sounds like a terrific event, especially since it’s happening in the heart of a downtown that’s in the midst of a big, multi-year conversation: whether to preserve every possible on-street auto parking space or to experiment with using all that real estate (it’s worth $20 per square foot per year) in some other way.

Last year, the Downtown Retail Council of the Portland Business Alliance, our local chamber of commerce, decided to oppose all expansion of a city program that let retailers opt to convert public auto parking to outdoor commercial patios.

That seemed like an odd decision, and it’s worth wondering whether the Downtown Retail Council really spoke for a majority of downtown retailers. In any case, stop by this downtown block party on Friday if you’re interested in thinking for yourself about interesting new ways to put our precious downtown land to use.

Closer to the east side? Check out Alta Planning and Design’s setup at 711 SE Grand. Look for the luau theme and (we’re told) the hot tub.

The “Downtown RETAIL Council” opposes the right of RETAILERS to CHOOSE to find something better to do with a parking space.

Yes, I do believe they don’t represent their constituency well.

Chris I
Reply to  peejay

They’re afraid of anything that attempts to charge the market value for parking. If businesses start paying for spots to hold additional seating, people will start to realize how absurd it is to allow citizens to store private property in 20sqft sections of prime downtown neighborhoods for $1.50 per hour (or free after hours).

What time will the event be held? Neither the article or the web site give hours….

What are the time limits on those spaces? You can’t just keep plugging the meter.

but this event isn’t about properly following the parking laws, it’s civil disobedience…

We got a permit. No plugging required.

Too bad, that cuts right through the work day – no evening hours?

I guess that I just don’t get the point of this exercise – in Portland.

We have the highest park acreage per capita in the US. The idea of Park(ing) day makes more sense in densely packed urban cities that lack green space, such as San Francisco.

If anything, however, Portland’s sidewalks are cramped compared to other cities, and the pedestrian environment is heavily compromised by the proximity of automobile traffic.

SilkySlim
Reply to  was carless

Really? You don’t get it at all? The fact that we offer insanely cheap hourly leases on land that is truly invaluable?

Do you have a source for that claim? I can’t imagine we beat out Houston or Atlanta in parking acreage per capita…