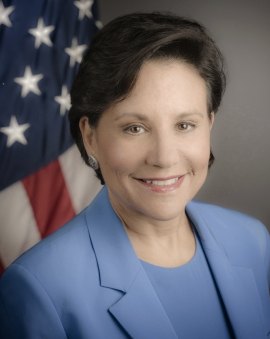 Secretary of Commerce (and triathlete)
Penny Pritzker.
(Photo: US Dept. of Commerce)

In the latest nod to Portland’s reputation as an epicenter of the bicycle industry, the U.S. Secretary of Commerce Penny Pritzker will visit United Bicycle Institute (UBI) in North Portland on Friday.

The Department of Commerce announced the event as part of Sec. Pritzker’s nationwide “listening tour.” “In these discussions,” reads a media statement, “Secretary Pritzker will hear about their priorities, concerns and ideas on how the public and private sectors can work together to strengthen the economy and create American jobs.”

UBI has been chosen as a tour stop because, the Dept. of Commerce says, it’s, “the bicycle industry’s leading technical school.” The North Portland campus (they also have a campus in Ashland) offers courses in bicycle repair, frame building and professional mechanic certification. While at UBI, Pritzker will meet with staff and hold a roundtable discussion with representatives from the local bicycle industry.

And there might be some personal enthusiasm at play here too. Sec. Pritzker, who was appointed to her post by President Obama in June, is a dedicated triathlete and sources say she’s “really into cycling.”

This isn’t the first time the Dept. of Commerce has shown an interest in Portland’s potential as a bike industry jobs creator and bicycle product exporter. Two years ago, three Dept. of Commerce staffers toured the manufacturing facility of Chris King Precision Components in Portland’s Northwest Industrial District. After that visit, Assistant Secretary for Manufacturing & Services Nicole Lamb-Hale noted that, “Not only are its parts currently being used in the Tour De France, but nearly 40 percent of the company’s products are exported to Europe and Asia.” The Obama administration was so impressed by Chris King’s business that Chris King himself received a personal invitation to the White House to discuss U.S. job growth.

With our deep reservoir of local bicycle know-how, a livable city that attracts the best and brightest workers, and historic legacy of industrial and manufacturing capabilities, the bicycle industry sector is destined to become an even larger and more important part of Portland’s economy.

I hope she is able, as a triathlete, to see past bicycling as a sport or recreational activity and truly come to terms with the established fact that it’s also a perfectly valid form transportation and really serious business both here and around the world.

Former Ohio congressman LaTourette (R) got behind a Federal “Complete Streets” bill in 2010 partly because I gave him a copy of Minnesota Business Magazine which had a cover story about the millions of dollars of business and numbers of employees that were generated by bicycle-based businesses. Up until then, he had annually met with us as part of the National Bike Summit, but he didn’t get behind cycling or understand its benefits. Showing him statistics and photos about bicycle businesses making things, selling things and employing people really got his attention.