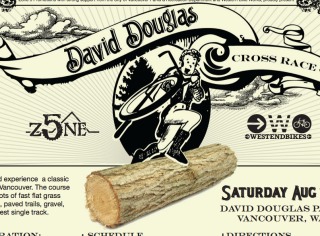 Detail of flyer for this weekend’s opening
race in the Grand Prix Erik Tonkin series.

This weekend the Portland area’s legendary cyclocross racing tradition will commence. The first big event of the year is the opening race of the Grand Prix Erik Tonkin series, and it takes place this Saturday at David Douglas Park just over the Columbia River in Vancouver. The race kicks off a busy cyclocross schedule that includes racing all over the region every weekend from now through the first week in December.

Kenji Sugahara, the executive director of the Oregon Bicycle Racing Association, says he expects to see a membership spike in the coming weeks that could break a record (one that was set last year). “Cross has really been amazing for OBRA,” Sugahara shared with us yesterday, “I’m hearing a lot of excitement for it this year.”

Erik Tonkin is known for his hairy legs — a rarity at the elite level of cycling —
which explains the Sasquatch reference in the series logo.

David Saltzberg, the race promoter behind the GPET, says the series has grown considerably each year since it began in 2011. On a calendar that includes the famous Cross Crusade series — which includes the world’s largest cyclocross race (in terms of participation) — finding a niche among ‘cross enthusiasts is no small task. But Saltzberg says he’s found success by establishing a different vibe at his races that you’ll find at the Crusade. “We try to make our races a bit more Euro, with the focus on pure racing,” he said. “Our courses tend to be a bit longer and faster [than the Cross Crusade].”

While the Cross Crusade is known for its raucous, festival atmosphere, the GPET has a calmer vibe where the racing takes center stage. But that might change as it grows in popularity. While the largest Cross Crusade race has had over 1,400 racers, Saltzberg said he might just break 600 total participants tomorrow. 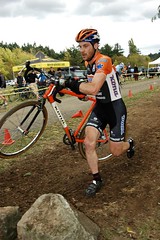 As for why his series is named after local racer Erik Tonkin, Saltzberg says that’s a tradition that started three years ago. “The naming thing was sort of a joke at first, but it sort of stuck.” “The idea,” he says, “is to honor somebody who is involved in the cross scene in Portland. We’re honoring them, and at the same time it’s sort of a roast. We have fun with it.”

Other local racers that have had the honor include Molly Cameron and Tina Brubaker, both of whom are stalwarts always at the top of their fields while being excellent human beings and leaders off of the race course as well (just like Tonkin).

For those who still haven’t experienced the local cyclocross scene, OBRA’s Sugahara says it’s important to remember that, “Racing isn’t just for the spandex crowd.” “A wonderful and diverse community engaging in a healthy activity with tons of friends is an experience not to miss.”

One of the things that makes cyclocross such a great discipline is the strong community vibe that happens at the races. Race promoters usually route courses right through spectator areas, which makes watching the action easy and fun. Races are also big hang-outs for friends, families, and the dozens of teams that set up mini-camps along the course.

For new racers, cyclocross provides an unbeatable entry-point into the competitive side of bicycling. One reason for that is the fields get so mixed on the short courses that, as Sugahara says, “You can’t tell who’s first or last and everyone cheers for everyone!”

Stay tuned for more cyclocross coverage throughout the season thanks to our official sponsor Sellwood Cycle Repair.

For those coming out to the race … pedal by Vancouver’s new 4 mile long (lane miles) buffered bike facility on MacArthur Blvd. (It should be done or almost done…depending on any rain delays)…

…and for a great cup of coffee near by stop by River Maiden.

Everyone could always tell that I was last.

Let’s hear it for fixed ‘cross!

Are you listening, Candi?

I put in the “Chicken Track Pump Track” in a yard at the NE corner of David Douglas Park.
Tight, fun, fast and purposely really close to trees and fences.

I would try to ride it if I were you…

Good job out there Jonathan.

Vote Up0Vote Down  Reply
« Job of the Week
With shouts and smiles, Breakfast on the Bridges expands to the Burnside »