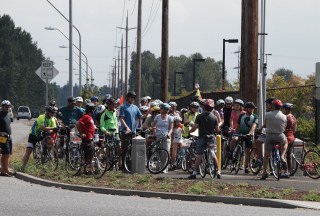 A big crowd showed up to learn more about the project.
(Photos: Jacob Brostoff)

A Washington state legislator, the bicycle-pedestrian coordinator for the Washington State Dept. of Transportation, the mayor of Vancouver and several city council members and council candidates and representatives of the Port of Vancouver and the US Congress were among the more than 70 people who turned out Friday afternoon for a ride supporting a new cycle path along NW Lower River Road in Vancouver. Speakers touted the benefits of a new path, and urged community residents and leaders to push for additional funding to speed up its completion.


“This will make all the natural areas west of town more accessible. And people will come to take advantage of it and eat at local restaurants and stay at local hotels.”
— Larry Smith, Vancouver City Council

Moms pulling kids in trailers, kids on their own bikes with their dads, bike commuters taking a quick break from work, recreational cyclists sporting ties and other “professional” attire, baby boomers and empty-nesters were also among the peloton that rode along River Road and the newly completed path section.

“This ride proves that our community really wants this trail and will benefit from it,” said ride organizer Todd Bachmann. “This will be an awesome carrot to get people out to Frenchman’s Bar and Vancouver Lake.”

Vancouver City Council Member Larry Smith echoed that sentiment. “This will make all the natural areas west of town more accessible. And people will come to take advantage of it and eat at local restaurants and stay at local hotels.” 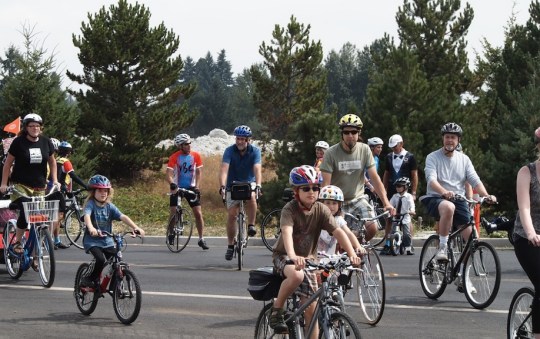 Said Mayor Tim Leavitt, “Residents want accessibility and connectivity. This trail will encourage people to get out and provide them with another safe way to get exercise and be in better touch with the environment.”

NW Lower River Road runs through Port of Vancouver land. A small section of the trail, all of which will be a multi-use path separated from the road, has been completed, with funding secured for another small portion. But with funding tied to development in the port, officials estimate the complete 3.7 mile trail could take 25 years or more to complete.

Bachmann said he staged the ride primarily for state representatives, as in normal budget years, the state has funding for transportation projects like the LRR trail. “We know they don’t have the money right now,” he said. “But we wanted to get this project on the radar screen so that when the economy turns around and there is funding, we’re high on the list.” 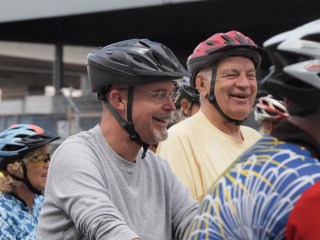 State Representative Jim Moeller, who serves on the House Transportation Committee, said he would be happy to work with the community to incorporate funding for the trail in a state transportation funding package. “This is a very worthwhile project.”

In addition to budget allocations, other sources of funding are being explored. “I was very impressed by the turnout,” said Ian Macek, Washington State Bicycle and Pedestrian Coordinator, “and I will be working with the port to apply for state and federal bike and ped and possibly recreation and conservation grants to speed up construction of the trail.”

Everyone on the ride was jazzed both at being able to ride on a path separated from the fast truck traffic on the road, even if for only a short section, and also at the possibility of having their own path all the way to the recreation areas west of town.

The ride took place early afternoon, and most of it was on the narrow shoulder of the very busy River Road. “Now I know why I don’t come out here during the week,” local resident Holly Williams said, as big rigs and other vehicles swept past. “Trucks are scary, right next to you and coming from both directions. There’s no place for you to get out of the way.”

Riding on the completed section of trail, Mary McLaren, a Vancouver Bicycle Club member said, “I wish this could go on forever!”

A frequent rider to Vancouver Lake, Nancy Chandlee was also thrilled. “This is really neat. People would start flowing out there with a real trail. And this is how things happen, everyday people getting involved.”

Organizers plan to do just that, get more people involved and encourage them to speak out for the trail. Check the BikeVanWA blog for updates.

Thanks for the report, Madeleine, and for the link to the Bike Vancouver WA website – I didn’t know that!