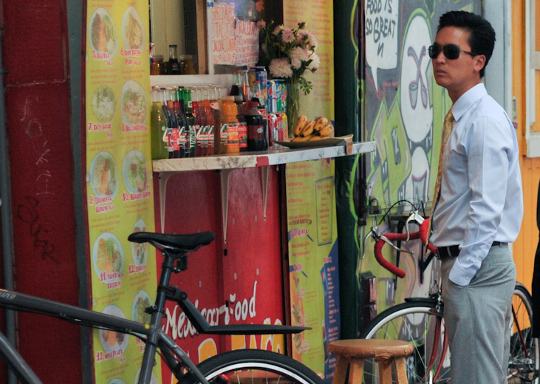 In the first six months of 2013, 92% of net demand for top-grade office space in downtown Portland occurred within two blocks of a food cart pod.
(Photo by J.Maus/BikePortland)

Got some cubicles to rent in Portland? A local real estate analyst says you’d better hope there’s a food cart pod nearby.

As firms pile into downtown — it’s the most crowded commercial real estate area in the city (PDF) — researcher Patricia Raicht of Jones Lang LaSalle has stumbled on a surprising trend. Downtown office buildings, she says, consistently fill up faster when they’re close to food carts. 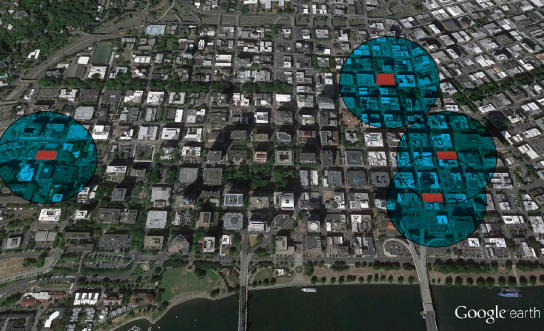 It’s because the city’s growing hive of creative workers craves the affordable chow and freeform lunch style dished up at these former parking spaces, she says.

“When our brokers are out talking to tenants, what they’re hearing over and over again — and particularly with creative tenants and tenants that have a younger demographic — is that there are a lot of things that are really important to them,” Raicht said in a July interview about the trends in net absorption rates for Class A and Class B office space.

Factors that almost every young firm seems to be looking for in office space, she said: bike access and parking; plentiful light; open, unwalled office layouts; easily configurable collaborative areas; and a pod of food carts within walking distance. 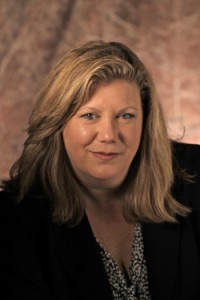 “In the design of their space, they have a large communal eating area,” Raicht said. “At a certain time, a big group of people go out to the food carts, get their food, come back, and they eat together as a community in these large cafeteria-like areas.”

According to the most recent figures available, Raicht calculated, the Class A office vacancy rate surrounding downtown’s four main cart pods was 5.9 percent, compared to a downtown average of 6.7 percent. That gap is smaller than the one she noticed last fall. In numbers first reported in December by the Portland Business Journal, Raicht had found an average downtown vacancy rate of 8.3 percent, compared to 5 percent in buildings surrounding the cart pods.

Raicht’s conclusions aren’t ironclad; there are certainly other factors at play here, and food cart pods probably tend to arise in locations near high-quality office space. But Raicht said her team was motivated to do this research because the food carts seemed to be such an important perk for workers who, she said, represent a “new ethos” in Portland’s high-end office market.

Raicht attributed changes since last fall to the heat of the local office market. Downtown Portland has one of the country’s lowest commercial vacancy rates, she said, and is basically running out of space altogether.

Her findings certainly seem to fit into trends around the world. From Rome to New York to Denver, cities are turning to human-friendly spaces as the focus of retail activity and civic identity. Food cart pods are probably the most famous example of street life that our city has.

I wonder how many of those young creative folks get creative in the kitchen and make their own lunches before they head off to work?

I find it’s actually more expensive to make my own lunch before heading off to work than it is to buy lunch at a food cart. Your results may vary.

I would imagine that depends on what you’re taking for lunch–I usually pack leftovers from dinner the night before and that’s particularly economical (unless it was crab or steak or some such:).

Totally unsubstantiated hearsay opinion here, but I’m guessing those young creatives work too many hours to do actual food prep of their own.

Or get paid enough that it’s not a financial burden to spend ~$160/mo on lunches.

Or never learned how to cook an economical and nutritious home cooked meal.

Also, to dispel some misconceptions, our tech startup:

– knows that burnout is expensive so we work normal hours.
– pays enough for most employees to eat lunch from a food cart without worrying about the cost.
– is arguably not “young.” Ages 30-48
– employs people from diverse backgrounds with wide array of skills: from GED to PhD, pro musicians, NYC/Boston marathoner, PSU adjunct prof.

8 out of 9 of us regularly walk or bike to work, so *that* broad brush would fit if you want to paint us with one.

I teach cooking classes in a variety of settings, focusing on simple, delicious, local produce-driven dishes and making everyday meals less of a burden to make and more of a joy to eat. Maybe we could do a class for your start-up sometime. My business is Cook With What You Have (www.cookwithwhatyouhave.com). Katherine

Unless your business is a sit down restaurant.

Is there any evidence whatsoever that food carts are harming Portland’s sit-down dining scene? Judging by the number of restaurant openings (especially downtown) in the last few years, I would think that’s a hard case to make. At most, I could imagine that the food carts would make it uneconomical to open a new Subway or a Quiznos downtown. And good riddance.

Lots of food carts have evolved into full sit down restaurants (Whole Bowl, Brunch Box, Lardo to name a few) that either close their cart or keep a sister cart open. If carts were a detriment to sit-downs, then that evolution wouldn’t even happen. I say that carts are a great method for testing the waters on a new restaurant idea and makes for a thriving food ecosystem in Portland.

When our start-up had to relocate two years ago, the 10 techies in the Portland office (via forced binary survey, of course) ranked proximity to food carts #1 or #2, although “has a kitchen” was up there too. We ended up a 6th and Stark and at least a few people eat at the carts each day.

My office is in a foodcart desert.

…there may be need for City policy on “food cart permit equity” … food and food cart deserts are “bad”. ‘-)

All joking aside, food cart deserts are bad

dude in pic doesnt fit the bill yo! sorry just having fun 🙂 toooo dressed up for Portland seems like we have some oxy stuff with the culture with TECH and offices around downtown these days eh.. super loose or super tight. me well simple 🙂

I would be cautious about locating an office based on food cart selection and sites…this trend is very new and could evaporate quickly based on many issues (health code, land use, economics, fad eating trends, etc.). It is similar to making real estate decisions/ investments based on bus lines vs. fixed rail stations…

I only worry that the hot downtown real estate market may kill these food cart pods, when the owners of the lots put up new office buildings instead.
Good thing we have tons of underutilized street space downtown. The city could let food cart owners rent parking spaces along the street.
According to one of the food cart owners at 5th and Oak, it costs about $600 a month for a space downtown. That’s 2 or 3 times what a car parking space would make at about $10 a day. The city could convert some street parking to food cart spaces and turn a hefty profit.

Interestingly, the new food cart pod off of MLK in the CEID is mere blocks away from many other ‘creative’ office buildings, such as the Water Avenue, Eastbank & Olympic Mills Commerce Center, etc. Lots of small offices & creative professionals are holed up in those places!

As far as downtown goes, Olive had a good article showing off some of the new tech companies downtown:

I liked the BAT CAVE concept.

“Creative workers” is an amusing category. Who are the “un-creatives?” Do they eat ? Are they nice too? Who gets to decide who’s a ‘creative’?

…the “creative workers” are like the “choice commuters”…they have options.