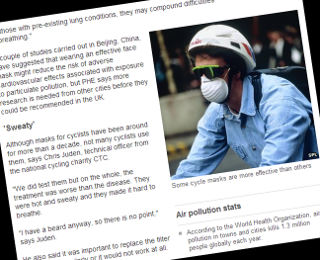 “Be careful out there.” (BBC.co.uk screenshot)

Here’s the bike news that caught our eyes this week:

A helmet for your mouth: The United Kingdom is considering recommending that people on bikes prevent pollution exposure by wearing “cycle masks” over their mouths. Or maybe, some point out, people on bikes could be physically separated from tailpipes.

It must be true: Pope Francis advises future priests and nuns to ditch their expensive cars and start realizing the joys of two wheels: “Bicycles are necessary because there’s a lot of work to do.”

Women’s racing advances: A 90-minute meeting in a hotel lobby last month has resulted in the new Women’s Cycling Organization, which aims to set minimum salaries for female racers and equal prize purses with men.

You can now fly: After 33 years of trying, the first human-powered helicopter achieved liftoff last month for more than 60 seconds.

Does rural sprawl boost suicide? The less dense your county is, the more likely its 15- to 19-year-olds are to commit suicide, a recent international study found.

Royalty on wheels: The new queen of the Netherlands “shuns the chauffeur and arrives on a bike in summer dress and heels to open [a] park in her name.”

Smith on the radio: Freeway-fighting mayoral candidate Jefferson Smith is testing the waters of Internet talk radio with a new show called Thank You Democracy.

Cheap ride: Anybody can bike across the country, but you have to be cool to do it on a $45 bike.

“I’m an elephant, too!” Web comic Bikeyface explains why vehicular cycling doesn’t pass her sniff test, or at least that of people in cars.

Covering the urban boom: As American cities thrive, a media columnist argues that the new generation of local news websites is missing the forest for the trees.

Pay-per-mile taxes begin: Oregonians will be able to choose whether to pay for their car use via gas or mileage-based taxes under a new state law. It might be a step toward scrapping the gas tax for mileage-based charges, part of a so-called “utility model” for paying for our roads.

Linux developer killed: The latest victim of our unsafe streets is the well-known open-source software developer Seth Vidal. Our friends at Path Less Pedaled profiled his Durham bike use in 2010.

How to change behavior? Make it weird: Public smoking bans aren’t actually that good at protecting bystanders from second-hand smoke, but the Atlantic’s Emily Badger argues that they’re effective anyway. “Over time, smoking bans have helped turn cigarette butts into something disgusting, and smokers themselves into pariahs. Smoking bans help change smoking norms.” Seems like there might be a lesson here for other behavioral changes.

Gateway’s lost vision: The Oregonian’s Thomas Boyd and Samantha Masunaga hit on a perfect way to capture the still-unrealized potential of East Portland’s Gateway area: neighborhood activist Arlene Kimura stands in the middle of its auto-dominated sea of parking lot and reads, deadpan, from the list of human-oriented amenities the city once planned for the area.

Bikeshare is the new stationary workout machine: As your 11-second-long video of the week proves, you don’t need a gym membership any more in New York City — just a nearby CitiBike rack. (Via EV Grieve.)

How in heck did THIS not make the Monday Roundup?

Now that’s a news story! I’m with you, this should be broadcast far and wide.

Oregonians will be able to choose whether to pay for their car use via gas or mileage-based taxes under a new state law.

Drive a GMT 800 platform vehicle with the 8L V-8? Dodge your taxes by going pay per mile

They absolutely need to have weight classes for this to make sense. I understand that a Prius driver is not paying their fair share of damage under the current system, but not factoring in weight ignores the physics of road damage.

This does seem to be a pilot project, so I will give ODOT time to tweak the system. When it comes time for full implementation, the choice needs to be:

When given this choice, the public will have to take option 2. ODOT can’t afford to lose revenue by undercharging heavy vehicles.

Based on the aggressive acceleration/deceleration patterns I see of most Prius drivers here in California (that likely bought them for the HOV lane exception), I disagree that they are not paying their ‘fair share.’ Braking puts tremendous wear and tear on asphalt, and hard acceleration is where most fuel is consumed, regardless of whether the vehicle has 3 cylinders or 12. Totally agree that weight would need to factor into any ‘fair pay’ equation though.

Also, significant fuel tax increases should start at the federal level to work to reduce the ballooning Highway Trust Fund deficit. Would love to see a politician run on that platform though…

Il Papa: “I think that bicycles are necessary because there’s a lot of work to do and you have to move around but get a humbler one!”

The pope is a FRED!

Another great story from our friends up north:

The O posted a story this morning about a bike helmet idea conceived by some guys in London, to provide people using that cities bike share system, with helmets if they choose to wear them. Helmet is cheesy-funky looking, made of readily recyclable water resistant paper mache type material. Some interesting comment responses to the story.

OK, I took your bait and checked out the O story and (begrudgingly) the comments. No vitriol (for a change), but I get a kick out of people saying it doesn’t look effective. Sure, I’ve tried wine before because the label was cool, but don’t you think the whole point is to make the helmets affordable and effective? It reminds me of the airplane pilot who flipped his Cessna landing on the snow-covered frozen lake behind a camp we used to stay at as kids in Maine. He claimed that from the sky the snow didn’t look too deep…

To me this is innovation, and these could be dispensed in kiosks along with other items (maps, cheap sunglasses, drinks, snacks) near bike stands. Alas, I saw very few comments applauding these individuals for thinking creatively.

Maybe she’s biking backwards to reset the odometer a.k.a. Ferris Beuller’s Day Off?

re bikeyface. i am not asking to be accepted “as a car,” but as a legitimate user of public space. though you may be onto something, showing the elephants in a mindless stampede rather than, um, walking or ambling or even trotting.

Kind of sick that the auto traffic is represented by wild animals with no rational thought or decision making process. Not to say it’s inaccurate, just disgusting.

Exactly. We’re not asking people to pretend we’re elephants, just to let us go the same places they go and not get trampled.

I like the new format for the Monday Roundup, makes it easier for me to scan the individual stories. Thanks!

Thanks for the feedback, Alain! I’ve been experimenting and this is my favorite so far, too. Keep it coming.