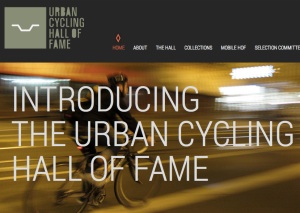 ECHOS Communications, a marketing agency based in Sausalito, California with deep roots in the cycling industry and San Francisco-based Chrome Industries, announced this morning that they’ve launched the Urban Cycling Hall of Fame. The mission of the UCHOF is to “celebrate the culture of urban cycling and showcase the history and people shaping the modern urban bike movement.”

“We felt it was important that somebody take this moment and recognize the people who got us where we’re at today,” said Chrome President Steve McCallion during an interview with BikePortland last month (I’ll share more from that interview next week).

Here’s more from the official announcement:

The UCHOF will recognize three categories of inductees: “the Riders”, the “Organizers”, and “the Makers” and they’ve put out an open call to the public for nominations. Here’s how they define each of the categories:

Riders are recognized heroes who have earned respect from a local to global level. Organizers are the masterminds who work behind the scenes of legendary events that play a pivotal role in the cycling culture. Makers celebrate the true artisans of our time and are those who have proven their excellence and add value to the community we live and ride in.

Similar to other hall of fames, in addition to members the UCHOF will also include a collection of artifacts “that define urban bike culture.” The Collections will premiere at Interbike and will be housed permanently in San Francisco; but portions of the Collections will travel to Chrome’s retail stores. Anyone can submit to the Collections via an online form and Chrome will also scour the country this summer in their 1976 GMC motor home dubbed “Chrome One” (which will be piloted by none other than Amanda Sundvor, a former 21st Avenue Bicycles employee and manager of Chrome’s Portland store).

The UCHOF has Portland roots, not just because of our obvious contributions to urban cycling, but because Portland resident Billy Sinkford (a.k.a. “Souphorse”) spearheaded the endeavor. I sat down with Sinkford (a former messenger himself) and Chrome’s McCallion last month to learn more about the UCHOF. Sinkford says he realizes urban cycling “means a lot of different things to a lot of different people,” but for him it’s about, “those who live by the bike in an urban environment.” McCallion adds that the UCHOF will also include advocates and “people that are proponents of more bikes in the city.”

It will be excited to see how the UCHOF develops in the coming year. One key aspect of its success will be participation from people like you. If you have stories, nominees, or actual artifacts of urban cycling you’d like to share with the UCHOF, check out their website to learn how to get involved. You can also follow the UCHOF on Instagram and Twitter at @UrbanCyclingHOF.

total ” urb ” look that word up 🙂 here –>http://www.urbandictionary.com/ some dude keeps calling me this. lol

I really want to nominate Ayleen Crotty for “Organizer” but when I read, “These heroes always step up and play the pivotal role of race organizer so that the rest of us are able to participate and create amazing memories.” …it makes me think UCHOF is only looking for RACE organizers. Say it ain’t so!

Generalize much? I take particular offence to your misrepresentation of bike riding professionals. Nothing like marginalizing a section of your own group.

since the subject of my comment was the hypey term “urban cycling”, i was absolutely not generalizing about bike riding professionals. and you can correct me if i am wrong but i am pretty sure everyone on the selection committee is/was a messenger, road a fixed gear bike, and broke at least one traffic statute.

The heroes of urban cycling are everyday commuters. They contribute far more to the movement than a messenger, blogger, or speedy bike pro.

Perhaps the difference in this all lays with time and marketing.
25-30 years ago the actual messenger scene in NYC had no idea that its aesthetic based in an underground lifestyle would (like punk rock itself) be a tool of appropriation for company’s to sell yet another version of cool to the general public.
Like Iggy tunes used in Carnival cruise ads, it is a strange development.
I really do not care, and I am glad tons more peeps are on bikes period, but this little “award scheme” does seem a bit self serving to say the least.

Ohhhh. I’m not sure I’ve ever seen one of these lawless “urban” cyclists, then. They sound very exciting. Nothing like the DnD-playing messengers I know.

for everyone’s edification one of the UCHOF judges is riding a famous orange fixie at 0:53 here:

Let us all hope that our youth are not prematurely weaned from the sober milk of elementary bike trains to only be force fed the narcotic urban riding style displayed in Line of Sight. If we truly wish to create future heroes of urban cycling, Line of Sight surely should not be viewed by anyone under the age of 17 without the accompaniment of an adult.

As a father of a boy, I understand your concern, but..
I will say however, that your tone reeks a little bit too much of “rock and roll has got to go!”
Kids will be kids, and sometimes I wonder why my child isnt a bit more troublesome.
I worry the opposite, in that kids are getting pretty coddled in alot of ways.
I have a copy of a photo that features 3 Vietnamese ( I believe, they appear South east Asian) boys, no older than 9 or so, brazing a bike back together, in an alley while smoking some cigarettes.
It is an amazing and inspirational image for me.
I know my child (at least I think I know) isnt even close to holding that kind of tenacity at their age.
He has strengths, but lets face it.. he is a spoiled young white kid in Portland.
I can only hope he will get chased from Pier park by the ranger for drinking before he is old enough, or he wouldn’t be a child.
Besides, I would much rather my sons rebellion be tied to “Line of Sight” than “TapOut”.
There is quite a large difference in intellectual appeal, dont you think?

Year one inductee or get the fuck out: Eben Weiss. Make it happen, UCHOF.