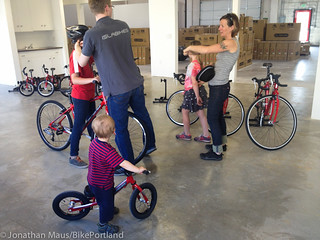 There’s a new bike company based in Portland that caters especially to kids. Islabikes, a seven year-old company based in Shropshire, England, opened their North American headquarters in southeast Portland back in March. To set up their U.S. operation, Islabikes sent one of their founding employees, Tim Goodall. I met Tim yesterday at his warehouse and showroom on the corner of SE 7th and Lincoln.

In the past month or so, Tim has been renovating his space and getting things organized. He’s been open for business and taking appointments for about three weeks now. Currently, the warehouse has hundreds of unbuilt bikes sitting in boxes fresh off the boat from England. In the front showroom is a display of all 13 Islabikes models — from their tiny balance bike to a junior-sized, 700c road bike. “The intention,” said Tim as I admired the line-up, “is that for any child that comes in between one and 11 years-old, there’s a bike that fits them.” 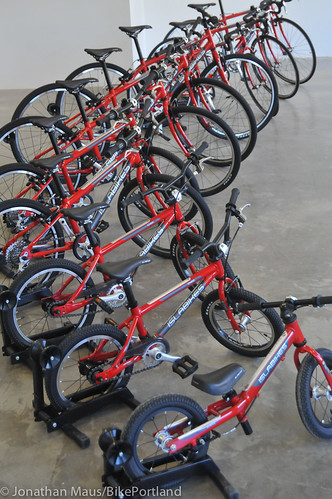 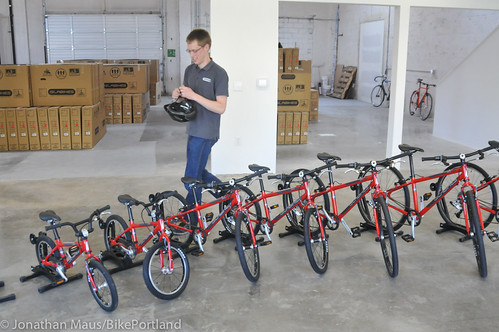 Islabikes’ business model is different. They only sell direct and they fit each customer by appointment before the sale (if you can’t make it to their showroom, they’ll walk you through things on the phone). Customers don’t come in and leave with a bike. They get a child fitted, discuss any accessories or other options, then return a day or so later to pick up a built-to-order rig. They’ve established a successful business in Europe and Tim says things are going great here in Portland. “It’s been a really good start so far… It’s promising.” 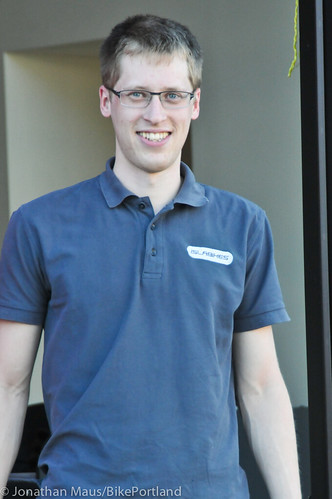 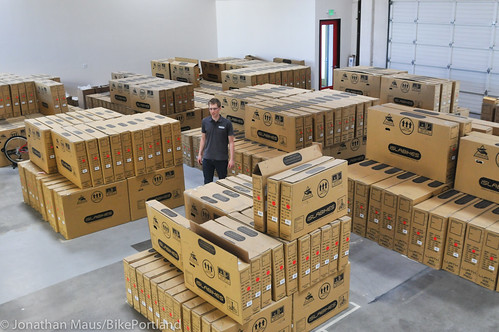 Yesterday I brought my family in for an appointment. Tim offered to set up my 10-year old daughter with a bike to try out for a few months. When we got there, my two-year old burst in the front and bee-lined to the “Rothan” balance bike. Before Tim and I had even exchanged pleasantries, my little boy was astride the balance bike like he owned the thing. He looked more comfortable on it than even his own balance bike at home. And, as Tim pointed out, that’s by design. 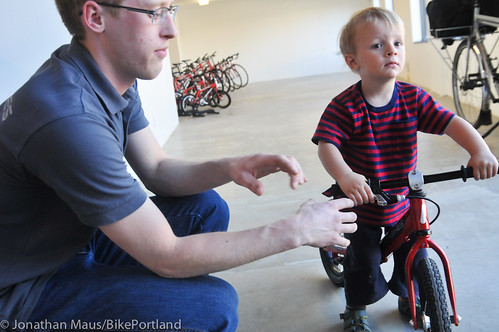 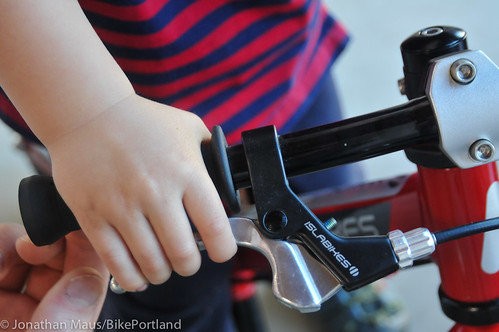 Like all the Islabikes models, even the balance bike has thoughtful and quality kid-centric touches: The wheels have strong rims which allows them to have fewer spokes and thus reduce weight; they use real bearings in the headset; the bolts that hold the wheels on have rounded nuts so little legs don’t get bruised; the hand-brake is specially designed by Islabike for tiny hands. And overall, it’s got the same quality feel you’d expect in a “real” adult bike.

Tim fit my 10-year old onto a 26-inch wheeled “Beinn” model. It looks like a smaller, leaner version of a mountain bike (or like a cyclocross bike with straight bars). He sized her up, adjusted the saddle height, and then fitted her with a helmet. When it was time for a test ride, Tim talked to my daughter about how to use the hand brakes. “Usually kids pull brakes so hard just to get them to stop, so they’re surprised when ours actually work,” he said. 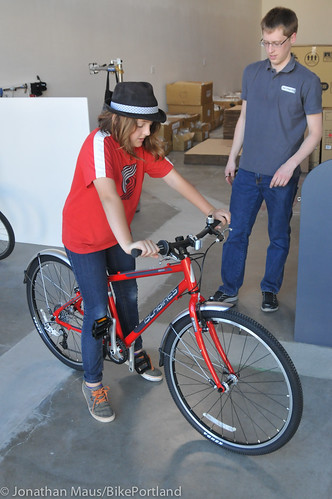 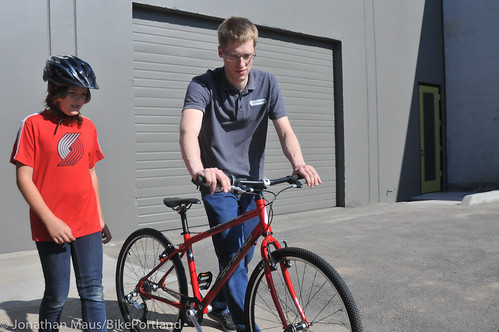 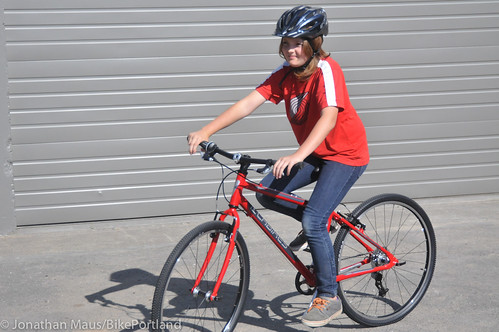 The bike fit well and my little lady was happy. Tim put on a set of fenders and off we went.

I think Islabikes will do well in Portland (and the U.S.). There’s a real lack of quality kids bikes available in this country and Islabikes approaches the market with a dedication and respect I haven’t seen anywhere else. And they also get the human component of running a business. Tim will be a great asset to the community. He’s been with Islabikes since they started and he’s extremely knowledgeable about how to set up a great kids bike, not to mention being a genuinely nice person. If you come to Sunday Parkways this weekend, keep your eyes peeled for his cool orange bike and say “hi”.

For more information, check out Islabikes.com.

We were there just before you yesterday, Jonathan! We also had a great experience. Tim was incredibly helpful finding just the right bike that suits our almost-10-year-old son’s needs and fits him wonderfully now but will be adjustable as he grows (the Beinn 26). Can’t wait to pick it up this afternoon!

I have said this before, but…

Every child learns to pedal a tricycle, inherently a direct-drive fixed-gear.

Learning to finesse cranks through the dead zone when they are vertical is a needless complication to learning the complex and interactive art of steering and balance on a two-wheeler.

It would be much easier and more productive if children’s first bicycles were fixies.

What happens when your kid outgrows the bike? Do they buy them back and refit and resell them used to another kid, or do you just craigslist them?

They have a buy-back program but I’m not sure what they do with the used bikes.

Ironic that their building is set back at an angle from 7th because that’s where an off-ramp from the Mt. Hood Freeway would have gone! The paved triangle makes a handy bike-testing area.

Or even just offering a set-up service for used ones (I could see many people using Craig’s list or inter-family trades if these have good longevity). I’m very excited to see actual transportation features on a kids bike. Integral lights would be a good next step…

Its great to to see this well regarded UK brand being brought to Portland USA. I live near the UK HQ and I know Isla and the team are 100% committed to quality bikes for children of all ages.

I have heard a lot of people say a lot of good things about Islabikes here in the UK and I have friends whose kids ride them.

But unfortunately my daughter (who is admittedly not the tallest kid in her class) has only just become tall enough for a 14 inch wheeled bike recently, at roughly 4 1/2 years old. For eight months she’s been riding to school on a Specialized Hotrock 12 (without stabilisers), because the smallest pedal bike Islabikes do is a Cnoc 14 (ie 14 inch wheels). They advertise it as age 3 and up, but this only applies if your child is quite a tall three-year-old (perhaps a medium sized boy or a very tall girl).

So, they seem to be nice (if rather expensive) bikes, but as far as “any child that comes in between one and 11 years-old” is concerned, Islabikes have failed.