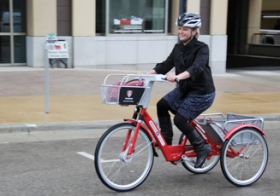 Lots of fun stories, news, and other stuff to share from last week, so let’s get started…

— It is truly exciting to watch the launch of CitiBike bike-share in New York City. According to Streetsblog, over 4,000 people signed up for a membership in the first 24 hours.

— Almost as cool as the launch of CitiBike was news from Madison, Wisconsin that B-cycle has introduced a trike into their bike-share fleet.

— In other news about pedal powered vehicles with more than two wheels, a judge in Ohio ruled in favor of a man who rides a quadricycle on city streets and they redefined the state’s definition of “bicycle” in doing so.

— New figures from AAA show that the cost of owning a car is up to $9,000 a year thanks to maintenance, insurance and fuel costs.

— That price tag might help explain why younger Americans are driving so much less these days (while public transit and bicycle use are skyrocketing). And there are other factors too, as explained by The Washington Post’s Wonkblog.

— We’ve all heard how women played a major role in the history of bicycling. Now this story about Annie “Londonderry” Kopchovsky, who set out to ride around the world in 1894, takes it to a whole new level.

— NPR took a look at a singlespeed bike that can go nearly 100 mph.

— Is more driving always tied to positive economic growth? Research from the Federal Highway Administration, Exploring the Relationship between Travel Demand and Economic Growth is inconclusive, but it’s a helpful resource to learn from.

— Check out this article from Wisconsin Bike Federation and you’ll have some good fodder for debate next time someone you know rants about how “all bicyclists are scofflaws!”

— And if that scofflaw tirade devolves into a “war on cars” rant, point the person to this article in the Washington City Paper: There Is No War on Cars So why do we keep hearing so much about it?.

— A disturbing news story from Baltimore about people being assaulted while riding bikes.

— And in Seattle, a woman was beat up by a man who tried to steal the bike she was riding.

— If you haven’t done so yet, you simply must check out the coverage of members of the House Appropriations Committee grilling US DOT Secretary Ray LaHood about his support for the Columbia River Crossing project.

— It’s not hard to see why House Republicans are wary of the CRC — especially when you find things in the project budget like a $17 million museum.

— Guess who got interviewed on The Bicycle Story last week?

— After ten years, the Mayor of Toronto isn’t too thrilled with BIXI, his city’s bike-share system.

— Here’s an obvious idea from New York City I could see being put to use in Portland: Bicycle parking protected bike lanes.

— OurKickstarter of the Week is Moberi: A Portland-based effort to create a pedal-powered smoothie empire.


If you come across a notable bike story, share it with us and we’ll post it here on the Monday Roundup.

Sheeesh! $9,000 a year for car ownership! This makes me so happy I do not rely on my car which pretty much means the cost of ownership on my 10+ year old car is minimal monthly insurance.

I am not rich by any means, but this is the number one reason my friends think I make more money than I actually do.

Yeah, cars are really, really expensive. I hope that my family can go down to one car (from two) when mine finally kicks the bucket, and we can save even more money.

There is another side to the coin. The following is an excerpt from a Brookings Institute report from 2009.
As explained below, however, census data imply that the majority of these zero-vehicle households face economic constraints to automobile ownership. Not onlyare cars themselves expensive, but households with lower incomes may also face higher costs for financing
a car. Used cars offer a cheaper sticker price but tend to incur higher annual operating costs. Not owning a car may impart further economic disadvantage as well, as workers with cars work more hours per week than those without cars, enabling them to earn higher incomes.

Even though our car is an old biodeisel, because of the combination bike cargo trailer and flex car we are going completely careless by fall.

We also have already reserved the dutch tub for our Commitment Celebration weekend in a few months…hopefully we don not have one of those odd hot spells….

Wow–amazing Monday roundup, Jonathan! Thanks so much!!

And I think that adding several trikes to our forthcoming bike share program would be a *great* idea. No need to rent a car for hauling a few boxes, etc.

How do you watch videos on streetfilms.org posts?

I click on the “play” triangle that shows up with a mouseover in the embedded video, bottom left. You can also click on the “Vimeo” logo, bottom right, and it will play on Vimeo.com.

The trike could probably use a much wider seat for some of the people that are inclined to use the trike. If you are very heavy you might not want to put your weight on a skinny saddle.

are
Reply to  jim

that is actually a pretty wide saddle. much wider, you get the insides of your thighs chafed as you pedal. the saddle literally needs to support only your ischial bones.

I really liked the Bicycle parking protected bike lanes video by Clarence Eckerson, Jr. of streetfilms. Great interviews with supportive business owners and it seems like a win/win/win/win (business/peds/bikes/cars). I’d love to see that here in Portland!

I’m familiar with the PSU cycle track, I even rode it tonight. But as far as I know, there’s no *bicycle* parking protected bike lanes there. And it doesn’t seem to be a great candidate as there’s plenty of bike parking around PSU and there’s not a lot of retail space creating a busy sidewalk. I think it would work pretty well on Hawthorne or Belmont.

are
Reply to  Jonathan Gordon

i try not to use onstreet corrals, as they expose my bike to being crashed into by cars