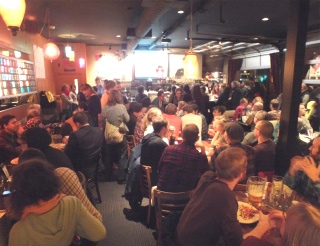 It was a packed out for the 2nd annual
Transportation Trivia fundraiser last night.
(Photo: Mary Nichols)

Portland is full of transportation wonks (a.k.a. geeks or nerds) and last night it seemed like nearly every one of them was packed into the Radio Room. The event that brought them all together was Transportation Trivia Night, a fundraiser for the Community Cycling Center.

The emcee on the night was none other than the Division Manager for the City of Portland Bureau of Transportation’s Signals, Street Lighting, & ITS Division, Peter Koonce.

20 teams of six assembled themselves around tables of drinks and food and pooled their collective wisdom to answer questions on a range of topics. The teams competed not just on trivia, but also for most creative team name. A sampling of the entries included; Chicken Fried Bicycle, Vulnerable Roadway Musers, Cycle Track Stars (my team!), the Mother Mudrucking Multimodal Maves, CRC Shells by the Sea Shore, Streetcars Named Desire, and the winning team name — Roads Scholars.

Check a few photos from the action: 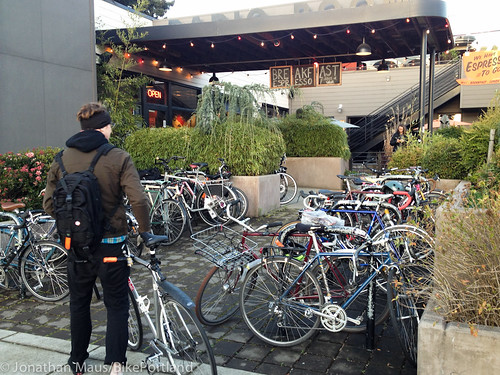 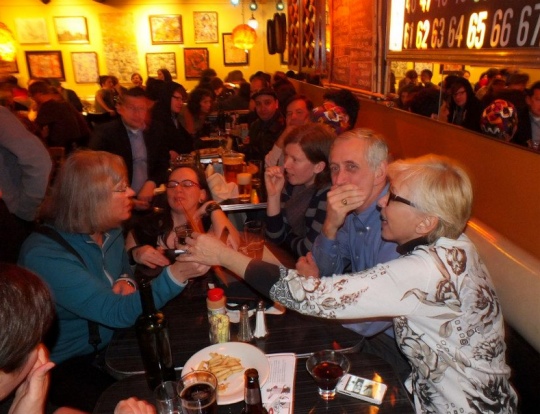 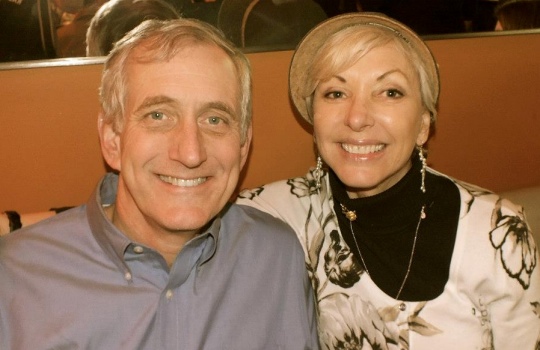 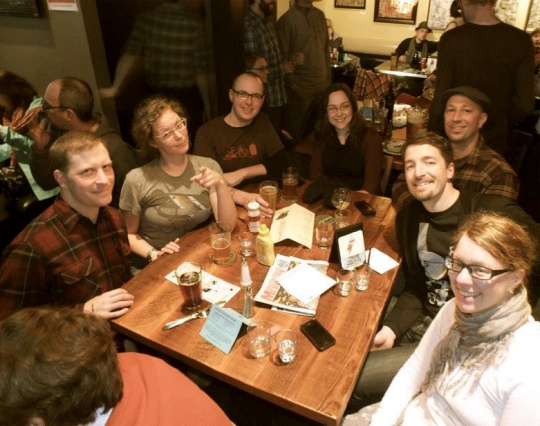 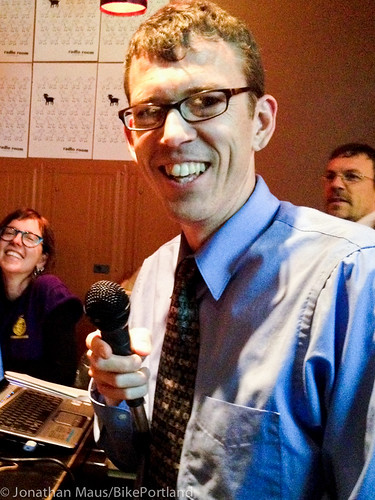 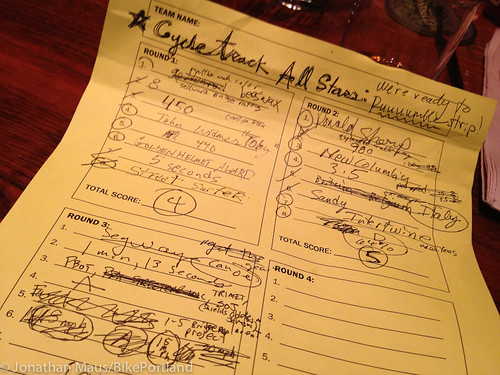 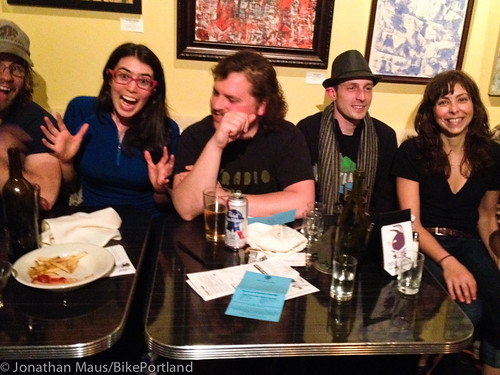 And here’s a sampling of the questions:

– According to the National Bridge Inventory, what was the sufficiency rating of the Sellwood Bridge before it’s move? (Scale 0-100) (Answer: 2)

– What is the length, in feet, of the floating walkway on the Eastbank Esplanade? (Answer: 1200)

– What is the official color of the new buffer zone on NE Multnomah? (Answer: Beeswax)

– What share of road spending in Oregon is covered by general taxes (as opposed to user fees)? (Answer: 64%)

As the night wore on, things got a bit crazy. There was chanting, taunting, and general merriment in all directions. It’s really amazing what happens when you get so many certifiable smart people crammed into one room.

The big winners on the night were the crew from Chicken Fried Bicycle (didn’t get a good photo because all I had was my phone). They won in a tie-breaker over the Vulnerable Roadway Musers. (Full rundown of all the scores and other details on the CCC blog.)

When the donations were tallied up at the end of the night, we’d raised $2,316 for the CCC and $650 of that went directly to sponsor 13 bikes for the Holiday Bike Drive. Fun for a good cause and a chance to flaunt the inner transportation geek in all of us. What a night! Thank you Community Cycling Center and Radio Room for hosting!

For more photos, check out the gallery on Radio Room’s Facebook page.

“- What share of road spending in Oregon is covered by general taxes (as opposed to user fees)? (Answer: 64%)”

Hey local media! Can we get wall-to-wall coverage of that (certified?) fact? Hey, Oregonian! How about it?!

Some data on user fees and road costs.
http://taxfoundation.org/article/gasoline-taxes-and-tolls-pay-only-third-state-local-road-spending

Second place team was Vulnerable Road Musers, the Hales tiebreaker was just for one of the earlier rounds.

Great event by the CCC. Congrats to last year’s innovative first-time event, and a great repeat performance in 2013.

I always get pretty excited when I see a new round of bicycle fun/advocacy/organizational development come online.

Keep being creative and innovative folks, and come up with new and different ways we can dream up new events to add to the annual calender.

So many wonks and geeks in one small space! I heard someone say that if there had been a natural gas explosion last night, Portland’s stock of active transportation advocates would have been decimated and freeways would have started sprouting up out of the ground by morning.

Thank you CCC, let’s do this again soon!

What is the circumference of the inner curb of Ladd circle?